Federer, meanwhile, became the first man to lose a Wimbledon singles final after holding match points since 1948 when John Bromwich failed to convert three of them against Bob Falkenburg.

How did Roger Federer end up losing the 2019 Wimbledon final?

It was a question that was being asked over and over again at the All England Club on Sunday after the crowd favourite did almost everything better than Novak Djokovic -- except convert the two match points he earned deep into the fifth set.

Those two misses at 6.21pm local time (1721 GMT) on Sunday are likely to haunt the Swiss great for many years to come and maybe even for the rest of his life.

When Federer was 8-7 40-15 up on his serve, he was a shot away from holding aloft the Challenge Cup for a record ninth time and claiming a record-extending 21st Grand Slam title.

Aged 37 and 340 days, he was a shot away from becoming the oldest man to win a major in the professional era.

The fact that the one single winner he needed so much never came on Sunday will hurt -- and hurt badly.

Only 48 hours after Federer had said how tennis can "sometimes be brutal" as "there are no draws in our sport", he felt the full brunt of those feelings when a forehand wide on his first match point followed by a cracking cross-court passing shot winner from Djokovic on the second killed off his dreams.

"I don't know what I feel right now. I just feel like it's such an incredible opportunity missed, I can't believe it."

Neither could the majority of the 15,000 crowd who created a raucous football stadium-like atmosphere on Centre Court.

Fans were so desperate to see Federer win a 21st major -- and widen the gap with Rafael Nadal (18) and Djokovic (16) -- that they started giving standing ovations to every error flying off the Serb's racket as the match headed towards a crazy climax.

But for all the partisan cheers and roars, it was top seed and defending champion Djokovic who ended up crawling over the finishing line as he picked up his fifth Wimbledon title.

Federer, meanwhile, became the first man to lose a Wimbledon singles final after holding match points since 1948 when John Bromwich failed to convert three of them against Bob Falkenburg.

For a player who sets milestones almost every time he steps on a court, this is not one he will be in a rush to stick into his own personal scrapbook.

Federer is no stranger to coming off second best from being a point away from victory -- he suffered the same fate against Kevin Anderson in last year's Wimbledon quarter-finals and versus Djokovic in the 2011 US Open semi-finals.

However, even the world number three will be wondering how he could have outclassed his great Serbian rival in almost every department and still not ended up with the trophy he called that "golden thing".

The statistics suggested Federer should have won.

Three weeks shy of his 38th birthday, he will not want to get consumed by the "what ifs" that will no doubt play over and over in his mind.

No matter where Federer goes or what he does, even he will find it difficult to escape the question: Will he ever get a better chance to win that 21st major title?

The Swiss has now featured in the two longest men's singles finals at Wimbledon.

Eleven years after he described his defeat by Nadal in the 2008 five-set twilight epic as "brutal", Federer was again left wondering what went wrong.

"I know what I did well, how close I was. You try to forget, try to take the good things out of this match. There's just tons of it," said Federer.

"Similar to '08 maybe. For now it hurts, and it should, like every loss does here at Wimbledon.

"Sure there's similarities (with the defeat in 2008). I'm the loser both times, so that's the only similarity I see."

© Copyright 2020 Reuters Limited. All rights reserved. Republication or redistribution of Reuters content, including by framing or similar means, is expressly prohibited without the prior written consent of Reuters. Reuters shall not be liable for any errors or delays in the content, or for any actions taken in reliance thereon.
Related News: Roger Federer, Novak Djokovic, John Bromwich, Bob Falkenburg, Rafael Nadal
SHARE THIS STORYCOMMENT
Print this article 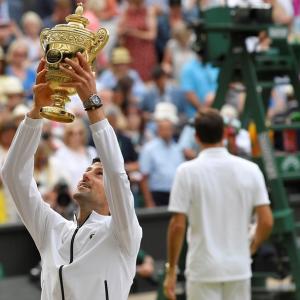