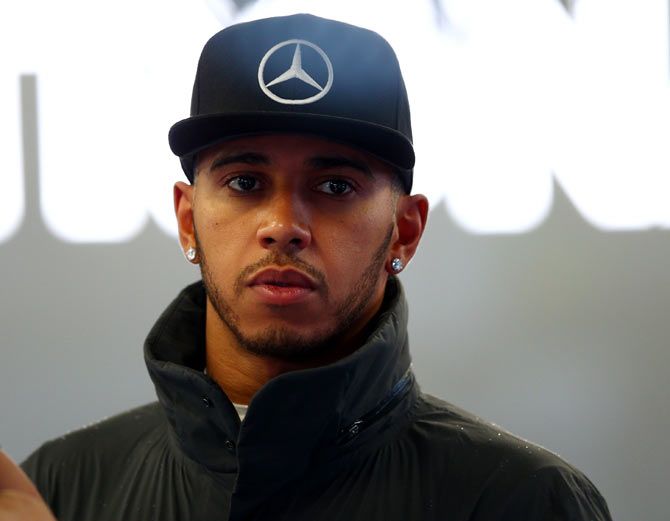 IMAGE: Great Britain and Mercedes GP's Lewis Hamilton looks on in the garage during practice for the Formula One Grand Prix of Russia at Sochi Autodrom in Sochi on Friday. Photograph: Mark Thompson/Getty Images

McLaren had the vision but Mercedes have the smell of success, as far as Formula One world champion Lewis Hamilton is concerned.

The 30-year-old, who could clinch his third world title within a matter of weeks, told British reporters at the Russian Grand Prix that he would always owe an immense debt to his former McLaren boss Ron Dennis.

However, he added that current employers Mercedes felt much more like home.

"Ron was amazing with me... I would not be here if this guy had not noticed me when I was 10 and actually taken notice. The majority, if not all, saw me as another kid who came along," Hamilton told reporters.

"This guy has unbelievable vision. What he’s created there (at McLaren) -- the place is beautiful -- I’m just saying as someone who loves more authentic racing teams, old school cars, I get that smell (at Mercedes).

"When I walk into our factory I get that racing smell."

Hamilton won his first championship with McLaren in 2008, the year after his Formula One debut, after being backed by Dennis and McLaren's then-engine partners Mercedes through the junior series.

The Briton moved to Mercedes in 2013, after winning 21 races with McLaren, despite some pundits warning he was making a mistake.

He won 11 races last year, when he took his second championship, and eight so far this season. His 41st and most recent victory in Japan equalled the career tally of his boyhood idol and late triple champion Ayrton Senna.

McLaren meanwhile have not won a grand prix since 2012.

Before Japan, Hamilton had posted on Instagram a photograph of himself as a youngster standing alongside Dennis along with a heartfelt tribute.

The champion said he had felt it needed saying.

"Every day whilst I’m racing for this team there’s not a day that goes by that I’m not grateful for the moments he’s given me to enable me to have the life that I have."

That said, he felt Mercedes -- whose Brackley factory was previously owned by BAR, Honda and Brawn -- offered more freedom than he ever had at McLaren's award-winning Woking headquarters.

"If you go to McLaren it’s a different animal," he said.

"They’ve got great individuals... but their setup was different. You walk into that building and you don’t want to touch anything.

"When I came to this team it was more like my old Formula Three team, the way the building was built, obviously on a much bigger scale. It feels like more of a racing team. The way everyone works together."

© Copyright 2020 Reuters Limited. All rights reserved. Republication or redistribution of Reuters content, including by framing or similar means, is expressly prohibited without the prior written consent of Reuters. Reuters shall not be liable for any errors or delays in the content, or for any actions taken in reliance thereon.
Related News: McLaren, Lewis Hamilton, Ron Dennis, BAR, Sochi Autodrom
SHARE THIS STORYCOMMENT
Print this article