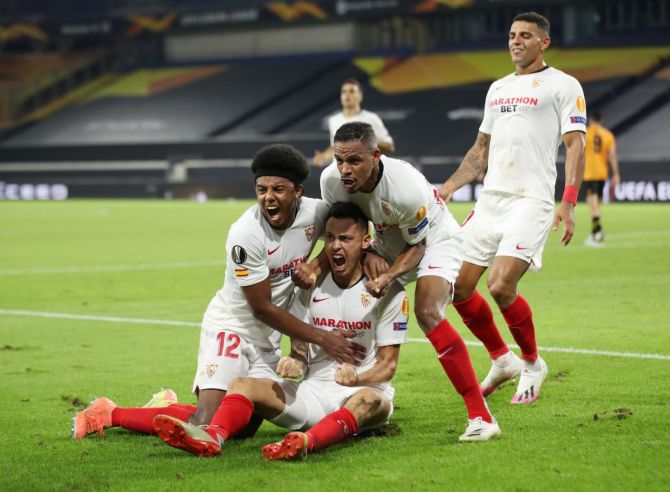 Sevilla midfielder Lucas Ocampos headed a late goal to snatch a 1-0 win over Wolverhampton Wanderers as they reached the Europa League semi-finals on Tuesday after the English side paid the price for an early penalty miss.

Raul Jimenez saw his hesitant spot kick easily saved by goalkeeper Bono in the 13th minute of the single-leg tie and Wolves failed to muster a shot on target after that as former Real Madrid and Spain coach Julen Lopetegui's side took control.

Five-times winners Sevilla, who will face Manchester United in the last four in Cologne on Sunday, enjoyed 73% of possession and won 14 corners to none for Wolves in a one-sided game.

Wolves, playing in their first European quarter-final for 48 years, appeared to feel the effects of a marathon season which saw them play 59 matches, including 17 in the Europa League starting at home to Crusaders on July 25 last year.

Yet the Midlands team made a promising start with Adama Traore at the centre of things. Having set up an early chance which Raul Jimenez headed straight at Bono, the Spaniard powered into the area and was tripped from behind by Diego Carlos.

Jimenez, who usually waits for the keeper to move, appeared caught in two minds and his effort was comfortably stopped by Bono with a dive to his left. It was the Mexican's first penalty miss for Wolves after converting his previous eight efforts.

Sevilla dominated the match after that, passing the ball around in the centre of the pitch, but it was fairly unproductive possession and they created few openings.

The second half was a similar story with Wolves apparently happy to allow Sevilla to knock the ball around in midfield.

But the Spaniards grew more dangerous towards the end and broke through with two minutes left. Their 13th corner was rolled to Ever Banega and he curled a cross into the area which Ocampos flicked past keeper Rui Patricio. 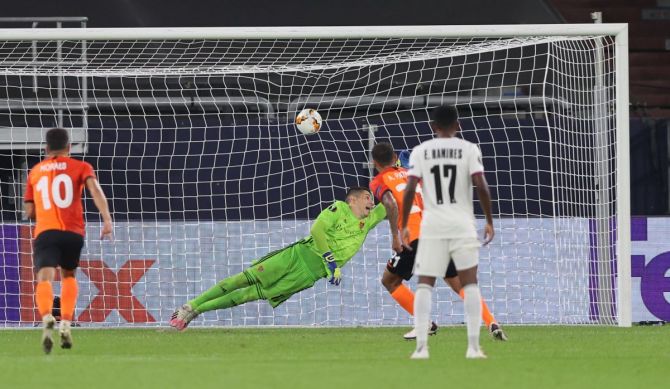 Shakhtar Donetsk booked a clash with Inter Milan in the Europa League semi-finals after goals from Brazilians Junior Moraes, Taison, Alan Patrick and Dodo gave them a 4-1 win over FC Basel in a one-sided last-eight clash on Tuesday.

The Ukrainian champions will take on Inter in Duesseldorf on Monday after Sunday's semi-final in Cologne between 2017 Europa League winners Manchester United and Sevilla, who have won Europe's second-tier competition a record five times.

The final is set for August 21 in Cologne.

Sevilla clinched their berth with a 1-0 win over Wolverhampton Wanderers in Tuesday's other quarter-final thanks to a late goal by Lucas Ocampos.

Shakhtar, who won Europe's second-tier club competition in 2009, missed a string of chances to triumph by an even bigger margin as they dominated the match with crisp one-touch passing and superior close control.

Moraes headed the Ukrainian side into a second-minute lead after a howler by Basel's Serbian goalkeeper Djordje Nikolic, who was beaten to the ball by the striker after rushing off his line to meet a Marlos corner.

Nikolic made amends with several good saves in the first half but was powerless in the 22nd minute when Taison capped a lightning Shakhtar break with a deflected shot after good work by Marlos and a clever dummy by Patrick.

Marcos Antonio rattled the woodwork with a long-range effort in the 40th minute before Shakhtar took their foot off the pedal in the second half, content with keeping possession as their rivals chased shadows.

Still, Patrick made it 3-0 with a 75th-minute penalty after Yannick Marchand fouled livewire Taison in the area and right back Dodo added the fourth in the 89th minute, with the goal awarded after a VAR check for offside.

Substitute Ricky van Wolfswinkel netted a stoppage time consolation for Basel from close range but the Swiss side had little to cheer after being blown away by their opponents.

© Copyright 2020 Reuters Limited. All rights reserved. Republication or redistribution of Reuters content, including by framing or similar means, is expressly prohibited without the prior written consent of Reuters. Reuters shall not be liable for any errors or delays in the content, or for any actions taken in reliance thereon.
Related News: Sevilla, Shakhtar Donetsk, Wolverhampton Wanderers, Taison, Raul Jimenez
SHARE THIS STORYCOMMENT
Print this article 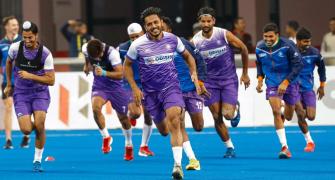 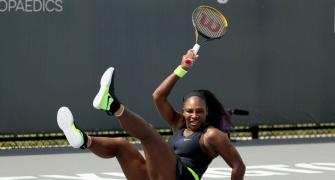 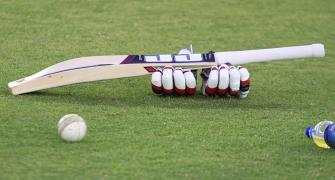 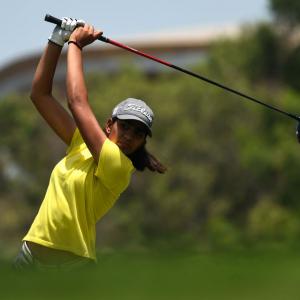 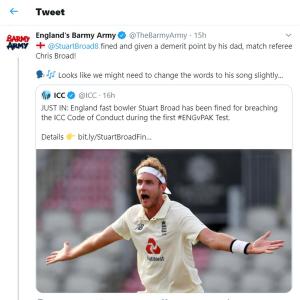