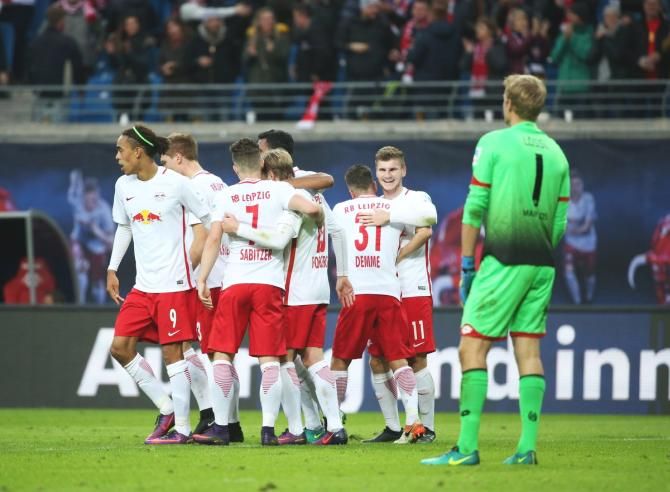 RB Leipzig continued their remarkable first season in the Bundesliga when they brushed aside Mainz 05 3-1, their fifth win in a row, to go level on points with leaders Bayern Munich on Sunday.

Timo Werner scored twice as Leipzig, who trail Bayern on goal difference and are unbeaten after 10 games, raced to a 3-0 lead before halftime.

Bayern and Leipzig both have 24 points from seven wins and three draws and are four clear of third-placed Hoffenheim, who are also unbeaten.

Hosts Leipzig immediately took control when Werner put them ahead from close range in the third minute after Emil Forsberg's shot was deflected into his path.

Leipzig, founded only in 2009, doubled their lead in the 21st minute with Werner turning provider as he burst down the right and squared the ball for Forsberg, who turned it in from close range.

The same pair combined again one minute before halftime, with Werner finishing the move with a left-foot shot, the 20-year-old's fifth goal of the season.

Werner was denied a hat-trick when his effort was blocked by Jonas Loessl on the hour. Although Leipzig continued to dominate the game, Stefan Bell headed in a consolation goal for Mainz in the 74th minute.

"We did a lot of what we had set out to do today," said Leipzig coach Ralph Hasenhuettl.

"The goals put us in a very good situation but Mainz did not give up and that was impressive.

"We learned a lot from this game. It was a very mature performance."

Schalke, who lost their first five games, continued their climb up the table by beating lowly Werder Bremen, helped by two goals from Alessandro Schoepf.

The Austrian headed Schalke in front from a rebound in the 35th minute after Max Meyer's header hit the crossbar.

The second goal also came from a rebound three minutes later when Naldo's long-range free kick was parried by Felix Wiedwald and Nabil Bentaleb prodded the ball in.

Schoepf turned villain just before halftime when he gave away a penalty for a clumsy challenge on Serge Gnabry, who took the penalty himself and sent Raul Faehrmann the wrong way.

But Schoepf made amends when he scored his second goal of the game in the 63rd minute, controlling Sead Kolasinec's cross and slotting the ball into the bottom corner. Schalke are 12th with 11 points while Bremen remain 16th, the relegation playoff spot, with seven.

PSG in but lose Cavani to injury, Nice slump to first defeat 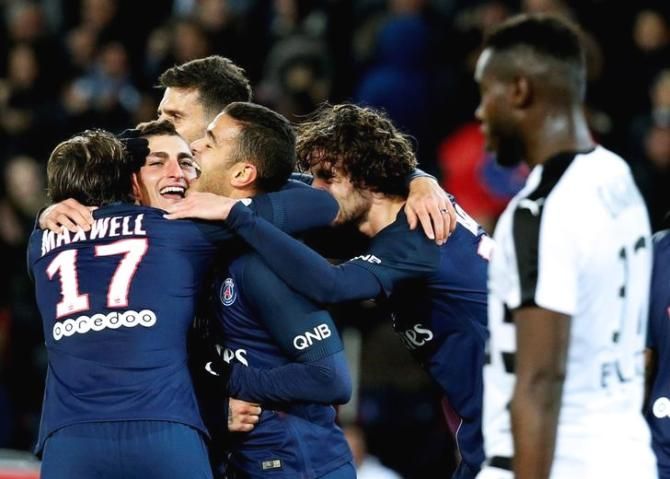 Champions PSG are third on 26 points, behind Monaco, who destroyed Nancy 6-0 on Saturday, on goal difference, but three points behind Nice after the Azureans slumped to a 1-0 defeat at strugglers Caen.

PSG went ahead thanks to Gelson Fernandes's own goal and Cavani doubled the tally before the break, three minutes before limping off the pitch with an injury.

Adrien Rabiot and Marco Verratti scored the other two goals after the interval as PSG also hit the woodwork three times in an awe-inspiring display.

Benoit Costil deflected Cavani's header on to Fernandes, the ball bouncing off the midfielder into the goal after 31 minutes.

Cavani made it 2-0 in the 42nd minute with a splendid 20-metre lob but was forced to leave the field with a thigh injury, being replaced by Jese after scoring his 11th goal in as many league appearances.

Rabiot put the result beyond doubt in the 67th minute with a long-range effort and Verratti rounded it off with a neat half-volley from inside the box from Hatem Ben Arfa's cross.

"We're getting where the coach wants us to go and it's paying off, everyone is motivated," said captain Thiago Silva, referring to Unai Emery, who took over from Laurent Blanc during the close season.

Nice had their first Ligue 1 defeat of the season as Ivan Santini's first-half penalty secured a 1-0 victory for strugglers Caen on Sunday.

Three minutes before the break, Malang Sarr lost the ball to Ronny Rodelin, who sped into the area where he was brought down by Henrique Dalbert. Santini converted the resulting penalty by wrongfooting Nice keeper Yoan Cardinale.

Nice went close in the 63rd minute when Belhanda's through ball found Balotelli, only for the Italian's shot to crash against the post.

The visitors were more aggressive but Caen's defence held firm to help them escape the relegation zone as they moved up from 18th to 15th on 13 points.

Lapadula, 26, who has spent most of his career in Serie B, finally made his mark in the top flight when he scored with a cheeky backheel from Suso's shot with eight minutes to go at Palermo.

Suso had given Milan an early lead, firing home after Palermo goalkeeper Josip Posavec and defender Haitam Aleesami collided with each other, but Ilija Nestorovski levelled for the Sicilians.

Massimo Maccarone ended Empoli's eight-game goal drought when he put them ahead after 12 minutes at Pescara and "Big Mac", who himself had not scored for six months, was on target again one minute before halftime.

Manuel Pucciarelli scored in between and Riccardo Saponara added a fourth in the 89th minute.

Atalanta climbed to fifth with a 3-0 win at Sassuolo, their sixth win in seven matches. Fiorentina were held 1-1 at home by Sampdoria as were Genoa by Udinese.

© Copyright 2021 Reuters Limited. All rights reserved. Republication or redistribution of Reuters content, including by framing or similar means, is expressly prohibited without the prior written consent of Reuters. Reuters shall not be liable for any errors or delays in the content, or for any actions taken in reliance thereon.
Related News: Leipzig, Mainz, Edinson Cavani, Timo Werner, Nice
SHARE THIS STORYCOMMENT
Print this article 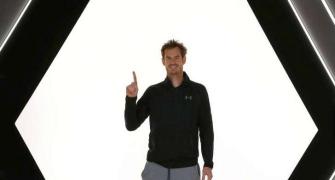 Paris Masters in pocket, Murray just wants to enjoy No1 status for now 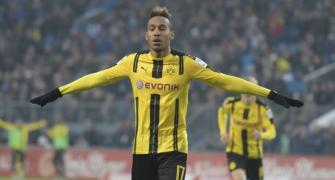 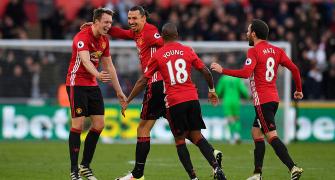 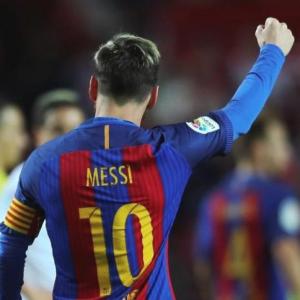