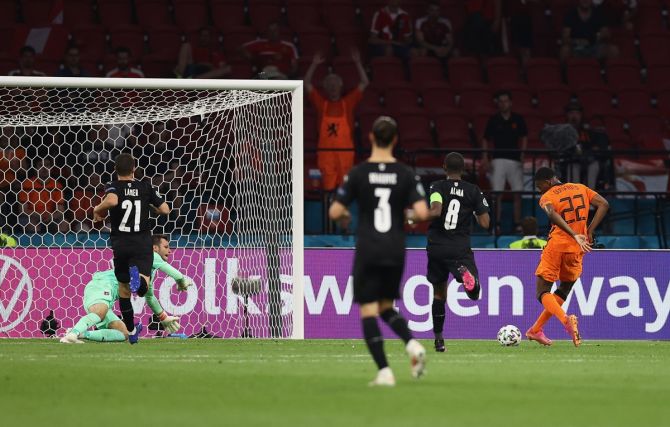 An early Memphis Depay penalty and a Denzel Dumfries goal gave the Netherlands a convincing 2-0 victory over Austria on Thursday and a place in the Euro 2020 last 16 as Group C winners.

Depay's 11th-minute spot-kick provided an early platform for the home side and flying full back Dumfries proved a popular scorer at the Johan Cruyff Arena as he doubled the tally in the 67th minute with his second goal in as many matches.

Dumfries had netted the late winner as the Dutch edged Ukraine 3-2 on Sunday but there was less of a frenetic feel this time as they coasted through the match. 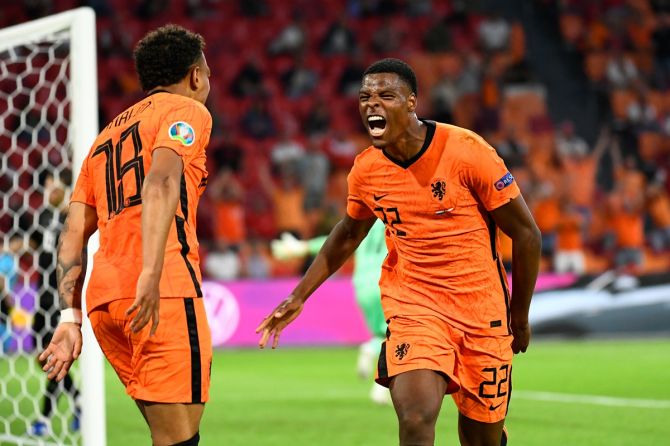 They were awarded the penalty after Dumfries was caught on the foot by Austrian captain David Alaba on the corner of the penalty area. But it was only given after referee Orel Grinfeeld consulted the pitch side VAR monitor, with Depay dispatching the spot-kick powerfully underneath the diving Daniel Bachman.

Depay had two more first-half chances, hitting the side netting with snap effort after another Alaba mistake and conjuring up a horror miss five minutes before the break. IMAGE: Denzel Dumfries is fouled by Austria's David Alaba, leading to a penalty being awarded to the Netherlands. Photograph: Koen van Weel/Getty Images

Attack partner Wout Weghorst played a square ball in for the unmarked Depay at the back post, but he rushed the effort and skied his side-footed effort wide.

The second goal came after Donyell Malen beat the offside trap and unselfishly played in the charging Dumfries, whose finish was enthusiastically celebrated by teammates and the 16,000-strong crowd.

"It's starting to feel like a fairytale. We are really growing, it feels good," said Dumfries. "We controlled the game and dominated all aspects and deserved the win." 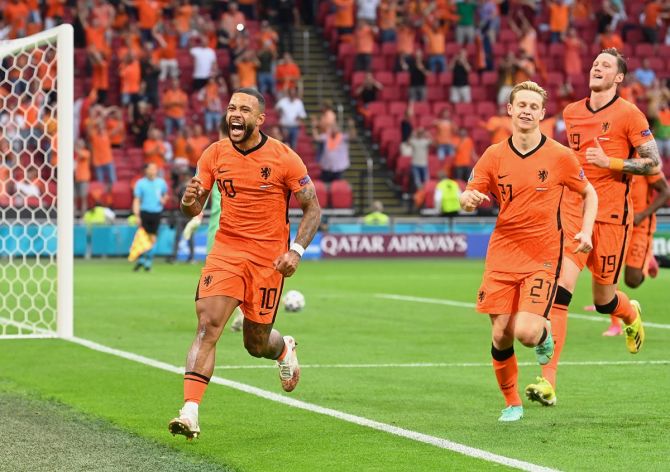 The visitors' first effort on goal came as late as the 84th minute but substitute Karim Onisiwo headed straight at home goalkeeper Maarten Stekelenburg. Without the suspended Marko Arnautovic, Austria lacked a cutting edge in attack that they will need against Ukraine on Monday.

Austria will secure a berth in the knockout stage if they beat Ukraine but could also qualify anyway if they end up as one of the four best third-placed teams from the six groups.

"We weren't brave enough. We gave away too many balls too easily and invited them to go on the counter-attack. We created a few opportunities ourselves but were not clinical enough to finish them," said Austria coach Franco Foda.

© Copyright 2021 Reuters Limited. All rights reserved. Republication or redistribution of Reuters content, including by framing or similar means, is expressly prohibited without the prior written consent of Reuters. Reuters shall not be liable for any errors or delays in the content, or for any actions taken in reliance thereon.
Related News: Denzel Dumfries, Memphis Depay, IMAGE, Austria, David Alaba
COMMENT
Print this article 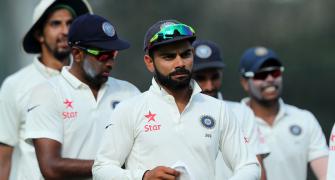 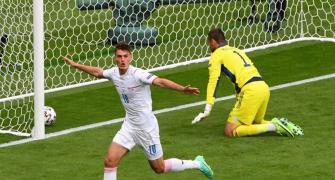 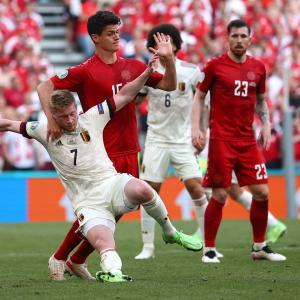 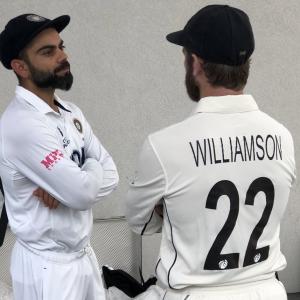