Euro: Russia back on track after win over Finland; Wales beat Turkey A goal in first-half stoppage time by Aleksei Miranchuk got Russia's Euro 2020 campaign back on track as they beat Finland 1-0 in Group B on Wednesday.

The Russians, who remain unbeaten against the Finns since their first meeting in 1912, made amends for their opening loss to Belgium as the group remains wide open.

The Finns, winners 1-0 over Denmark in their first game that was marked by Christian Eriksen's heart attack on the pitch, almost made the perfect start when Joel Pohjanpalo's third minute header beat the Russian keeper but was ruled offside after a VAR review.

It was the hosts, fired up by the home crowd, who took control in the first half, with the Finns sitting back and soaking up the pressure. 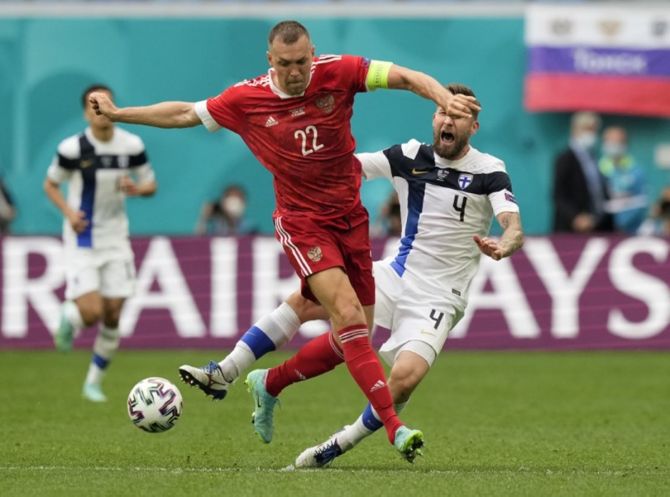 The visitors waited for the occasional break and both Pohjanpalo and Teemu Pukki tested goalkeeper Matvei Safonov.

An injury to Mario Fernandes after a rough fall in the 26th minute did not shift Russia's focus and his replacement Vyacheslav Karavaev almost tapped in a cutback at the far post minutes after coming on.

Their dominance finally paid off in stoppage time thanks to a piece of magic from Miranchuk, who took on two defenders on the right, changed direction and scooped the ball into the far corner with a superb left-footed effort with Russia's first shot on target.

The Finns shot out of the blocks after the break with Pukki carving out two chances early on.

That, however, came with a risk as it opened up spaces for Russia, who were a threat on the break with Rifat Zhemaletdinov's low shot veering just wide in the 67th and Daler Kuzyaev's curled effort forcing a superb save from keeper Lukas Hradecky as Finland's energy gradually faded.

Russia held on to earn three points, with Stanislav Cherchesov's side up to second in the standings on three, ahead of Finland thanks to the head-to-head result. Belgium, who beat Russia 3-0 in their opener, top the group ahead of their game against Denmark on Thursday. Captain Gareth Bale inspired a scintillating 2-0 victory for Wales over Turkey on Wednesday, giving the Dragons a big leap towards the European Championship knockout stages and reviving memories of their 2016 run to the semi-finals.

Midfielder Aaron Ramsey missed two early chances, but made no mistake just before halftime when he chested down Bale's perfect ball over the defence to slot past the goalkeeper.

Wales could have doubled the lead at the hour mark when Bale was tripped by Zeki Celik and awarded a penalty, but the Welsh skipper skied his effort after a stuttering run up.

Wales were rewarded for their superiority throughout when they scored right at the death as a corner was played short and defender Connor Roberts was on hand to divert another Bale pass past goalkeeper Ugurcan Cakir.

"I'm delighted with the win. We fought hard, we worked our socks off like we always do," Bale said. The Group A win thrilled the few hundred Wales fans - outnumbered by Turkish supporters at Baku's Olympic Stadium - and many more at home who are dreaming of another Euros run like their first appearance in the tournament five years ago.

The surprise semi-finalists then, who next play Italy, now have four points, after drawing with Switzerland in their opener. Turkey, without points, take on the Swiss next.

Remarkably, Wales now have the best winning percentage in the Euros' history: 63 per cent or five wins in eight games.

Wednesday's man-of-the-match Bale twice picked out Ramsey before his goal with superb defence-splitting passes. Cakır denied him from a tight angle in the sixth minute and then Ramsey thundered a shot over the bar in the 24th.

There was nothing lucky about the third time, though, with Bale floating a superbly-timed cross in the 42nd minute for Ramsey who brought the ball down perfectly to slot under Cakir.

With Turkish and Azeri Presidents Tayyip Erdogan and Ilham Aliyev in the stands, Turkey upped the pace after the break.

Captain Burat Yilmaz, who had missed a good chance in the first half, should have scored 10 minutes after the restart when he was left completely unmarked in front of the Welsh goal but blazed a volley from three metres out well over the crossbar.

Wales found space to counter attack and Ramsey's low shot was blocked before Bale was brought down just inside the box to earn a spot kick on the hour.

But the 31-year-old's effort flew high and wide to keep the Turks in the game.

"It's unfortunate but what he did show was character afterwards," said Wales manager Rob Page.

"Everybody makes mistakes. Ok, he missed it, but so what? He got man of the match!"

The disappointing Turks did force a good save from keeper Danny Ward when he punched a Merih Demiral header wide in the 87th minute.

But they ran out of steam in stoppage time, allowing Bale to cut inside to feed Roberts for Wales' second goal.

"I would like to apologise," Turkey defender Umut Meras said. "We wanted to win so hard tonight but that was not enough. We still have one more game to play and we will try our best to win against Switzerland."

© Copyright 2021 Reuters Limited. All rights reserved. Republication or redistribution of Reuters content, including by framing or similar means, is expressly prohibited without the prior written consent of Reuters. Reuters shall not be liable for any errors or delays in the content, or for any actions taken in reliance thereon.
Related News: Russia, Finland, Artem Dzyuba, Aleksei Miranchuk, Teemu Pukki
SHARE THIS STORYCOMMENT
Print this article 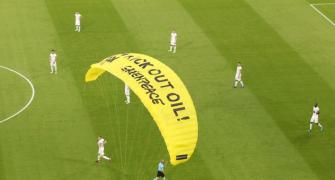