Could a runaway celebrity cow replace the late Paul the 'oracle' octopus as the next animal with the ability to foretell the fortunes of Germany's national soccer team?

German football fans were delighted that Yvonne the cow's decision to tip Portugal to beat Germany at the Euro 2012 soccer championship in the Ukrainian city of Lviv on Saturday turned out to be wrong. 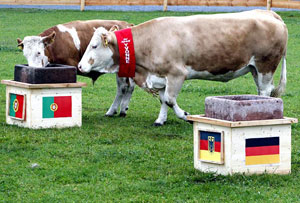 Yvonne shot to fame in Germany last year after she escaped from a farm where she was due to be slaughtered and roamed free around Bavaria for three months, eluding the farmer, hunters, animal activists, Ernst the bull and even her best friend.

Paul, the mystical mollusc correctly predicted the outcome of all matches involving the German team in the 2010 World Cup, including defeat to Spain in the semi-finals by choosing to eat from one of two containers placed before him. One container carried the German flag and the other the flag of the opposing national side.

The bolting bovine was offered a choice of troughs decked out with national flags on Friday and ate from the Portuguese one, Germany's radio Bayern 3 reported. However, she also swiftly moved on to the German trough.

Since Paul's death in 2010 at the age of almost three, a ripe old age in octopus terms, Germany has been scouring the animal kingdom for a worthy successor.

© Copyright 2020 Reuters Limited. All rights reserved. Republication or redistribution of Reuters content, including by framing or similar means, is expressly prohibited without the prior written consent of Reuters. Reuters shall not be liable for any errors or delays in the content, or for any actions taken in reliance thereon.
Related News: Germany, Paul, Bayern, Portugal, Spain
SHARE THIS STORYCOMMENT
Print this article 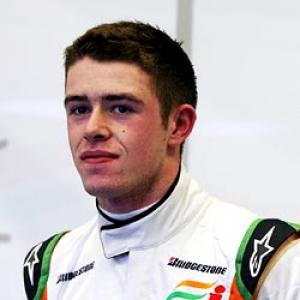 No points for Force India at Canadian GP