Liverpool registered a remarkable 23rd win from 24 games this season and stretch their unbeaten league run to 40. 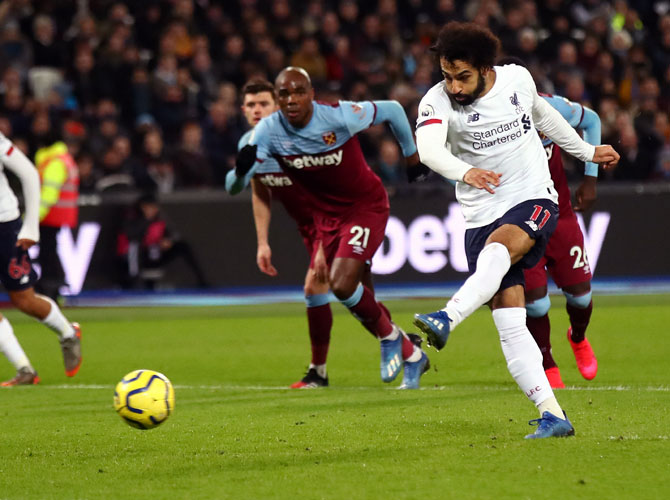 Liverpool continued their relentless march to a first English title in 30 years, easing to a 2-0 victory at West Ham United on Wednesday to move 19 points clear at the Premier League summit.

Mohamed Salah fired them ahead from the penalty spot in the first half and Alex Oxlade-Chamberlain doubled their advantage early in the second to wrap up a remarkable 23rd win from 24 games this season and stretch their unbeaten league run to 40.

In a fixture postponed from December, when Liverpool were busy winning the Club World Cup, they never looked under much pressure and picked West Ham off at crucial moments, defending manfully when needed and looking a constant menace on the break.

Salah stroked home from the spot in the 35th minute after Divock Origi was chopped down from behind and Oxlade-Chamberlain finished off a lethal counter attack of the sort that has come to characterise Liverpool’s season in the 52nd.

“These boys have played outstanding football throughout the season. Tonight was a normal performance,” he said.

His West Ham counterpart David Moyes was more effusive in his praise of Klopp’s side.

“They are as good as there has been around at this moment in time, and it is very difficult for me as a former manager of Everton and Manchester United to say that,” Moyes said. 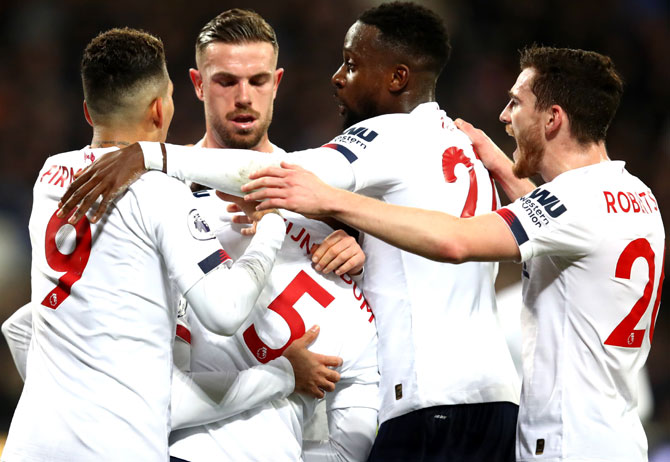 West Ham had glimpses of goal, with Manuel Lanzini fluffing an excellent opportunity at the start of the second half and Robert Snodgrass drawing a fine stop from Liverpool keeper Alisson, but their plight looks increasingly bleak.

While Liverpool have amassed a whopping 70 points, Moyes’s side sit 17th with 23, outside the relegation zone only on goal difference.

Without Sadio Mane, missing due to a muscle injury, the visitors seemed to have lost some attacking spark in the early stages.

Still, Liverpool could have gone ahead in the 24th minute when Andy Robertson lifted a chance over Lukasz Fabianski before Issa Diop got back to clear. Robertson’s fizzing cross narrowly avoided Origi’s outstretched boot.

The Belgian striker won Liverpool’s penalty when he was sent tumbling by Diop’s challenge from behind, which was followed by the seemingly obligatory VAR check before Salah was allowed to take the kick.

The Egyptian sent Fabianski diving the wrong way, firing low into the net for his 12th league goal of the campaign. 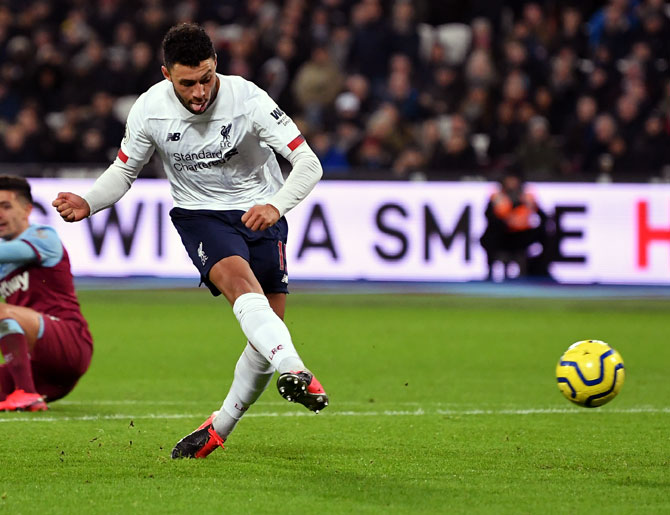 IMAGE: Alex Oxlade-Chamberlain finished off a lethal counter attack of the sort that has come to characterise Liverpool’s season in the 52nd minute to double their lead. Photograph: Justin Setterfield/Getty Images

Both teams had chances in a frenetic start to the second half with Lanzini scuffing a good opportunity that was easily saved while Roberto Firmino squirmed free to draw a better stop from Fabianski at the other end.

Yet a feature of Klopp’s side is their ability to strike with lethal force on the break.

A West Ham corner was cleared before Jordan Henderson found Salah. His superb pass picked out Oxlade-Chamberlain who finished with precision to give Liverpool a healthy cushion.

West Ham had chances, with Alisson producing an excellent save to deny Snodgrass and Trent Alexander-Arnold striking the ball forcefully against his own post with an attempted clearance.

The game, however, belonged to Liverpool with Salah hitting the woodwork before the visitors cruised through to fulltime.

© Copyright 2020 Reuters Limited. All rights reserved. Republication or redistribution of Reuters content, including by framing or similar means, is expressly prohibited without the prior written consent of Reuters. Reuters shall not be liable for any errors or delays in the content, or for any actions taken in reliance thereon.
Related News: Unstoppable Liverpool, Mohamed Salah, Juergen Klopp, Lukasz Fabianski, David Moyes
SHARE THIS STORYCOMMENT
Print this article 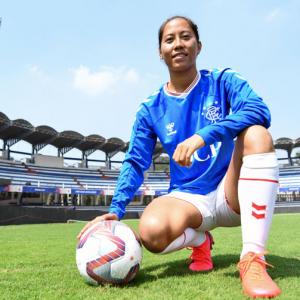 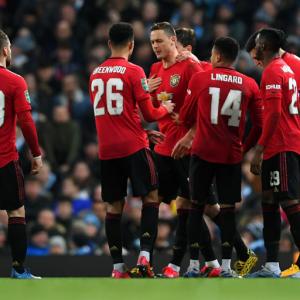 PIX: City lose to United but hang on to reach final