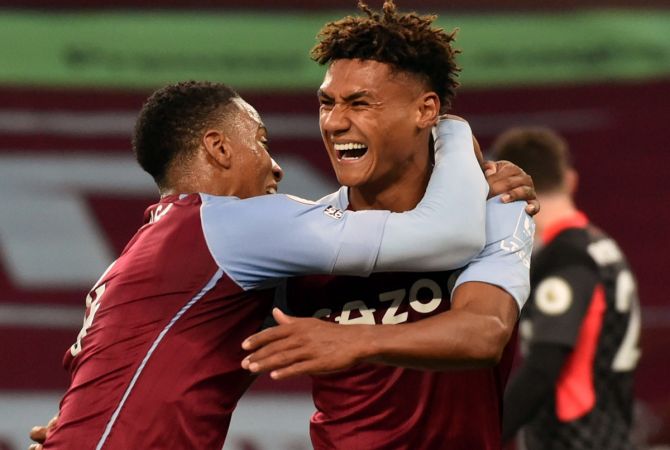 Champions Liverpool were ripped apart 7-2 at Aston Villa and Manchester United were humiliated 6-1 at home by Tottenham Hotspur on Sunday in one of the most astonishing days of Premier League results.

Adding to the upsets, Leicester City, who had a 100 percent record from the opening three games, were beaten 3-0 at home by West Ham United.

While Spurs' win at Old Trafford against a United side reduced to 10 men in the first half was the joint worst defeat in the Premier League era for Ole Gunnar Solskjaer's team, even that remarkable result was overshadowed by the scale of Liverpool's defeat.

"All the things you should not do in football we did tonight," said Liverpool manager Juergen Klopp, who added his team had "lost the plot". 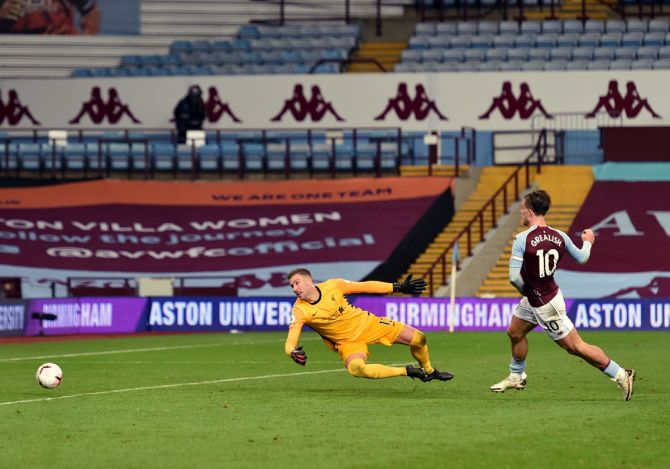 A stunning first-half hat-trick from Ollie Watkins helped end the champions' winning start to the season in extraordinary fashion.

Liverpool started badly at Villa Park as a poor pass from goalkeeper Adrian -- deputising for the visitors for Alisson after the Brazilian picked up a shoulder injury -- gifted Watkins the opener in the fourth minute.

While there was good fortune about Watkins' first goal in a Villa shirt, his second was pure quality as he cut inside before firing into the top corner to make it 2-0 in the 22nd minute.

Mohamed Salah's excellent finish looked to have got Liverpool back in the game in the 33rd, but John McGinn's deflected effort two minutes later restored Villa's two-goal advantage. 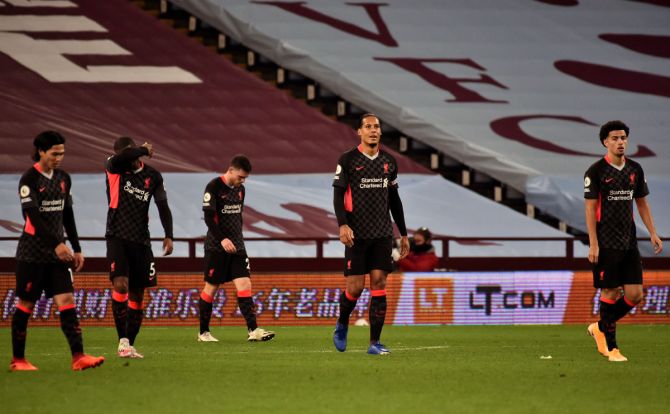 IMAGE: Liverpool are the first defending champions to concede seven goals in a league game in 67 years since Arsenal were beaten by 7-1 by Sunderland in 1953. Photograph: Peter Powell - Pool/Getty Images

Watkins completed his hat-trick inside 39 minutes, with former Everton midfielder Ross Barkley -- on his debut after joining Villa on loan -- making it five, 10 minutes into the second half.

Salah did give Liverpool hope on the hour mark, before a late double from Jack Grealish completed an utterly unexpected victory for a team who only escaped relegation on the final day of last season.

Spurs were rampant as Jose Mourinho inflicted a crushing defeat on his former club, which will intensify the pressure on Solskjaer and United CEO Ed Woodward. Son Heung-min and Harry Kane each scored twice for Spurs while United's Anthony Martial was sent off in the 28th minute.

"It is history for Tottenham, history for my boys and I cannot deny it is also history for me," said a delighted Mourinho, whose side were playing their fourth game in eight days.

United had taken a second-minute lead through a Bruno Fernandes penalty but Spurs responded quickly, taking advantage of some awful United defending as Tanguy Ndombele and Son put them 2-1 ahead. 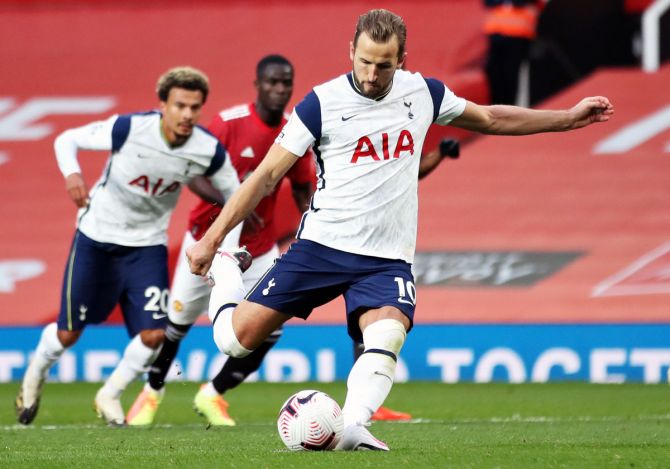 United went down to 10 men after Martial was sent off following a clash with Erik Lamela at a corner and then Harry Kane made it 3-1.

Son added his second shortly before the break as United fell to pieces with Harry Maguire and Eric Bailly utterly ineffective in the centre of defence.

A Serge Aurier goal and a Harry Kane penalty in the second half completed a memorable victory for Spurs, which matched United's 6-1 loss to Manchester City in October, 2011.

Leicester were on a high after their stunning 5-2 win at Manchester City a week ago, but were brought crashing down to earth by an impressive West Ham.

Michail Antonio headed West Ham into a 14th-minute lead and Pablo Fornals made it 2-0 with a close-range strike 20 minutes later. 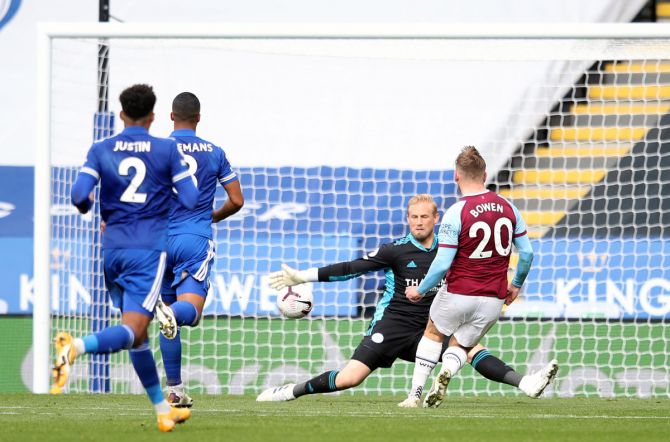 Declan Rice hit the underside of the bar for West Ham after a darting solo run from inside his own half before Jarrod Bowen made sure of the win seven minutes from the end after a wonderful pass from Fornals.

Arsenal scored two goals in four minutes to inflict a fourth straight loss on struggling Sheffield United, with Bukayo Saka and Nicolas Pepe on target in the second half.

Saka put the Gunners ahead with a 61st-minute header before substitute Pepe added a second three minutes later.

Irish striker David McGoldrick gave his side hope with a brilliant curling effort in the 84th minute, but Arsenal held firm to continue their progress under Mikel Arteta.

Southampton beat an insipid West Bromwich Albion 2-0 with goals either side of halftime from Moussa Djenepo and Oriol Romeu at St Mary's Stadium.

Pedro Neto's goal early in the second half earned Wolverhampton Wanderers a 1-0 victory over Fulham at Molineux, leaving the visitors rooted to the bottom of the standings after their fourth successive league defeat.

© Copyright 2021 Reuters Limited. All rights reserved. Republication or redistribution of Reuters content, including by framing or similar means, is expressly prohibited without the prior written consent of Reuters. Reuters shall not be liable for any errors or delays in the content, or for any actions taken in reliance thereon.
Related News: Harry Kane, Manchester United, Tottenham Hotspur, Liverpool, IMAGE
COMMENT
Print this article 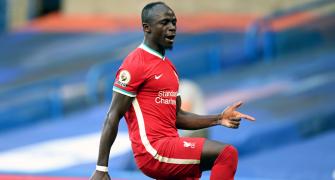 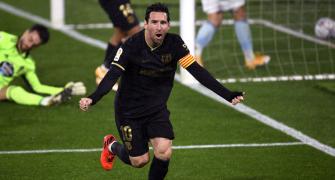 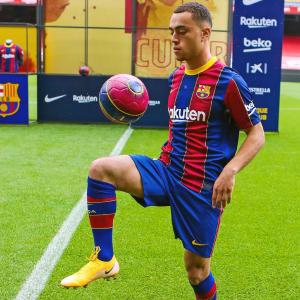 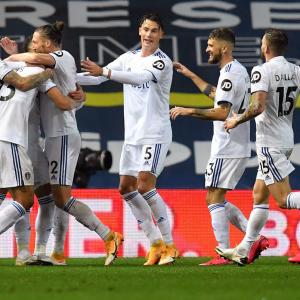