Manchester City's Mario Balotelli escaped unhurt from a car accident in Manchester on Thursday with the striker having received the backing of his manager Roberto Mancini.

"Mario has had an accident but he's fine," said a spokesman for the Premier League club. "There were no injuries sustained by anyone and it wasn't his fault". 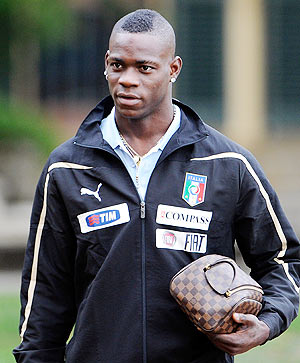 He added that the 21-year-old would be fit to play in their clash at Arsenal on Sunday but did not know if Mancini had spoken to his fellow Italian following the incident.

A statement from Greater Manchester Police read: "Shortly after 3.15pm on Thursday 5 April 2012, police were called to Medlock Street, Manchester city centre to reports of a collision between two cars.

"The passenger of one of the cars was taken to hospital for precautionary measures. Inquiries are ongoing."

The car accident is Balotelli's second in less than two years and is the latest in a series of unfortunate incidents involving the Italian, who famously wore a T-shirt saying 'Why Always Me?' in October's 6-1 win at Manchester United.

He has been involved in a series of controversial incidents on and off the pitch including watching his city-centre flat catch fire after fireworks were let off in his bathroom.

Balotelli clashed with team-mate Aleksandar Kolarov over a free kick in the home game with Sunderland on March 31 in which he scored twice in a 3-3 draw and British media reported that he was involved in a training ground bust up with Yaya Toure.

However, Mancini on Thursday called rumours of dressing room tension between Balotelli and other players "totally false" and went to great lengths to support his under-fire striker.

Mancini refused to concede the title to rivals Manchester United, who lead the table by five points, although he said a defeat by third-placed Arsenal would all but end their chances.

© Copyright 2022 Reuters Limited. All rights reserved. Republication or redistribution of Reuters content, including by framing or similar means, is expressly prohibited without the prior written consent of Reuters. Reuters shall not be liable for any errors or delays in the content, or for any actions taken in reliance thereon.
Related News: Mario Balotelli, Roberto Mancini, Manchester, Arsenal, Yaya Toure
COMMENT
Print this article