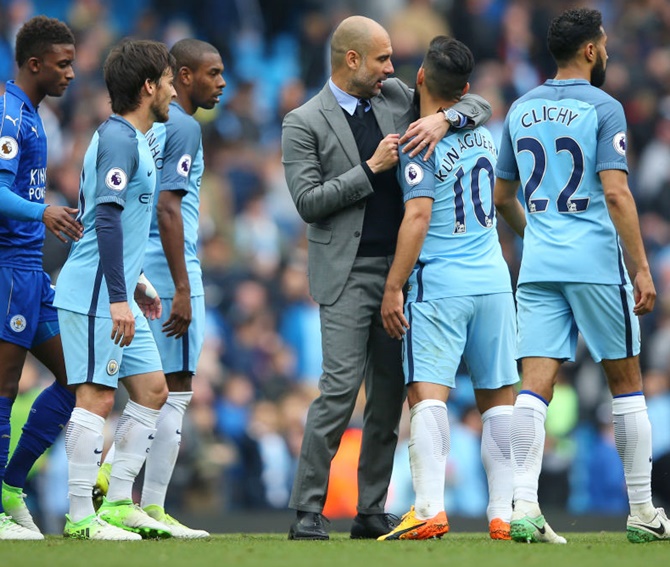 Manchester City survived a stirring Leicester City fightback to claim a 2-1 win that lifted them above Liverpool into third in the Premier League on Saturday.

The hosts, looking to cement their top-four status, were cruising when goals by David Silva and Gabriel Jesus put them 2-0 ahead after 36 minutes but Leicester hit back strongly.

Shinji Okazaki smashed in a sensational volley before halftime and the hosts had a huge let-off in the 77th minute when Riyad Mahrez's penalty was ruled out because he inadvertently made a double contact while striking the ball.

Jamie Vardy also missed a late chance but a nervy City hung on to move to 72 points with two games remaining. Arsenal maintained their pursuit of a top-four finish with an impressive 4-1 victory at Stoke City but the Gunners still need other favourable results if they want to play in the Champions League for a 21st consecutive season.

Restored to the starting line up, Olivier Giroud opened the scoring from close range after 42 minutes and Mesut Ozil doubled the advantage after the break. He collected Alexis Sanchez's defence-splitting pass before beautifully chipping Jack Butland.

Peter Crouch set up a potentially nervous finish with a 66th-minute goal -- though replays appeared to show the ball going in off the forward's hand -- but Sanchez and Giroud, with his second, sealed an impressive victory with scores in the 76th and 80th minutes.

With two matches remaining, Arsenal, winners of five of their past six games, have 69 points -- one fewer than Liverpool in fourth. Stoke, who have won just one of their previous 10 league games, sit in 13th with 41 points.