Images from the English Premier League matches played on Monday 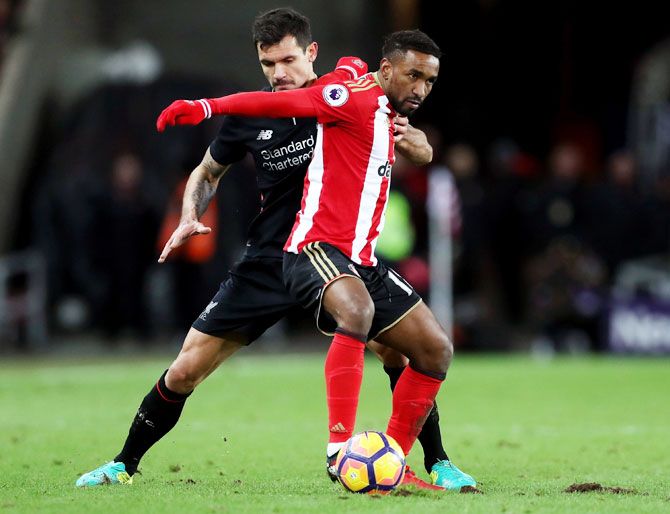 Sadio Mane was hero and then villain as he gifted a penalty to help Sunderland hold Liverpool to a 2-2 draw in a rip-roaring Premier League clash on Monday at the Stadium of Light on Monday.

Jermain Defoe kept up Sunderland's fight to avoid relegation as he converted two penalties to give the Black Cats a home draw with Liverpool after the visitors led twice.

Defoe took his league tally to 11 goals, cancelling out a 19th minute opener by Daniel Sturridge and then a 72nd minute Sadio Mane tap-in, with both Liverpool goals coming after poor Sunderland defending at corner kicks.

owever, Liverpool returned the favour with a clumsy Ragnar Klavan challenge on Didier Ndong for Defoe's first spot kick and then with a dreadful Mane error for the second when a free kick hit the Senegal winger's outstretched arm.

The result left second-placed Liverpool five points behind leaders Chelsea, who visit London rivals Tottenham Hotspur on Wednesday, while Sunderland stay in the relegation zone although the draw took some of the pressure off manager David Moyes. 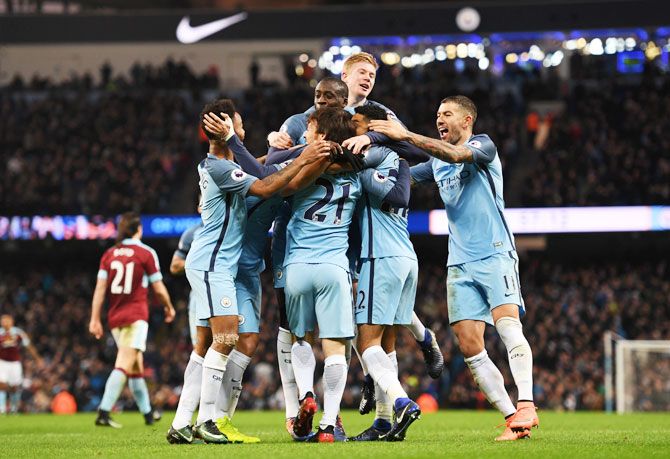 Sergio Aguero came off the bench to score as ManchesterCity made light of playing for an hour with 10 men to beat Burnley 2-1 at the Etihad Stadium on Monday.

City, needing a quick response after defeat at title rivals Liverpool on Saturday, suffered a blow when Fernandinho was red-carded just past the half hour mark for a wild-looking tackle on Burnley's Iceland midfielder Johann Berg Gudmundsson.

The hosts dominated after the break, however, and took the lead after 58 minutes when Gael Clichy's low shot crept past Burnley keeper Tom Heaton and into the far corner.

Aguero, introduced as a second-half substitute, doubled City's lead with a fine finish from a tight angle four minutes later but Ben Mee halved the deficit to set up a tense finale.

City moved above Tottenham Hotspur and Arsenal into third spot in the Premier League with 42 points, seven behind leaders Chelsea who play away at Spurs on Wednesday.

West Bromwich Albion hit back from a goal down to beat Hull City 3-1 on Monday as second-half goals by Chris Brunt, Gareth McAuley and James Morrison piled on the misery for Mike Phelan's struggling side.

Robert Snodgrass gave Hull the lead at the Hawthorns in the 21st minute, sliding in to volley Ahmed El Mohamady's cross into the net and the Tigers were good value for their lead at the break.

But West Brom started the second half strongly and equalised four minutes in after sustained pressure yielded a corner which Brunt dispatched into the net with a powerful header.

McCauley struck in the 62nd minute, the referee ruling that his header had crossed the line before being cleared as Hull failed to deal with another set piece, and Morrison scuffed a left-footed shot home 11 minutes later.

Hull remained mired in the bottom three on 13 points while West Brom are eighth on 29 ahead of their trip to Tottenham Hotspur.

Substitute Enner Valencia scored his first Everton goal to break Southampton's resolve and send the home side on their way to a 3-0 win at GoodisonPark on Monday, with Leighton Baines and Romelu Lukaku also finding the net.

Valencia had not scored in the Premier League since getting two goals for West Ham United against ManchesterCity last January, but secured the breakthrough in the 73rd minute when he bundled home the rebound after Fraser Forster had saved Lukaku's header.

Ronald Koeman's side had struggled to find solutions to prise open his former employers but killed off the contest in the 81st minute when Baines beat Forster from the spot after Maya Yoshida clumsily brought down Lukaku.

Everton ran riot as Southampton crumbled and Lukaku signed off a dominant second half when he slammed an emphatic effort into the top corner from just inside the visitors' box in the 89th minute.

The win keeps Everton in seventh on 30 points, six behind Manchester United who play later on Monday, while Southampton remain on 24 points.

Leicester held by Middlesbrough in stalemate 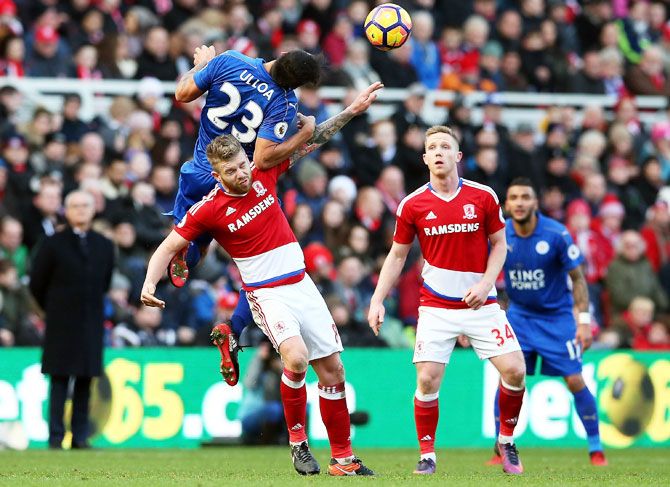 IMAGE: Middlesbrough's Adam Clayton is challenged by an air-borne Leonardo Ulloa of Leicester City during their Premier League match at Riverside Stadium in Middlesbrough on Monday. Photograph: Nigel Roddis/Getty Images

Troubled champions Leicester City were held to a turgid 0-0 draw at Middlesbrough on Monday to edge further clear of the Premier League relegation zone.

Leonardo Ulloa missed the visitors' best chance when he headed a Christian Fuchs corner straight at Brad Guzan in the 69th minute, although the Foxes were largely toothless without strikers Islam Slimani and Jamie Vardy, who was serving the final match of his three-game suspension.

Middlesbrough, now 16th on 19 points, threatened through Adama Traore, the game's outstanding individual, but he struggled to find an end product to accompany his scintillating work out wide. Boro's Gaston Ramirez fired an 83rd-minute effort into the side netting.

Leicester kept consecutive clean sheets for the first time since April but the champions, who moved seven points clear of the drop zone ahead of the matches later on Monday, are still awaiting their first away win of the season.

"It's a good result for us," Boro coach Aitor Karanka told reporters.

"I'm really pleased with the performance.

"We showed that we are better than them and we can't forget they are a Champions League side and the Premier League champions. We have to continue to be organised and not concede goals."

© Copyright 2021 Reuters Limited. All rights reserved. Republication or redistribution of Reuters content, including by framing or similar means, is expressly prohibited without the prior written consent of Reuters. Reuters shall not be liable for any errors or delays in the content, or for any actions taken in reliance thereon.
Related News: Leicester, Middlesbrough, Boro, Leonardo Ulloa, Adama Traore
COMMENT
Print this article