England striker Danny Welbeck made the most of a rare start for Manchester United with a first-half double in a 3-0 win at Aston Villa on Sunday as the champions ended a run of four Premier League games without victory. 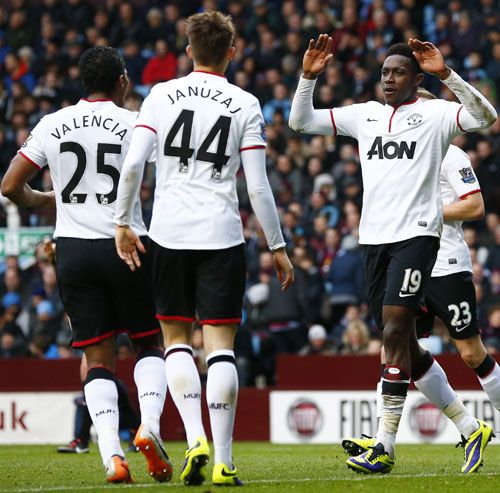 Welbeck, recalled in place of injured Robin van Persie, struck twice in three minutes for United who moved up one spot to eighth, 10 points behind leaders Arsenal.

United, who had suffered successive home defeats by Everton and Newcastle United that followed away draws with Cardiff City and Tottenham Hotspur, controlled the game and had the points wrapped up after Tom Cleverley's first goal of the season on 52 minutes.

Nathan Dyer scored for Swansea City but suffered a suspected fractured right angle in the 1-1 draw at Norwich City.

Tottenham host Liverpool in a later kickoff (1600). A victory for the visitors would lift them back up to second spot.

West Bromwich Albion moved swiftly to sack manager Steve Clarke on Saturday following the Midlands club's latest defeat away to Cardiff City after a dreadful run in the Premier league.

"West Bromwich Albion have this evening relieved head coach Steve Clarke of his duties and placed him on gardening leave with immediate effect," the club said in a statement.

West Brom, who sit two points above the relegation zone, have won only once in their last 10 league matches since beating Manchester United at Old Trafford in late September.

They surprised many by finishing eighth last term in Clarke's first season in charge, but have won only seven of 34 league matches in 2013 and picked up 31 points in total.

© Copyright 2021 Reuters Limited. All rights reserved. Republication or redistribution of Reuters content, including by framing or similar means, is expressly prohibited without the prior written consent of Reuters. Reuters shall not be liable for any errors or delays in the content, or for any actions taken in reliance thereon.
Related News: Manchester United, Steve Clarke, West Brom, Danny Welbeck, Bromwich Albion
COMMENT
Print this article