In the film, "I will not lose", showing at this year's Berlin film festival, Beyer who won gold at the 1976 Montreal Olympics and was athletics team captain says, "I knew about everything that was happening to me. I decided for myself."

East Germany won 40 gold medals at the Montreal Olympics, putting it second in the medals table behind the Soviet Union. The much larger West Germany won only 10.

Two years earlier, Manfred Ewald, leader of East Germany's sports federation, launched a top-secret centralised doping programme. It was a time, at the height of the Cold War, when every socialist gold medal was an ideological victory over the west. 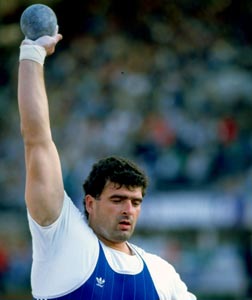 Experts believe that during the 1970s and 1980s up to 10,000 sportsmen and women were doped, the overwhelming majority without their knowledge.

Results came swiftly. East Germany, a country of some 17 million, almost doubled its gold medal tally from one Olympics to the next.

The film was directed by Sandra Kaudelka, herself a diver who became unwillingly entangled in the state's competitive sports machine - which identified promising youngsters, and put them through punishing training schemes and also dished out the infamous "little blue pills" which contained anabolic steroids.

In the film, according to its media officer, Beyer, 57, tells Kaudelka, "I rejected some things, others I did. I knew. I decided. Nothing was slipped secretly into the tea."

Asked by Kaudelka if he felt his victory was unjustified he says: "No, absolutely not. I am a rightful winner because I was the best in the competition."

"Doping or other supporting measures only amount to about two or three percent of performance - the rest is hard work," he said.

Beyer, who now runs a travel agency business in Potsdam, was unavailable to comment, due to ill health.

Kaudelka said that in making the film she wanted to portray the wider aspects of East German sport, beyond the doping.

"Reducing everything to the issue of doping belies what I personally went through. On one hand, the competitive sports system in East Germany was even more perfidious and subtle than is usually shown. The ensuing problems went way beyond the much-cited practice of doping," she said in a statement.

"On the other hand, this one-sided perception and pigeonholing the athletes into perpetrator and victim do not do justice to the incredible physical and mental accomplishments of a great number of people."

The German athletics federation views records from before the fall of the Berlin Wall in 1989 as tainted but has failed to have them erased for fear of legal repercussions from the athletes.

Today up to 2,000 former athletes are seriously ill, suffering from tumours, heart defects, infertility, depression, bulimia, and circulation and spinal problems. Some have died, others are waiting to see what health problems their children have inherited.

One of the better-known cases is that of shot putter Heidi Krieger, whose body with its artificially inflated muscles was so alien to her that she changed her sex and name in 1997.

In 2000 Ewald was convicted of causing bodily harm and given a 22-month suspended sentence. The few trainers and doctors who were charged were given moderate fines or suspended sentences. Few ever expressed regret.

© Copyright 2020 Reuters Limited. All rights reserved. Republication or redistribution of Reuters content, including by framing or similar means, is expressly prohibited without the prior written consent of Reuters. Reuters shall not be liable for any errors or delays in the content, or for any actions taken in reliance thereon.
Related News: Sandra Kaudelka, Udo Beyer, East Germany, Manfred Ewald, Heidi Krieger
SHARE THIS STORYCOMMENT
Print this article