The International Olympic Committee (IOC) has appreciated Indian Olympic Association's (IOA) concern for the victims of 1984 Bhopal Tragedy but maintained that Dow Chemicals had no ownership stakes in Union Carbide till 2000.

IOC also said that its relationship with Dow Chemicals is well over 30 years and "we were aware of the Bhopal tragedy when discussing the partnership with Dow".

IOA has repeatedly expressed its opposition to the Dow Chemicals as one of the sponsors for the London Olympics, because of its ownership of the infamous Union Carbide which was responsible for the worst industrial disaster in India.

IOA had urged the IOC and London Organising Committee for the Olympic and Paralympic Games (LOCOG) to withdraw Dow as Games Sponsors.

In a letter to IOA acting President Vijay Kumar Malhotra, IOC chief Jacques Rogge has said that "IOC recognizes that the Bhopal tragedy in 1984 was horrific event for India and the world. The Olympic Movement sympathises with the grief of the victims' families and regrets the ongoing suffering people face in the region."

"The court has upheld this agreement twice since then, in 1991 and 2007. We understand that this is being reviewed yet a third time by the India Supreme Court and we are aware of Dow's position in this mater, and of the sensitivities of all parties."

"We only enter into partnerships with organizations that we believe work in accordance with the values of the Olympic Movement. Dow is a global leader in its field of business and is committed to good corporate citizenship. The company has supported the Olympic Movement for over 30 years, providing support and bringing industry-leading expertise and innovation to the Games," Rogge said.

"We do hope that the Indian Olympic Association is recognizing this, while we appreciate the difficult situation you are facing in your country."

Reacting to the letter, Malhotra said that IOA was not convinced by the IOC's stand.

"We want that IOC should understand and appreciate the feelings and sentiments of the victims and drop Dow as sponsors," he said.

He also wanted the Union government to come out with a clear stand on this issue.

"We have yet to receive any reply from the Government, while IOC has written to us," he said.

Malhotra said while Dow Chemical operates in India with the full knowledge and permission of the Government, it is throwing the ball into the IOA's court when this sponsorship issue is raised.

"Government should come clean on this issue," he added.

Source: PTI© Copyright 2022 PTI. All rights reserved. Republication or redistribution of PTI content, including by framing or similar means, is expressly prohibited without the prior written consent.
COMMENT
Print this article
We are committed to our Olympic partnership: Dow Union Budget to be presented on March 16 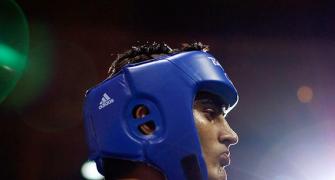 'Unfortunate that some IOA members want Kalmadi back'