Devendro, Jai in pre-quarters, Akhil out of World boxing

The 19-year-old Devendro pummeled Joselito Velazquez of Mexico 40-19 in what is the biggest points win of the ongoing event.

Jai, on the other hand, got the better of Miroslav Serban of the Czech Republic 14-6. 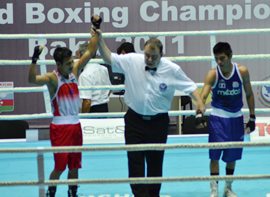 The duo joined Manoj Kumar (64kg), Dinesh Kumar (81kg) and Vikas Krishan in the pre-quarters, as Indian boxers continued to pack a punch at the mega-event from where quarter-finalists (from 49kg to 81kg division) qualify for the London Olympics.

But there was disappointment for India in the heavyweight, 91kg, category as Asian Games silver-medallist Manpreet Singh crashed out after losing 17-9 to Dzhakon Qurbanov in his second round bout.

The Indian, who got an opening round bye, trailed 3-5 in the first round. Qurbanov widened the gap to 7-12 at the
end of the second round.

Devendro opened the proceedings for India and the diminutive Manipuri, participating in his maiden senior international event, was off to a flier.

Opening up a massive 19-7 lead in the opening round, Devendro was up 31-14 by the end of the second.

The Indian slowed down a bit in the final three minutes, notching up nine points to total 40 against his opponent's 19 in the final analysis.

"It was a sensational performance. He used a combination of right straights and left hooks besides the occasional uppercuts. His punches landed so perfectly that it was just amazing to watch," national coach Gurbax Singh Sandhu said from Baku.

"We actually told him to slow down a bit in the final round. His aggression had to be seen to be believed. I expected him to do well and today he was just unstoppable. The other guy ended up getting the mandatory knock-down eight count twice in the bout," he added.

Jai was the next man in for India and he was also in the lead from the start.

Leading 3-1 in the opening three minutes, he went on offensive in the next round to make it 9-3. The Commonwealth Championships gold-medallist continued his domination over the Serbian in the final three minutes to clinch the issue easily.

Later, there was more disappointment in store when, Akhil Kumar (56kg) crashed out following his second-round loss to fourth seed Nevin John of Ireland. Akhil, a former Commonwealth Games gold-medallist, lost 14-21 to John.

The Haryana-boxer trailed 5-7 in the opening round and the gap widened to 9-14 at the end of the second round. In the end, the 22-year-old Nevin proved too good for the 30-year-old Indian as he sealed the issue in his favour to progress to the next stage.

Akhil ended up with a cut below his right eye just at the beginning of the second round due to one of John's nasty straight hit, which affected his vision.

"I was trailing by just two points and I thought I could cover up but the cut I received below my eye led to a lot of bleeding and also affected my vision. From that point on, I became very defensive and ended up losing the bout," said Akhil. 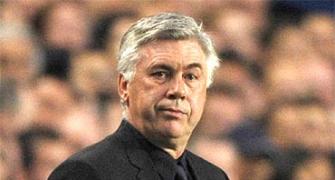 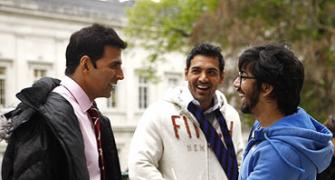 'I've been critical about my father David Dhawan's work' 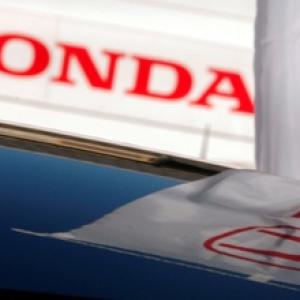