India experienced mixed fortunes on the second day of the third  International 'Republic of Kazakhstan President's Cup' in Almaty, on Thursday.

Asian Games silver medallist Manpreet Singh (91kg) and L Devendro Singh (49kg) advanced to the semi-finals of the tournament with resounding victories, but Youth Olympics silver medallist Shiva Thapa (56kg) and Commonwealth Games gold medallist Manoj Kumar (64kg) suffered defeats in the quarter-finals, though not before giving their opponents a run for their money.

In the light-fly division, Devendro breezed past Russia's Egorov Vasily. The recently turned 20-year-old dominated with his electric offence and agile footwork. Vasily had no answer to Devendro's superior power play.

In the last round, the Manipuri boxer continued to attack with his three-punch combination and added six more points to his tally, finally winning the bout on points, 22:9. 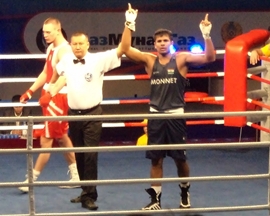 Devendro has a tough task in the Saturday's semi-finals as he takes on the experience of Olympian and Asian Games silver medallist Birzhan Zakipov of Kzakhstan.

Manpreet also secured his spot in the round of four with another power-packed performance. He defeated Telesenko Alaxander of Ukraine in a completely one-sided contest.

The 23-year-old heavyweight was at his menacing best as he overwhelmed the Ukrainian boxer with hard-hitting jabs and body blows. The reigning National champion eventually won 17:7 on points.

In the semis he will take on Abduganiev Arbek, also of Kazakhstan.

Having made it to the semi-finals, both Manpreet and Devendro are assured of at least a bronze medal finish from the tournament.

In the quarter-finals of the bantamweight division, Thapa again gave a fine account of his skills and maturity. Up against AIBA World Boxing Championships gold medallist Alvarez Estrada of Cuba, the 18-year-old was not for once fazed by his more experienced opponent.

Not much separated the two boxers throughout the bout, as Shiva matched the reigning World champion punch for punch.

After the opening round the scores were knotted at 3-all, the Cuban tired to up the ante, but Shiva put up a solid defence and kept coming back with counter attacks. Estrada, though, grabbed a crucial one-point lead by the end of the second.

Thapa, however, leveled things in the final round. After nine minutes of high octane fighting the scores were even at 16-all.  Unfortunately for India, Thapa lost on the count back (48:49).

It was a brilliant show by the teenage boxer from Assam, who has displayed great understanding of the game and is bright prospect.

Manoj too put up a brave performance, but in the end was defeated at the hands of Ulihanov Azhat of Almaty (KAZ).

The 25-year-old, who led by two points after the first round, lost the advantage to some spirited boxing by the Ukrainian in the second. The Indian made a comeback in the third with some hard-hitting blows, but it was not enough to take game away from Ulihanov. Manoj lost on points 14:18 in the end.

Day three of the tournament will witness three Indian boxers take ring. World Championships bronze medallist Vikas Krishan (69kg) will meet Kojabekov Bakhitjan of the Kazakhstan 2 team in the quarter-finals, Lakhbeer Singh (69kg) is up against Sapiev Serik of Kazakhstan, and Kanwar Preet Singh (+91kg) will lock horns with Demmene Nadir of Algeria.