Jason Day put himself in prime position once again to end Australia's Masters jinx when he fired a four-under-par 68 to seize the lead at the halfway mark of the year's first major championship on Friday.

Day curled in a 13-foot birdie putt at the par-three 16th hole to break a three-way tie and finish at six-under-par 138 on a difficult day of swirling winds and tricky pin placements at Augusta National. 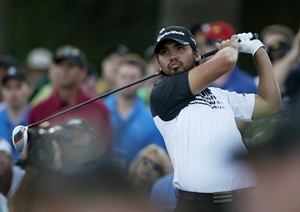 The 25-year-old Day, a runner-up in the Masters and US Open in 2011, wielded a hot putter to notch 10 one-putts in his quest to become the first Australian to claim a green jacket.

"Obviously there's a lot of pressure on my shoulders, being from Australia and no Australian has ever won the event," said Day, who withdrew from last year's Masters because of an ankle injury.

Day's right-to-left putt at 16 snapped a three-way tie at five-under with compatriot Marc Leishman and 1992 champion Fred Couples atop an impressive leaderboard.

The smooth-swinging Couples, 53, birdied the last for 71, while Leishman, the overnight co-leader after an opening 66, shot 73 to join him on 139.

Tiger Woods was part of a four-way logjam at five-under when he suffered a cruel bit of bad luck as his third shot into the par-five 15th struck the stick on the fly and rebounded back into the pond fronting the green.

Woods, who up until that point was the only player of 93 in the field without a bogey in his round, hit his fifth shot within three feet to save bogey.

A three-putt at the 18th gave World No. 1 Woods another bogey for a 71 that dropped him to three-under 141, three shots off the pace.

The 14-time major winner, looking for his first major triumph in five years and first Masters win since 2005, was not dismayed.

"My ball striking was so good today," a confident Woods said. "Even my misses were on top of flags."

Angel Cabrera of Argentina, the 2009 Masters champion, made a sizzling finish to join a three-way tie on four under par with Jim Furyk (71) and Brandt Snedeker (70). Cabrera birdied four in a row and five of the last six holes for his 69. 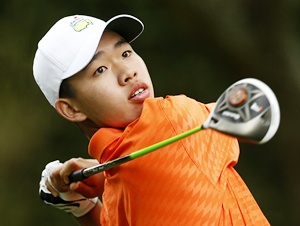 Day nearly extended his lead by a stroke to seven under par when he gave himself a birdie chance at the 17th hole, but the Australian slid his putt just by the edge of the cup.

A damp and dreary start to Friday's play gave way to sunshine and roars with eagles and birdies flying, before swirling winds thoroughly tested the golfers.

Day was stymied by the wind at the par-three 12th where a sudden change in direction contributed to his hitting the ball on the bank short of the green, where it trickled down into Rae's Creek on his way to a bogey-four.

The Australian recovered with a birdie at the par-five 13th.

Sergio Garcia of Spain teed off with a share of the lead after his 66, but soared to a 76 to finish on two-under 142.

Day's missed birdie chance at 17 saved the day for China's 14-year-old Guan Tianlang, who posted a 75 that included a penalty stroke for slow play that put him at four-over 148.

Guan squeezed into weekend play by being within 10 shots of the lead.

Also advancing to the last two rounds was 2012 winner Bubba Watson who shot 73 for his 148 total.

Sixty-one players made the cut.

© Copyright 2022 Reuters Limited. All rights reserved. Republication or redistribution of Reuters content, including by framing or similar means, is expressly prohibited without the prior written consent of Reuters. Reuters shall not be liable for any errors or delays in the content, or for any actions taken in reliance thereon.
Related News: Tiger Woods, Guan Tianlang, Dustin Johnson, Marc Leishman, Angel Cabrera
COMMENT
Print this article 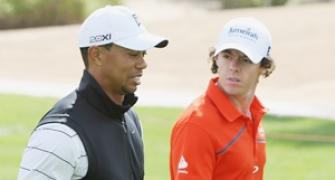 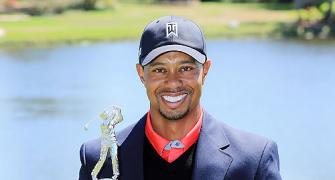 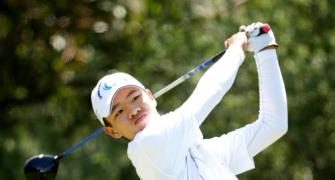 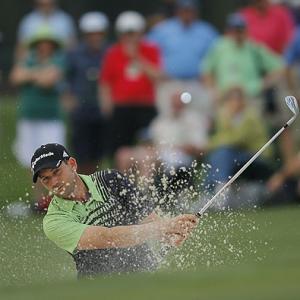