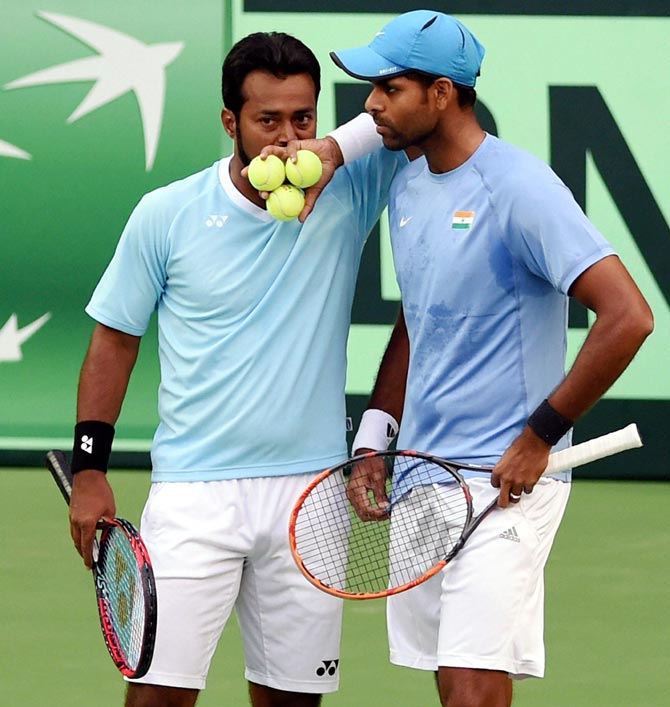 Leander Paes' hopes of creating a world record in Davis Cup were dashed when the veteran Indian and Vishnu Vardhan lost the third rubber to strong rivals Artem Sitak and Michael Venus, who kept the New Zealand alive in the Asia-Oceania Group I Davis Cup tie, in Pune, on Saturday.

The defeat for Paes and his partner meant that the 43-year-old Indian stalwart could not overtake Italian Nicola Pietrangeli for most wins in doubles in Davis Cup history. The two players are tied on 42 wins.

India, who are 2-1 ahead in the tie, will now need to win one of the two reverse singles on Sunday to clinch a place in the second round.

India had taken a 2-0 lead on day one with Yuki Bhambri and Ramkumar Ramanathan winning the first two singles.

Ramkumar will take on Finn Tearney before Yuki takes on Jose Statham in the final rubber of the tie, on Sunday.

Paes and Vardhan started in style and raised the 4000-strong capacity crowd’s hopes at the Shiv Chatrapati Sports Complex by clinching the opening set in 28 minutes after they broke Venus in the sixth game.

But the Kiwi pair fought back superbly by winning the second set in 32 minutes by breaking Paes’ service once and then clinched the third set, in which the Indians squandered two break point chances.

With the momentum having shifted to the visitors, it was no surprise when they got an early service break, in the second game of the fourth set when Vardhan dropped his serve, before closing out the set and the match.

In the first set Vardhan served a couple of aces in succession to dig his way out of trouble and Paes followed suit with a fine return of serve before clinching the point with a cross court winner to break their opponent's serve at 15 that put the hosts 4-2 ahead. 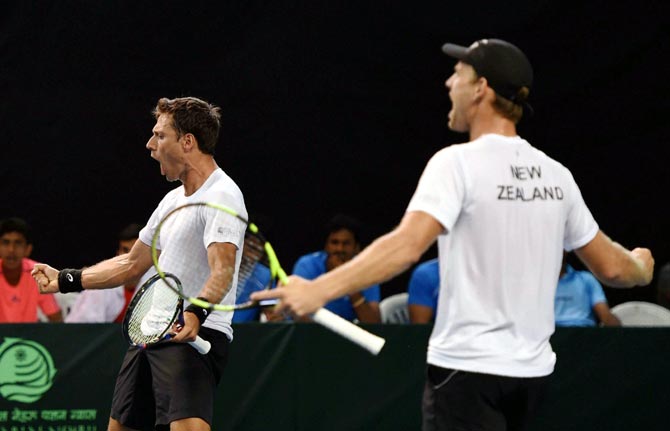 The Indian veteran, ranked 64th in doubles, then held serve at 15 and although Sitak was faced with a must-win situation to hold serve and stay in the set he managed it well by holding at love.

The lowly ranked Vardhan, given timely tips by Paes, did not let go of the advantage and went up to 40-0, the Kiwis fought their way back to 40-30 but had no chance when the 29-year-old Indian served a timely fourth ace to close out the set.

The Kiwis, both ranked higher than the Indian duo in doubles, hit back by clinching the second set in 31 minutes, one break of serve off Paes’s delivery in the fourth game that gave them a 3-1 lead doing the trick.

Paes muffed an easy backhand volley to give the Kiwis two break points and then volleyed wide after following his serve to the net to drop the game.

Earlier, the Indian duo frittered away two break points off Venus’ serve who later held it with an ace.

Sitak, ranked 56th in the world in doubles showed why he has risen up the rankings with some excellent interceptions at the net and fine returns of serve.

The games went with serve with Paes holding it at love before Venus held his at 15 to help the pair clinch the second set 6-3 in 32 minutes and draw parity in the rubber. This was the first set the hosts dropped in the tie, having won both the opening day’s singles in straight sets.

There were no service breaks in the third set that lasted 55 minutes although the Indians had two break-points in their favour in game four after deuce was called twice but failed to capitalize on those. The set went to tie-break, the first one in two days’ play.

After trading mini-breaks it was New Zealand who struck the decisive blow when Paes volleyed long after following his serve to the net at 6-all and then Sitak clinched the set with a backhand drive volley into the tramlines on the first set-point for the Kiwis to help the visitors take a 2-1 lead in the rubber.

In the fourth set, the Kiwis broke the service of Vardhan in the second game after one deuce call when a reflex half-volley from Sitak bisected the two Indians and landed inside the baseline.

The Indian duo saved a match-point in the eighth game on Paes’s serve after the third deuce call but could not prevent Venus from holding serve in the next at 30 when Sitak intercepted a high volley and smashed an overhead winner before punching the air in glee.