Despite the controversies, delays and challenges in the run-up to the Commonwealth Games, India had risen to the occassion and is set to deliver a successful Games, both CGF chief Mike Fennell and Games Organising Committee chairman Suresh Kalmadi said.

Hailing the effort of the Organising Committee in pulling off the spectacular show, CGF supremo Fennell said, "The preparation has been filled with many challenges but the focus was on the competition of athletes. But the OC worked tirelessly to prepare these Games. I commend their efforts in putting together the Games."

"A big congratulation to the organising committee, may the Games be a tremendous succcess ... Over the next 11 days, we will witness the finest athletes from 71 competing to glory not only in pursuit of medals but friendship," Fennell said in his address.

Thanking the volunteers for the tireless work, he said, "They worked together in one common view for a successful Games. Also to the people of Delhi ... You have welcomed us with traditional hospitality. 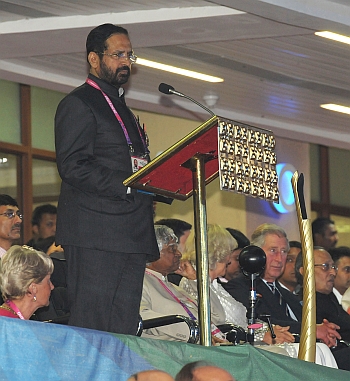 "Athletes have been touched by your kindness and your enthusiasm in being good hosts. Friendship can be achieved through true sport in the midst of adversity," Fennell said.

Kalmadi thanked the 71 Commonwealth countries for keeping faith to India despite the problems the Organising Committee in the run-up to the Games.

"Despite the bad publicity, all Commonwealth association stood by India as Delhi 2010 becomes the largest ever in the history of Commowealth Games," said Kalmadi.

"The IOA had a dream to make India sport-conscious, embrace all sports with passion. Former Prime Ministers Indira Gandhi and Rajiv Gandhi had successfully hosted the Asian Games.

"The Games will also contribute significantly to the Indian economy. More than 6,800 athletes from all 71 nations have put their faith on India. A new champion will be born in Delhi," he added.

Thanking the support of Prime Minister Manmohan Singh and Sonia Gandhi, Kalmadi said, "There have been delays and many challenges but we have been able to rise above that. The Prime Minister's encouragement made us feel 'yes we can'.

"I also thank Sonia Gandhi for her support to get the Games to India and then Prime Minister Vajpayee for backing the Games. Thanks to the two billion worldwide people...."

Greeting the people of Delhi in Hindi, Kalmadi said, "After a toil for seven years, 7,000 hours, the hopes and aspiration of more than one billion citizens of India are going to be fulfilled now. India are ready to host the great Commonwealth Games."

"Delhi has a fantastic legacy, superb airport, a great metro rail connectivity. We are impeccable as hosts. Delhi will now become a world class tourist destination.

"We have designed these Games around you, with you in mind," he added.

Kalmadi also thanked the 20,000-odd volunteers and said they are the "backbone" of the Games.

"I thank the media, artists, thousands of school children, wonderful citizens of Delhi and India ... The volunteers, they are the backbone of the Games.

"We had the longest baton relay spanning 1,90,000 kms. We are prepared to deliver a great Games. Our dream is coming true. India's big moment is finally here."