News
Business
Movies
Sports
Cricket
Get Ahead
Money Tips
Shopping
Sign in  |  Create a Rediffmail account
Rediff.com  » Sports » Could Bale be moving to Serie A? 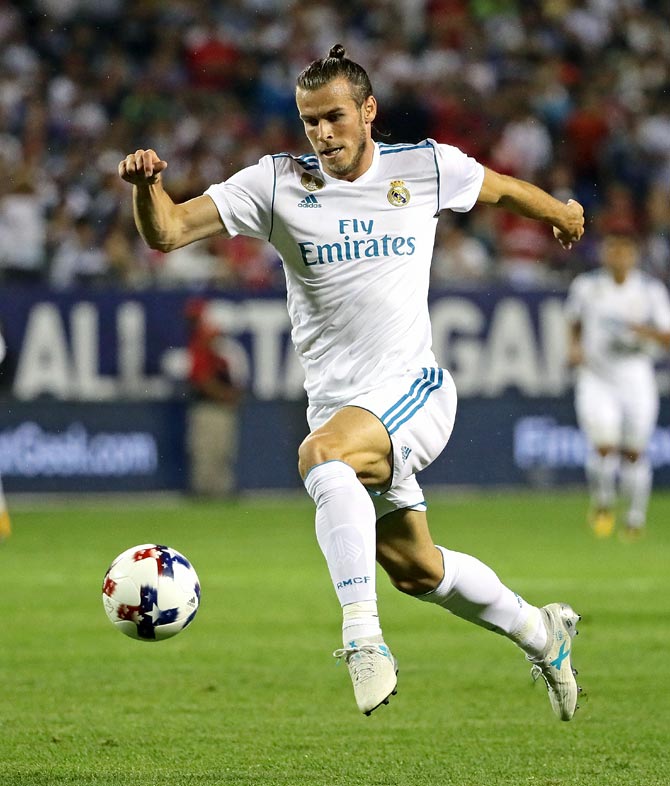 IMAGE: Real Madrid's Gareth Bale's proposed move to Jiangsu had collapsed after Real's board refused to approve his departure, with the Chinese club wanting to acquire the 30-year-old on a free transfer. Photograph: Jonathan Daniel/Getty Images

Gareth Bale’s rumoured move to Jiangsu Suning has become one of the biggest stories of the summer transfer window, but even if the Welshman signs for the Nanjing-based side there are no guarantees he will make his Chinese Super League debut any time soon.

Reports this weekend have claimed Bale will put pen to paper on a three-year deal with Jiangsu and earn a staggering one million pound per week as he leaves Real Madrid following a six-season stint during which the winger has won four UEFA Champions League titles and the 2017 La Liga crown.

Jiangsu Suning, who signed Croatian striker Ivan Santini from Anderlecht on Sunday. had been expected to sign Bale before the closure of the Chinese Super League's transfer window on Wednesday with claims the Wales international would be paid around £1 million ($1.24 million) a week to become the latest big name arrival in Chinese football.

But reports on Sunday said Bale’s proposed move to Jiangsu had collapsed after Real's board refused to approve his departure, with the Chinese club wanting to acquire the 30-year-old on a free transfer.

Jiangsu meet Guangzhou R&F, featuring another former Tottenham Hotspur star in Moussa Dembele, on Friday evening and are well adrift of CSL-leading trio Guangzhou Evergrande, Shanghai SIPG and Beijing Guoan, who are locked in battle for the title.

In contrast, the best coach Cosmin Olaroiu and his side can hope for is a fourth-placed finish, but Bale may not have to worry too much about Jiangsu and their domestic form.

Suning, the electrical retailer who have owned the club since late 2015, are also majority shareholders in Serie A giants Inter Milan and the prospect remains that Bale could move to the 18-time Italian champions on loan.

A precedent exists for such a switch, with Australia international defender Trent Sainsbury following the same path in 2017.

Sainsbury was signed by the club from Dutch side PEC Zwolle ahead of the 2016 CSL season as Jiangsu sought to take advantage of regulations permitting teams to field four foreign players, on the proviso one came from an Asian Football Confederation member nation. As an Australian, Sainsbury fulfilled that criterion.

However, just days before the start of the campaign, a Chinese Football Association directive to scrap the Asian player slot left Sainsbury’s future in doubt and ahead of the following season the central defender shifted to Serie A on a six-month loan deal.

The path linking the clubs has also been taken in the opposite direction, with Italian winger Eder joining Jiangsu from Inter last year while defender Miranda became Jiangsu’s latest recruit, signing at the end of last week after Inter annulled his contract.

With the traffic flow between Milan and Nanjing increasing, the prospect of Bale running out at the San Siro rather than the Nanjing Olympic Sports Centre remains a very real possibility.