Indian striker Sunil Chhetri continued to sparkle for Kansas City Wizards, scoring a hat-trick in the Major League Soccer team's 5-0 win over the University of Evansville in a friendly match at St Louis, United States.

Chhetri, who scored a goal in his debut for the Wizards in a practice game against University of Tulsa on Thursday, struck thrice in his side's 5-0 thrashing of University of Evansville.

In more good news for Chhetri, he has received his P-1 visa and International Transfer Certificate approval to become an official member of Kansas City Wizards.

The diminutive Indian scored his first goal of the match with a diving flick-on header off a pass by Graham Zusi who netted Wizards' opening goal.

Chhetri then made it 3-0 with a deft finish off a pass from Kyle Brown who broke into the rival box from the right.

The Indian, whose speed off and on the ball has impressed the Wizards management, completed his hat-trick by finishing smoothly from a one-on-one position with the rival goalkeeper after breaking through the center of the park.

The Wizards completed their 5-0 win with Fuzetti scoring their last goal of the match with a deflected free-kick.

Chhetri did not play in the Wizards 2-1 win over AC St. Louis in a friendly match later in the day.

Three days back, Chhetri got the P-1 visa and the ITC approval to officially become KC Wizards player.

KC Wizards manager Peter Vermes said Chhetri would feature in an attacking role in the center of the field similar to the way he has played in the I-League and for the Indian national team.

"He could probably play wide as well, but he hasn't had a lot of time in his career playing there," Vermes said.

KC Wizards will have to work on two issues concerning the team roster. The side now has 11 players for 10 international roster spots and the Wizards are thinking creatively in order to comply with MLS roster limits.

The team is looking into acquiring green cards for at least three players and for pursuing US citizenship of another whose father is an American.

The Wizards will also have to free up another roster spot to come down to the 24-player limit. Their next MLS match for KC Wizards is against Colorado Rapids at home on April 10. 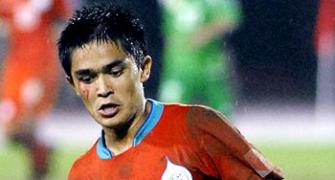 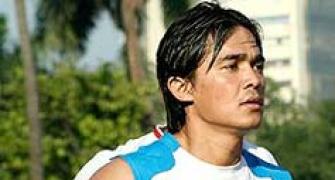 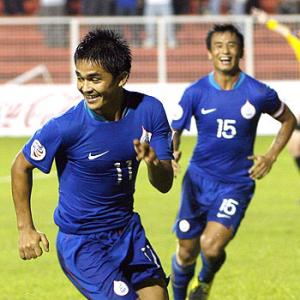