Indian Davis Cupper Rohan Bopanna and his Pakistani partner Aisam-Ul-Haq Qureshi have been conferred Peace and Sport Award from a Monaco-based foundation, their second honour in a week, for their message of 'Stop War Start Tennis'.

Bopanna and Qureshi received the award in Monaco on Thursday for publicising their belief that sports can play a part in promoting friendship between India and Pakistan.

Their message of 'Stop War Start Tennis' had fetched Bopanna and Qureshi the Arthur Ashe Humanitarian Of The Year award during the ATP World Tour Finals in London last month.

The two players have been playing with the message of 'Stop War Start Tennis' for quite some time on the Tour and in Grand Slams.

While presenting the award, Peace and Sport founder Joel Bouzou appealed to the governments of India and Pakistan to support the players' project to organize a symbolic tennis match at the Wagah border between India and Pakistan.

"Sport is ready for peace. But will governments rise to this challenge?" he asked. 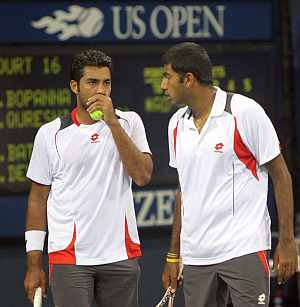 Bopanna and Qureshi rose to prominence by reaching the final of US Open this year, ending runners-up to the legendary Mike and Bob Bryan.

Inaugurated in 2008, the Peace and Sport Awards are conferred in recognition of sporting initiatives or to individuals who contributed significantly to peace and social stability in the world or in areas rendered vulnerable by poverty, the legacy of conflict or lack of social cohesion.

'Peace and Sports, the Organization for Peace Through Sport' was founded in 2007 by Olympic medalist and World Champion in Modern Pentathlon Joel Bouzou, the current president.

It works to build a sustainable peace worldwide by promoting sports and its values structured as an instrument of education of young generations and as a vehicle for social stability, reconciliation and dialogue between communities.

Neutral and apolitical organization, Peace and Sport is a global initiative under the patronage of His Highness Prince Albert II of Monaco.