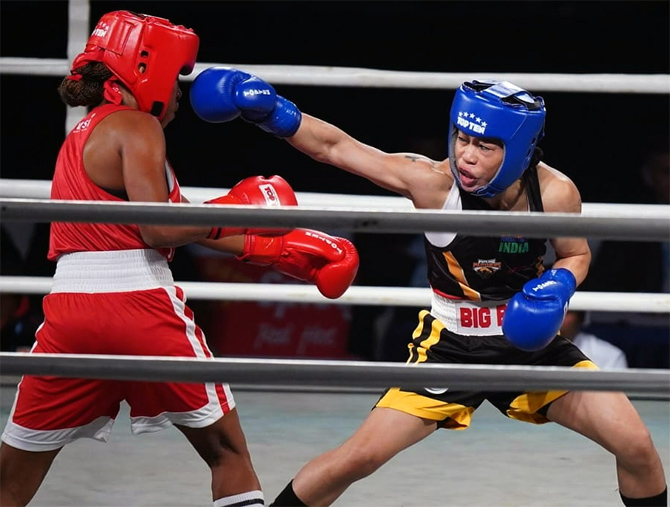 The celebrated MC Mary Kom won her bout in a dominating fashion as Punjab Panthers notched up their second successive victory in the Big Bout Indian Boxing League by beating Bombay Bullets 5-2 in Greater Noida, on Thursday.

Manoj Kumar's defeat at the hands of Bombay Bullets' Naveen Boora in the 69kg bout of the night meant that the two captains stepped into the ring with much more than academic interest left in the match.

And, Mary Kom did enough to impress the judges in each of three rounds to beat the Colombian like she did in the World Championship last year.

Khalakov held sway in the 57kg bout against Asian silver medallist Kavinder Singh Bisht. The 19-year-old dodged a left hook and landed a left straight smack on the Bombay Bullets boxer's face to enforce a standing count in the second round to seal the deal.

Prasad, who suffered a reverse on the opening night, redeemed himself by using his speed to counter Anant Chopade's longer reach. Young Manisha, standing in for Sonia Lather who is on national duty in the South Asian Games in Kathmandu, maintained the momentum with a facile win against Spaniard Melissa Noemi Gonzalez in the women's 60kg.

Once Mary Kom sealed the match in Punjab Panthers' favour, Naveen Kumar eked out a 3-2 verdict against Spaniard Emmanuel Reyas in the 91kg bout before Bombay Bullets gained another consolation win through Prayag Chauhan who beat the 18-year-old Mohit in the 75kg bout through a split decision.

Earlier, in a combative 69kg contest, 20-year-old Naveen Boora did not let Manoj Kumar's reputation come in the way of getting Bombay Bullets their first taste of victory.

Putting his height and reach to good effect against the experienced Manoj Kumar, Naveen Boora impressed with his ring craft and fearlessness. The bout was awarded 4-1 to Naveen Boora.

Mary Kom, the Punjab Panthers captain, won the toss and blocked the youth women's 57kg bout. Sapna Sharma was one of the two Punjab Panthers boxers who had lost their bouts against Odisha Warriors on the opening night.

Sapna would have had to fight National Youth runner-up Priya Kushwaha. The option of blocking a bout allows teams to bring strategy into play.