IMAGES from the Australian Open matches played on Monday 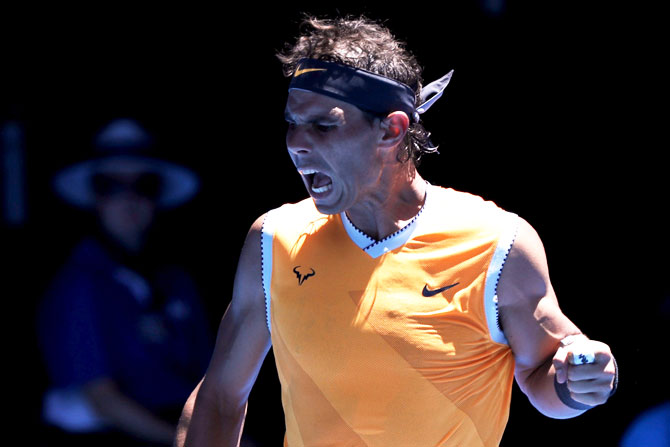 IMAGE: Spain's Rafael Nadal celebrates after winning a point against Australia's James Duckworth during their first round match at the Rod Laver Arena. Photograph: Kim Kyung-Hoon/Reuters

Former champion Rafael Nadal showed no signs of discomfort from his thigh strain as he sailed through to the second round of the Australian Open with a 6-4 6-3 7-5 win over local hope James Duckworth on Monday.

The second-seeded Spaniard had pulled out of the Brisbane warmup with a thigh strain to raise doubts about his campaign but he allayed those fears on Rod Laver Arena against an error-prone opponent.

"It's normal that beginnings are tough, but every day helps and every day makes me feel better, makes me feel more confident," Nadal, whose 2018 season ended early with ankle surgery and an abdominal injury, told reporters.

"So that's an important victory because (it) is the first victory since a while and at the same time... gives me the chance to be on court again. And that's what I need."

The first meeting between the 17-time Grand Slam champion, a winner at MelbournePark in 2009, and Australian wildcard Duckworth, who is ranked 238 in the world, always had the potential to be an uneven contest.

But the 26-year-old Duckworth, who reached a career-high ranking of 82 in April, 2015, did not help his cause by looking to attack Nadal from the start and committing 40 unforced errors in the process, compared to just 11 from his opponent.

Nadal, who is bidding to become the first man in the Open Era, and only the third man ever, to win each of the four Grand Slams twice, ran his opponent down with his superior court coverage and ability to hit winners under pressure. 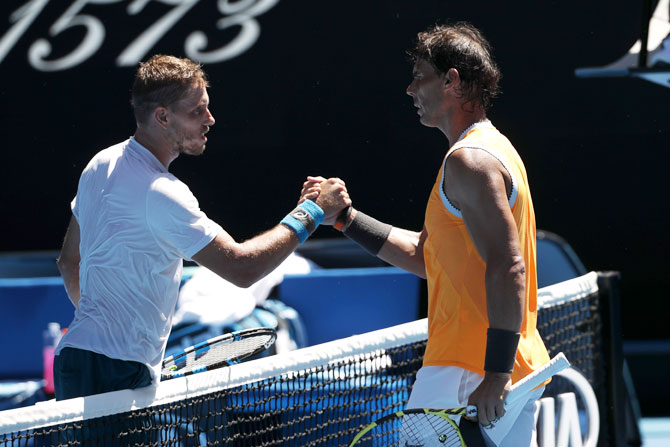 "I played against a super-aggressive player. Today he went on court with the determination to not play tennis the way I understand tennis," Nadal told reporters.

"(It) is not a negative point. Not at all. Believe me. He went on court probably doing a thing that works well for him, and he gives himself some chances. And he played smart and he played well."

Sporting a yellow sleeveless t-shirt and white shorts, Nadal hit his gear early by breaking Duckworth's serve in the first game which was enough for him to take out the first set.

After an early trade of breaks in the second, Duckworth served his sixth double fault to go down a break and then lost the second set with his eighth.

Two brilliant winners in the sixth game, which brought about an animated celebration from the Spaniard, gave him a break and a 4-2 lead but Duckworth got the break back in the ninth game.

The Spaniard, who will next meet the winner of Australian Matthew Ebden's contest with Jan-Lennard Struff of Germany, broke Duckworth for the sixth time and brought an end to the match with a brilliant backhand pass.

In his pre-match news conference Nadal said he has brought a remodelled serve to Melbourne aimed at generating more pace. After losing two service games in the match, Nadal was pleased with it.

"My serve worked well. I don't know my percentage, but was a lot of good positions after the first serve," he said.

"I felt solid with the second."

Federer serves up dominant first round win against Istomin 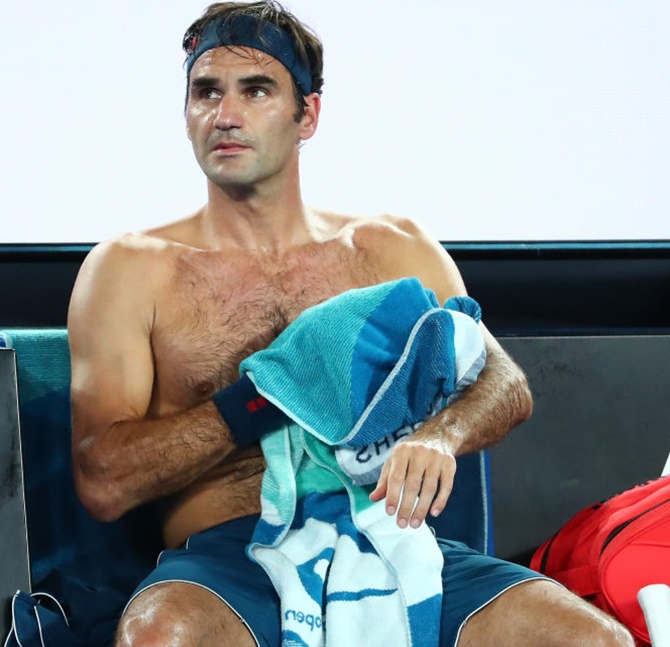 IMAGE: Roger Federer of Switzerland towels down in his first round match against Denis Istomin of Uzbekistan. Photograph: Michael Dodge/Getty Images

Defending champion Roger Federer served straight through Denis Istomin to win their first round encounter at the Australian Open, securing a 6-3, 6-4, 6-4 victory on Monday evening.

Istomin, of Uzbekistan, has twice reached the fourth round of a Grand Slam, and proved to be a worthy combatant from the back-of-the-court, equipped by a heavy, aggressive baseline game.

But the Swiss' mountainous serve proved too big an obstacle for his opponent to climb, which meant the title contender was rarely challenged on his own service games.

Federer will now play British qualifier Dan Evans, ranked 189 in the world, in the second round.

Champion Wozniacki through to second round with comfortable win 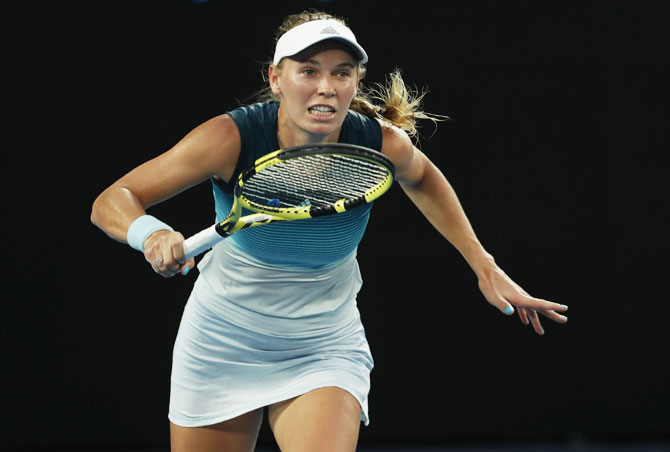 Caroline Wozniacki launched her title defence at the Australian Open with a comfortable 6-3, 6-4 win against Belgian Alison Van Uytvanck in the first round on Monday.

The third-seeded Dane broke Van Uytvanck once in each set and kept her unforced errors down to win the baseline battle in an hour and 33 minutes in the first match of the evening session at the Rod Laver Arena.

The 24-year-old Van Uytvanck, ranked 52, troubled Wozniacki with some well-disguised drop shots but did not have enough to register her maiden win at MelbournePark in her fifth appearance in both singles and doubles.

Wozniacki, who is battling rheumatoid arthritis, sealed the match with a forehand winner on her third matchpoint and will next meet Sweden's Johanna Larsson, who progressed after Vera Lapko of Belarus retired while trailing 7-6(5), 3-0.

Kerber untroubled in first round 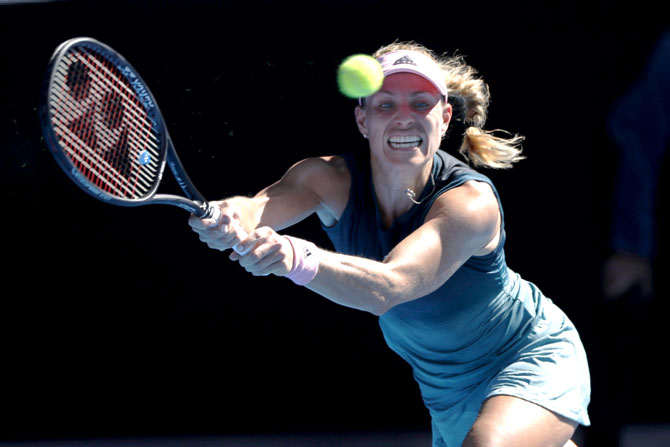 Angelique Kerber brandished her credentials as a title contender at the Australian Open with a straight-forward 6-2, 6-2 victory against Slovenia's Polona Hercog on Monday.

The Wimbledon champion minimised her time under the hot sun, where temperatures surpassed 30 degrees celsius (86°F) during the day-time matches in Melbourne, securing the straight sets win in just over an hour.

Her opponent, a former top-50 player, was too erratic to trouble the three-times Grand Slam winner, committing almost three times as many unforced errors as Kerber.

Kerber said her form improved during the match and her ball-striking was not side-tracked by the at-times inconsistent opponent.

"I played a lot of matches here already in Australia ... I have my rhythm," said Kerber, who played lead-up events in both Perth and Sydney.

Kerber was rarely challenged, and stepped up her relentless, grinding style on the handful of occasions she faced break points to move into the next round without losing any service games.

She will play Brazilian qualifier Beatriz Haddad Maia in the second round in a battle between two left-handed counter-punchers who have not previously met. 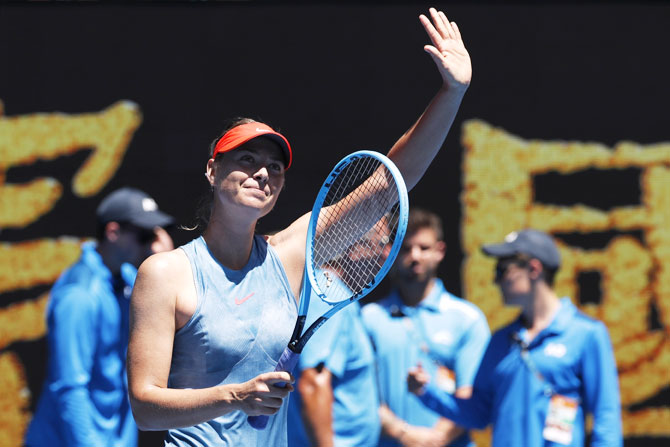 Former champion Maria Sharapova gave hapless Harriet Dart a 6-0, 6-0 shellacking to fly into the second round of the Australian Open on Monday and had no words of comfort to offer the British qualifier after leaving her in tears.

In the opening match on Rod Laver Arena, the 30th seeded Russian was all over the 131st-ranked Dart from the first point and wrapped up the match in little more than an hour after a ruthless barrage of power hitting.

The centre court humiliation had Dart weeping as she beat a hasty exit and Sharapova had little sympathy for the 22-year-old after her nightmare debut at MelbournePark.

"But when you're playing the first round of a Grand Slam -- I have been in many positions, last year Wimbledon I came out against a qualifier that played really well.

"You know, there is no doubt that my level wasn't where I wanted it to be, but she was there to take the match.

"So I'm not so much worried about my opponent, but I have to step up when the time is right and when I need to, so that's my main goal."

Dart, who made her Grand Slam debut at Wimbledon as a wildcard, briefly fired up the subdued terraces by grabbing a break point off Sharapova at 4-0 in the first set but blew the chance with an unforced error, one of 21 for the match. 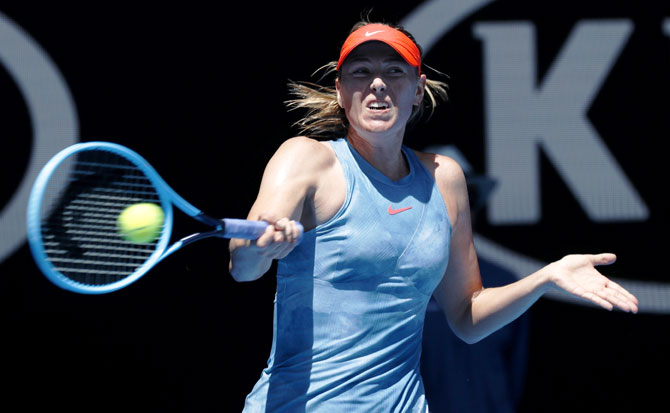 She saved two match points in the final game but fell on the third with a clumsy volley that flew wide and neatly summarised her day.

"Tried some things -- didn't work," the misty-eyed Briton told reporters, barely able to raise her voice above a whisper.

"She doesn't really give you anything... It's just unfortunate I didn't get on the board."

Dart was right about Sharapova not giving up many free points. The five-times Grand Slam champion landed 35 of her 36 returns, while blasting 20 winners in the rout.

Sharapova, who last tasted Grand Slam success at the 2014 French Open, had no taping on her limbs and moved well less than two weeks after being forced to retire with a thigh injury during her quarter-final clash at the Shenzhen Open.

The tall 31-year-old said she was still troubled by an injury to her right shoulder which forced her to cut her season short after the US Open.

"That's a good question," she said, when asked whether her right arm could ever be fixed.

"I have asked Dr. Altchek that many times. I saw him beginning of December, and he says it's a day-by-day pain management situation." 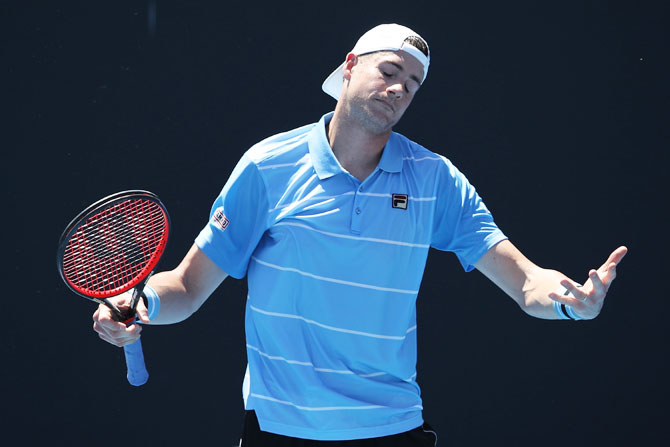 IMAGE: USA's John Isner did not have answers to compatriot Reilly Opelka in their first round match. Photograph: Mark Kolbe/Getty Images

Wimbledon semi-finalist Isner fell at the first hurdle at MelbournePark for the second year in a row, having been beaten by unseeded Australian Matthew Ebden in a major shock last year.

The 21-year-old Opelka, an inch taller than the 6ft-10in Isner (2.08m), broke the ninth seed's perfect 9-0 winning record against Americans at the Grand Slams in a match featuring 87 aces.

Isner, 33, was crestfallen to be booking an early flight out of Australia but said he would work through the disappointment.

"You keep working and put your head down and kind of disappear once I leave here and just work," he told reporters.

"And, you know, trust that that's going to pay dividends for me in the future."

Opelka will play 102nd ranked Italian journeyman Thomas Fabbiano for a place in the third round.

© Copyright 2020 Reuters Limited. All rights reserved. Republication or redistribution of Reuters content, including by framing or similar means, is expressly prohibited without the prior written consent of Reuters. Reuters shall not be liable for any errors or delays in the content, or for any actions taken in reliance thereon.
Related News: Maria Sharapova, Rod Laver Arena, James Duckworth, Rafael Nadal, Getty Images
SHARE THIS STORYCOMMENT
Print this article 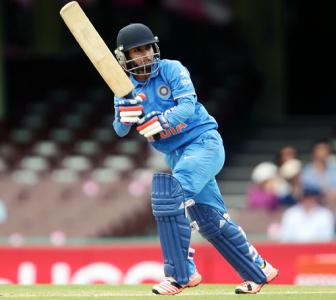 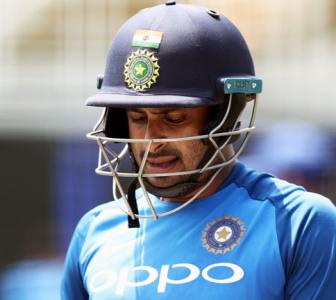 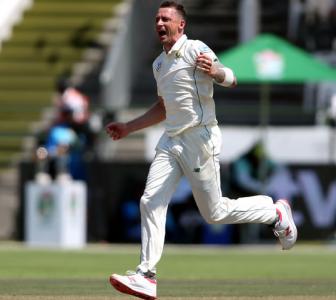 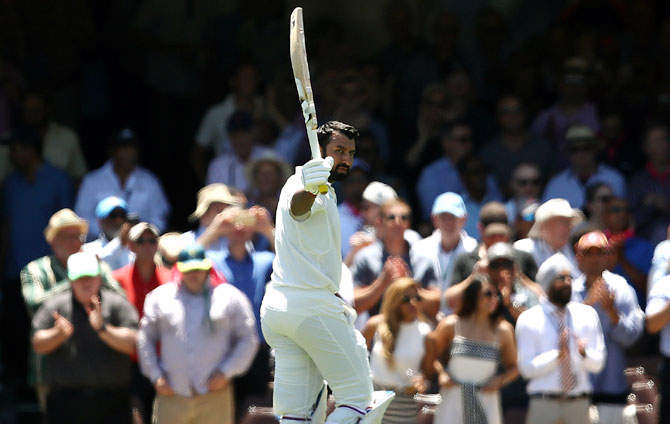 'World can learn to play Test cricket from Pujara' 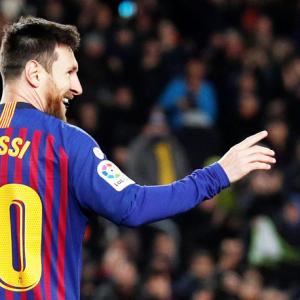