India established a three-goal lead within the first 22 minutes of play, but poor defending allowed the Kiwis stage a comeback and draw abreast early in the second half, at the Hellswood Sports Complex in Mundrah.

Yuvraj's stunner off a feed from Sunil, in the 60th minute, put India ahead again before Tushar Khandekar consolidated the lead three minutes later.

Though New Zealand pulled one back towards the end of the match, they fell short by a goal.

Sunil opened the scoring in the first minute before setting up Walmiki for the second goal two minutes later.

V Raghunath then converted India's second penalty-corner in the 22nd minute to give the Indians what seemed an assailable lead, 3-0.

The combination of Sunil and Yuvraj once again came alive after New Zealand cancelled out India's three-goal lead in the second half.

The Kiwis caught the Indian defence unawares, scoring three goals in the space of ten minutes midway through the second half.

Blair Hilton scored a brace (49th and 59th minutes), while Shay Neal stole one off Indian goalie PR Sreejesh in the 53rd minute. Stephen Jennes, at the end, added to the Kiwis' tally in the 65th minute.

"It is good result for a training match. We again did some silly mistakes and conceded avoidable goals. Against much stronger teams like Australia we would have been punished but we got away with the Kiwis.

"I work on attacking hockey. From that angle I am happy the way we scored. Yes, we have to work in some areas to avoid conceding goals," Nobbs said.

India now travel to Perth to play in the Lanco International Super Series, which starts on Thursday. 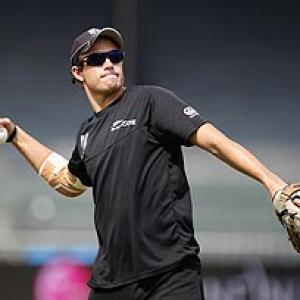