Somdev out of singles, wins in doubles

Second seed Somdev Devvarman suffered a shock defeat at the hands of lower-ranked Australian Chris Guccione to bow out of singles but progressed to the doubles semi-finals of the ATP Challenger event in Charlottesville.

Qualifier Yuki Bhambri has already crashed out, ending India's challenge in the singles event of the USD 50,000 hard court tournament.

Somdev though advanced to the doubles semifinals along with partner Treat Conrad Huey with a 7-6 (4), 4-6, 12-10 win over second seed Australians Stephen Huss and Peter Luczak.

They next face the local pair of Robert Kendrick and Donald Young, who shocked third seed South Africans Izak van der Merwe and Rik de Voest 6-4, 4-6, 10-6 in their quarterfinals. 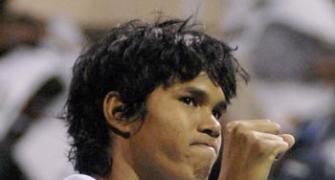 Bhupathi-Mirnyi in 2nd round at Wimbledon