India's K T Irfan finished fifth, while Ganapathi Krishnan was disqualified from the men's 20km race walk of the 17th Asian Games in Incheon on Sunday. 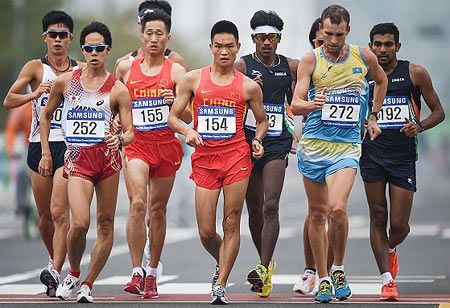 Irfan clocked 1:23:18, finishing more than three minutes behind gold-medallist Wang Zhen (1:19:45) of China. Irfan's timing was not even his personal best, which stands at 1:20:21 and also happens to be a national record.

Meanwhile, it was heartbreak for Krishnan, who was disqualified for losing contact twice and bending his knees during the race.

The race rules require that the athlete's back toe should not leave the ground until the heel of the front foot has touched down. Krishnan violated this rule twice.

The other rule requires that the runner's supporting leg must straighten from the point of contact with the ground and remain in that position until the body passes directly over it. Krishnan failed to adhere to this as well, resulting in his disqualification.