Rehan Poncha helped Karnataka to retain the top position with 18 gold medals on the penultimate day of the 65th Senior National Aquatic Championship by winning his fifth gold.

"I was not sure till three weeks ago whether to take part in the competition, but took a last minute decision after consulting my coach. I hope I get a sixth gold tomorrow," Poncha, who is aiming at a berth in the London Olympics, said.

Poncha's effort in the 200 metre individual medley was all the more satisfying as he pushed Olympic qualifier Sandeep Sejwal to the second position.

"It's not my main event, (yet) it's my best time," Sejwal said after settling behind Poncha for the silver.

Police team's Richa Mishra continued her winning spree as she collected her fifth gold as also her team's, winning the 200 metre individual medley, beating down a double challenge from Karnataka girls, Pooja R Alva and Bhoomi R Motwani to settle for silver and bronze medals respectively. 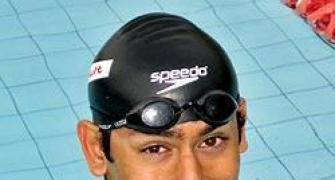