Jyoti Randhawa turned the clock back with a flawless 67, giving him a share of the lead after three rounds at the Resorts World Manila Masters in Manila, on Saturday.

Randhawa, an eight-time Asian Tour winner who last won the tour title in 2009, is now 15-under alongside Philippines' Miguel Tabuena (64).

Adding to Indian hopes was defending champion, SSP Chawrasia (69) who just couldn't hole putts. He did not drop any bogeys and is now 13-under, tied-7th two behind the leaders.

"I didn’t take my chances today. I am not hitting my long-irons too good. All the par- fives today, I sought of laid up to the front of the greens and made up and downs for birdies. It was just a strategy of mine," Randhawa said.

"The course is getting drier I think, conditions are much better today. The fairways have improved a lot. The greens are always good here, if not for the rain this week. I will be glad if I can continue to do the same thing for the final round tomorrow," he further added.

Close behind the leading duo of Randhawa and Tabuena were four players, Micah Lauren Shin (US), who shot 66 to share third place with Philippines’ Justin Quiban (70), Thailand’s Namchok Tantipokhakul (63) and Arnond Vongvanij (70). 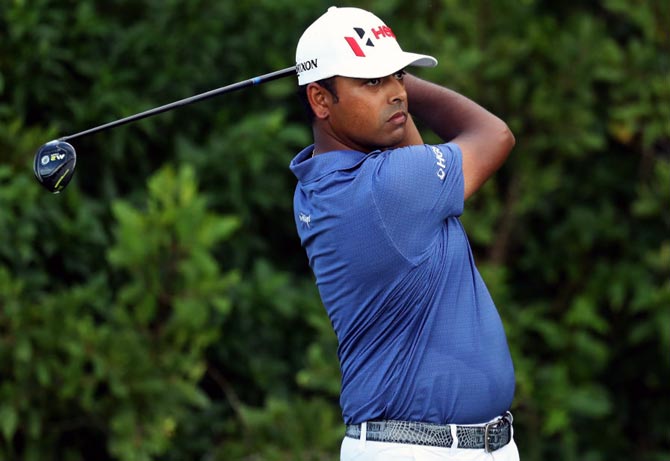 Anirban Lahiri gave himself a good shot at another top-10 finish with a steady two-under 69 at the OHL Classic golf tournament at Mayakoba, in Playa del Carmen, Mexico.

Lahiri's 69 helped him move from T-11 to T-9 as the second day's action was suspended early because of darkness.

The Indian started on the back nine and was even par with two birdies and two bogeys and turned in even par. On the second nine, he birdied the third and the closing ninth for 2-under 69.

Patton Kizzire, the 18-hole leader after a 62, overcame the wind and the rain and a double bogey on his 10th hole during his 1-under 70 and finished 36 holes at 10-under 132 to be the clubhouse leader.

However, Patrick Rodgers was atop the leaderboard at -11 but he had three more holes to play when darkness forced stoppage of play.

Rodgers ran off four straight birdies on the back nine and was 7-under through 15 holes and 11-under for the tournament. He had taken his tee shot on the par-5 seventh hole. He is the only player in the field without a bogey.

Rickie Fowler, playing for the first time since the Presidents Cup, was at 10-under with three holes left.

Brian Gay and Brandon Harkins, the 31-year-old rookie, were at 9-under 133. Martin Piller was at 8-under and still had nine holes to play. PHOTOS: Italy on the verge of missing World Cup after Sweden loss 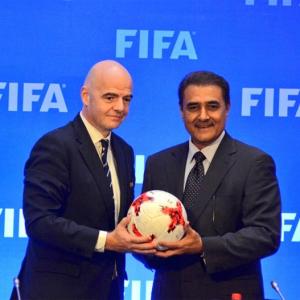