IMAGE: India had won the mixed team gold at 2018 CWG for the first time and Chirag feels they can repeat the performance this year too. Photograph: Athit Perawongmetha/Reuters

The sweet taste of the Thomas Cup title still lingers but Chirag Shetty, one of the architects of that historic triumph, knows it's time to move on and focus on the next challenge at hand -- Commonwealth Games.

One half of India's best doubles pair, Chirag played a pivotal role both on and off the court to help India achieve an unprecedented win at the Thomas Cup tournament, considered to be the 'world cup' of shuttle sport.

"The feeling of that week still remains but it's time to get back to training and face the next challenges, starting with the Commonwealth Games, World Championships and Asian Games," the 24-year-old from Mumbai told PTI.

"We have done well in Commonwealth Games last time and the Thomas cup win will act as a booster for us to retain the mixed team gold."

India had won the mixed team gold at 2018 CWG for the first time and Chirag feels they can repeat the performance this year too.

"Competition is much tougher in Thomas Cup. So winning the trophy for me was simply the highlight of Indian badminton. CWG is a mixed team event, so naturally the dynamics will change.

"Malaysia has a strong team this time also. They might be seeded higher than us because of their women's doubles and mixed doubles players, but if we are able to have that fire once again and urge to win, we can retain the gold."

Chirag and his partner Satwiksairaj Rankireddy will also look to change the colour of their individual silver medal (in men's doubles) that they had secured at Gold Coast.

"Last time we were very new in the circuit. But now a lot of things have changed. We are now in the top 10, we have the experience of competing and winning against top players. So winning the gold will be high on our priority," he said.

The Commonwealth Games is scheduled to be held in Birmingham from July 28 to August 8 this year.

But first up for the world number 8 Indian pair is the Indonesia Open Super 1000 and Malaysia Open 750 tournament in June.

"We have sent our entries for Indonesia Super 1000 but we are still not cent per cent sure if we will play that event as Satwik is recovering from a knee injury," said Chirag, who along with Satwik, had pulled out of Thailand Open due to the injury.

"It is nothing major but as a precaution we might skip the event as CWG is more important and we need to be in the best shape possible. We have been playing for a week and half during Thomas Cup and were exhausted also. We will play the Malaysia Open for sure."

Chirag and Satwik dished out some superlative performance at Bangkok as they won all their matches, with the loss against Chinese Taipei's Lee yang and Wang Chi-Lin in the last league match being an exception.

"I was extremely upset after that match. I also spoke to my mental trainer. I made some silly mistakes and couldn't get a point for my team but (Kidambi) Srikanth told me just to forget about the match and focus on the quarterfinals.

"Thereafter when I went to the court, I just wanted to do everything possible to get that point, so that I have no regrets. We managed to silent Malaysia, who had a huge support."

Talking about his role in the team, Chirag said: "I enjoyed my role as someone who was neither a newcomer nor a veteran. So I focussed on creating team bonding as much as possible whether it was via making Instagram reels or dancing after the matches. We even got Srikanth to dance." Pakistan's Maroof to stay with daughter in CWG village 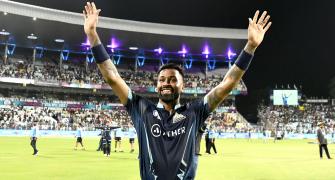 David Miller gives his career a boost through IPL 2022