A game that was honed on the sandy beaches of the Black Sea coast of Constanta will be on show for the world to savour in Saturday's Wimbledon final as Simona Halep earned a chance to fulfil one of her mother's cherished dreams.

So what if the opponent facing her is an American great in pursuit of a record 24th Grand Slam title? Who cares if the Romanian has won only one of her previous 10 meetings with Serena Williams?

As far as Halep was concerned, her 6-1, 6-3 semi-final win over Elina Svitolina meant that her mother Tania will finally get to experience something she has been dreaming of for more than a decade.

"About 10, 15 years ago she said her dream is to (see me) play a final in Wimbledon because everyone is here, (including the royals and the celebrities who sit in) the Royal Box (on Centre Court)," said a beaming Halep.

"She said it would be an unbelievable moment.

"So today her dream came true as I will play a final. It's a very special moment. To be able to play Wimbledon final, it's pretty amazing. I will enjoy for sure."

Considering Halep developed her baseline skills "on the sand and also in the water of the sea", it is perhaps unsurprising that she was initially considered something of a claycourt specialist. The French Open has been her most successful major with three final appearances -- including a win in 2018.

But her run to the Wimbledon final not only proved that her game is no longer one-dimensional as it was in the past, when she would only venture off the baseline as a last resort, but that she also has the weapons to make an impact on the sport's slickest surface. IMAGE: 'I'm desperate to win Wimbledon more than to stop her. I will focus on myself'. Photograph: Shaun Botterill/Getty Images

"I have a better game these days. I play some drop shots," said Halep, who came out on top in eight of the 10 net points she was engaged in on Thursday.

"I use the slice more. The serve is helping me. Now when the ball is coming to me, I know what to do with it.

"I can play everywhere, against anyone. I know how to change some things when (things) don't work very well," added Halep, who would have contested Grand Slam finals on three different surfaces come Saturday as she also finished runner-up at the Australian Open in 2018.

"I feel confident and I'm not scared any more about how the ball bounces. And also I feel stable on my legs, which is very important on the grass."

Being more sure-footed on turf means the Romanian, who admits she is a lover of chocolate, ice cream and cheesecake, cannot wait to turn up for Saturday's final.

"It's a great feeling to face Serena in a Grand Slam final," said the 27-year-old.

"I'm desperate to win Wimbledon more than to stop her. I will focus on myself. I'm not thinking about her record. Her records are huge already.

"If you are able to win, makes it sweeter."

And should Halep triumph, her mother may well get the chance to sit in the Royal Box next year -- considering the All England Club invites the parents of title holders to see their opening match from a seat that money cannot buy. 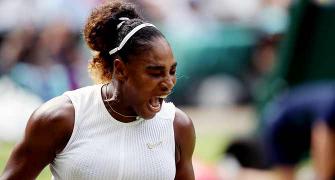 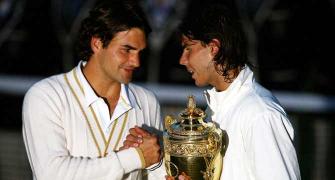 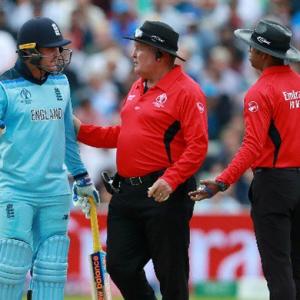