Abhijeet Gupta's silver medal ended a long drought for Indians in the Open section of the Chess Olympiad.

After a gap of 22 years -- the last one being Dibyendu Barua's gold medal on board two in Novisad 1990 -- an Indian won a medal for individual performance. BPCL employee Gupta, who is scaling one peak after another, bagged his 23rd medal representing India in various age-groups, Asian and Commonwealth championships.

A remarkable feat, indeed, and the Grandmaster says he will cherish memories of it.

"This one is very special. I will cherish this for a long time. Chess is not an Olympic sport yet, but, to us, the Olympiad is the Olympics and winning a medal here is so very special," Gupta said. 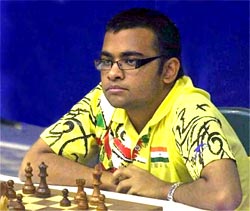 Gupta scored an excellent seven points from nine games and had the second-best performance on the fourth board, behind Vladislav Tkachiev of France.

A total of 158 nations took part in the event, but since chess is not an Olympic sport, the significance of the medal does not stand as tall back home.

"Yes, I know this, but it is significant for the chess world. I hope we get due recognition in some time, with chess a medal sport in the Asian Games," he said.

Even as he closes in on the milestone of 25 medals, Gupta knows that chances of him being treated like Olympic medal winners are slim.

"It's not only me, Tania (Sachdev) also won a bronze; it's an Indian double and I am very happy for Tania too. We have the same trainer and we also work together many times."

The Indian women's team finished fourth in the event.

Gupta will also add valuable points to his present rating which will strengthen his position among the world's top 100 players.

"Currently, I am exactly 100. I have been in the top 100 a few months back, but I hope, after this performance, I will probably get used to it," Gupta noted, after amassing 13 rating points from the Olympiad to take his rating to career-best 2667 points.

Speaking about the team's performance, he was a little disappointed. It was a dismal show by the Indian men, who finished 35th in the overall standings, starting as 13th seeds.

"It was like everyday we were hoping to win the match after the third round and every day we would make some mistake and it always ended in draws. This was a little pessimistic for us, but, in any case, it's a thing of the past now," he said.

Asked about his maiden appearance alongside Parimarjan Negi, Gupta was happy with the way things unfolded.

"Sasikiran, Negi and myself worked for some days in Delhi before the Olympiad. There was no special pressure playing here the first time as I have been facing similar opposition recently. I think in team events, the collective form is important along with individual brilliance."

About his own form, Gupta was, as usual, pragmatic.

"I was not playing too well here but things went my way in a couple of games," he said.

Signaling this as a start for the younger generation, Gupta hoped that Indians could soon make their way amongst the best.

"I think the day is not too far when we will be contenders for the medal as a team also. This time it did not happen but I am sure the way the younger guys keep us busy, we are bound to improve from here," he said with a wink.

About his plans for the future, he said it's going to be a busy season ahead.

"I play the Baku Open in ten days and after that I have to train for a couple of weeks in October, then some more tournaments. I have my hands full till the end of the year and I hope to be around 2700 soon as I can." 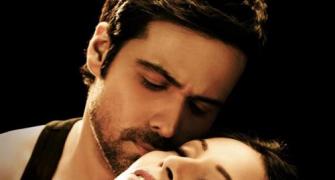 Abhijeet gets silver, bronze for Tania at Chess Olympiad