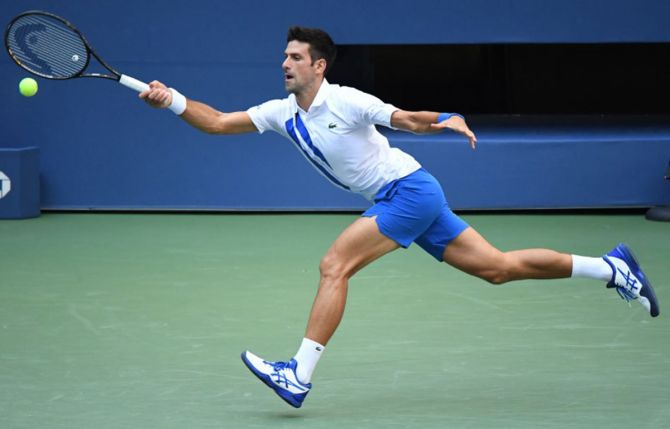 IMAGE: Novak Djokovic in action during his US Open fourth round match against Pablo Carreno Busta on Sunday. Photograph: Danielle Parhizkaran-USA TODAY Sports/Reuters

World number one Novak Djokovic was disqualified from his US Open fourth round match against Pablo Carreno Busta on Sunday after the Serbian struck a line judge with a ball following a point.

Here's a look at his rollercoaster 2020 season so far:

*Defeated Greek Stefanos Tsitsipas 6-3, 6-4 to lift his fifth Dubai Tennis Championships title in February. Victory also extended his winning streak to 18 matches in the season before the Tour was suspended due to the COVID-19 outbreak.

*Joined other elite athletes in the fight against the novel coronavirus by pledging 1 million euros ($1.18 million) to help buy ventilators and other medical equipment in his native Serbia.

*Came under heavy criticism for hosting the Adria Tour exhibition tournament amid the pandemic in June as fellow professionals Grigor Dimitrov, Borna Coric and Viktor Troicki tested positive for the novel coronavirus after playing in the tournament.

*Djokovic returned a positive test for COVID-19 on June 23, before he apologised to all individuals who contracted the virus after playing the tournament in the Balkan region. He tested negative for the virus nine days later.

*Defeated Milos Raonic 1-6, 6-3, 6-4 in the final to win the Western & Southern Open - his first tournament back after the Tour's resumption.

*Dropped just one set en route to the US fourth round, where he defaulted after hitting a line judge with a ball. The disqualification ended Djokovic's 26-0 winning run in 2020. 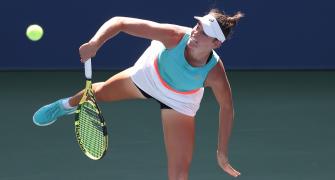