News
Business
Movies
Sports
Cricket
Get Ahead
Money Tips
Shopping
Sign in  |  Create a Rediffmail account
Rediff.com  » News » Why we must salute the heroic saga of Joginder Singh 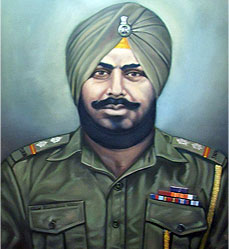 Fifty years ago this day, October 23, Subedar Joginder Singh began the battle of his life.

On learning that Joginder Singh was a Param Vir Chakra awardee, the People's Liberation Army, in a mark of respect for which the Chinese are not renowned, repatriated his ashes with full military honours.

No tribute can be greater than an avowal of valour by the enemy. M P Anil Kumar pays tribute to one of India's brave heroes.

Although undemarcated, the Sino-Indian border had by and large existed unaltered for almost three millennia, sanctified by the geographical principle of watershed, which is generally understood as the crest of high mountains.

The eastern border about Jammu & Kashmir, carved at the Treaty of Tingmosgang signed after a war between Ladakh and Tibet in 1684, had remained so since.

The eastern border (North-East Frontier Agency) received its official imprimatur at the tripartite conference of Tibet, India and China held at Shimla in 1913-14. Initialled by the Chinese representative, the McMahon Line did not create a new border but it simply delineated the traditional, prevailing administrative boundary there.

Since Tibet was an independent entity having freed itself from the Chinese yoke at the time of the Shimla Conference, ratification by Beijing was not necessary, and therefore Beijing was deemed to have initialled the Indo-Tibetan agreement as a valued witness.

Mind you, it was Britain, dreading Russia's 'evil' sway over Tibet, who propagated the myth of Chinese suzerainty over Tibet. Thus, the cartographical exercise at Simla had full legal validity.

The Sino-Indian agreement on Tibet signed on April 29, 1954 was a boon for China, for India had recognised Tibet as a region of China and forsook her rights in Tibet that she had inherited from the British government.

With Tibet deep in his pocket, with the 'Five-anti campaign' having cleansed the country of bourgeoisie, with the Korean crisis behind him, with 'liberated' China on course to blossom into a Communist Shangri-La, Chairman Mao thought the time was ripe to elevate his standing further by putting 'high-flying' Nehru in his place.

No better course than injecting venom into the Hindi-Chini brotherliness, eh? No better way to stir the pot than usurping acres of Indian territory, eh?

Even before the ink on the agreement had dried, expansionist China questioned the alignment of the Sino-Indian border. On July 17, 1954, China protested against the presence of Indian troops in Barahoti (Uttar Pradesh).

Soon, emboldened by the passivity of the Indian government, China laid claim to Aksai Chin and NEFA, and the Chinese army commenced calculated intrusions across the border, to shove the boot in.

In August 1962, in an act of belligerence, the People's Liberation Army occupied the Thag La ridge, swooped down 2.2 km southwest and encircled the Dhola post located south of the river Namkha Chu. The Indian government ordered the army chief to 'throw' the Chinese out of Dhola area on September 22.

The Indian Army's newborn IV Corps mobilised troops to carry out this impossible task, for, the Chinese were ensconced on commanding heights at the western extremity of the McMahon Line where marshalling and massing of troops were not just a logistical nightmare, but a tactical blunder as well.

At daybreak on October 20, the PLA launched simultaneous attacks on the Namkha Chu sector, other frontier divisions of NEFA as well as Ladakh. By the 23rd morning, the PLA had grabbed enough terrain to 'throw' the Indians out of the Dhola-Thag La area.

(Titbit: The CIA-mounted Bay of Pigs invasion ultimately snowballed into the Cuban missile crisis that nudged the world to the brink of Armageddon. Coincidentally, the PLA timed the October 20 incursions with the American naval quarantine of Cuba. Very clever move, for the global spotlight was on Cuba, and the Chinese aggression went largely overlooked by the world.)

China coveted Tawang madly, and the Dragon's primary objective in NEFA was the occupation of Tawang, for which the PLA had swarmed the Bum La area with a division. From the McMahon Line, the 26-km Bum La-Tawang foot-track was the shortest and the least perilous approach to Tawang.

The Bum La pass, at 4,492 metres, is broad and motorable. Approximately 3 km southwest of Bum La, and west of the foot-track stood the feature called 'Twin Peaks', from which one could espy Chinese activities across the McMahon Line.

The 1st Sikh battalion was charged with making this approach to Tawang impassable. To achieve this end, its Delta Company, commanded by Lieutenant Haripal Kaushik, was tasked to base his outfit at Tongpeng La, a pass situated a km southwest of the 'Twin Peaks'.

Between the 'Twin Peaks' and Bum La, there existed an Inspection Bungalow (IB) on a stretch of flatland. The nearby IB ridge, roughly 2 km south of Bum La, was an ideal redoubt to thwart access to 'Twin Peaks'. The 11th platoon of Delta Company, under Subedar Joginder Singh, deployed at the IB ridge, set up defences to halt the Chinese advance in their tracks.

As dawn began to brighten the morning of October 20, a JCO of the Assam Rifles outpost stationed at Bum La noticed hundreds aggregated across the border and he alerted the 11th platoon. Joginder promptly despatched a section under Havildar Sucha Singh to reinforce the Bum La-post, and then sought 'second line' ammunition from his company HQ.

Hair-trigger ready, everybody held their breath, in anticipation of gunfire. Which dragged on, and on, till 0430 hours on October 23. They first let off volleys of mortar and anti-tank guns (to destroy Indian bunkers), and then about 600 Chinese attacked the Assam Rifles post. Sucha Singh led the vanguard to fell several Chinese and then withdrew his contingent to join his parent platoon at the IB ridge.

Having overrun the Assam Rifles outpost, with the objective of capturing 'Twin Peaks', the enemy launched a concerted assault on the IB ridge, at first light.

Joginder Singh, born on September 26, 1921 to a land-owning farmer family in Moga (Punjab), was enrolled in the regiment on September 28, 1936. He carried a reputation of being forthright, honest and a professional soldier.

After studying the topography, using the local resources at the platoon locality astride the IB ridge, he made his men fortify themselves in a fieldwork of tactically-sited bunkers and trenches.

The platoon had a stock of four days' rations. Ill-shod (jungle boots) and unsuitably-clad (no winter clothing), the Himalayan chill made his men shiver, but Joginder motivated and rallied them to focus on their task of giving seasoned PLA servicemen blooded in mountain warfare the shivers.

He knew the IB ridge dominated the Bum La bowl, and the climb from the bed of the nullah to their platoon fieldwork was steep, and therefore the Sikhs would be able to mow down the enemy even with outmoded Lee Enfield 303 rifles.

Since the disposition within the establishment (the government and some among the top brass) was pacifist, the armed forces were deficient on many counts.

As ammo was at a premium, each round had to account for a kill, and he therefore made his men hold fire till the enemy shinnied up and was in the weapon-range.

The gunfight began. The mortars and artillery guns engaged the enemy with telling effect. Mounting casualties and sustained fire compelled the Chinese to take cover behind boulders first and then retreat. Only 17, half the platoon, survived the Chinese offensive.

Having repulsed the first wave, Joginder asked again for more ammo from Tongpeng La. While the account of ammo expenditure was being taken, the Chinese had regrouped to hurl themselves all-guns-blazing at the Indians.

Apparently an echelon had climbed unobserved from the right flank. The shooting that ensued was far more ferocious.

Joginder, who was scurrying between two sections, took a machinegun burst on his thigh. Dripping blood, he hopped himself into a bunker and tied the field dressing. He refused evacuation, and continued screaming instructions and adjusting defences.

When the gunner died, he took over the 2-inch mortar and fired some rounds to disrupt and disperse the enemy's raid. His platoon soon accounted for most of the Chinese, but by then the majority of his men had been either killed or seriously wounded.

There was just a breather for the men standing, for, before one could drawl 'Zhou En-lai', the Chinese had briskly mustered about 200 troops and resurrected another foray, to snatch the IB ridge. Sensing the gravity, Lieutenant Kaushik radioed Joginder if he could direct SOS fire on own defences to defuse the Chinese onslaught.

"Yes, Sahib," was the prompt reply. That, alas, would be the last communication with Joginder and his platoon.

Lieutenant Kaushik urged Captain Gosal to promptly engage the IB ridge with Red-over-Red artillery barrage (shelling on to own positions with the likelihood of casualties to own troops, but something that would definitely take a heavy toll of the enemy).

By the time the cannonade ceased, the platoon had run out of ammo, and Joginder had readied the remnant of his platoon for a head-on, last-ditch attack.

With fire raging in their belly, screaming the battle cry 'Bole So Nihal Sat Sri Akal', the Khalsas killed a score of 'shocked-and-awed' Chinese soldiers in the bayonet charge.

But Chinese troops continued to clamber up and overpowered Joginder in close quarter combat. All but four personnel from the platoon perished in the bloody battle. While a badly wounded Joginder was taken as a prisoner of war, the other three gave the slip, trekked on the bridle-path to the main defences at Se La, and narrated the ringside account of the fierce fighting that raged for four attritional hours. 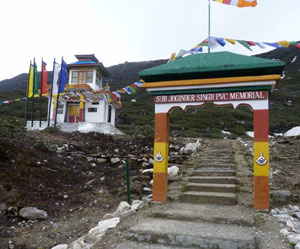 Joginder Singh passed on a little later in captivity.

Subedar Joginder Singh was decorated with the Param Vir Chakra, posthumously, for his remarkable leadership under fire and the gallant defence of IB ridge.

On learning that Joginder was a Param Vir Chakra awardee, the PLA, in a mark of respect for which the Chinese are not renowned, repatriated his ashes with full military honours to the battalion on May 17, 1963. No tribute can be greater than an avowal of valour by the enemy.

The urn was later brought to the Sikh Regimental Centre at Meerut, where Colonel Shamsher Singh, the commandant, received it. The urn was honoured at a memorial service held at the Gurdwara Sahib the next day. Later, in a poignant ceremony, the urn was handed over to his widow Gurdial Kaur and young son.

Besides a memorial in Moga town, the Indian Army has canonised the courage of this brave son by building a monument at the forward slope of IB ridge.

Postscript: The Delta Company in 1 Sikh is famed for exceptional heroism. In fact, it is called the 'Bahadur Company' for earning two Param Vir Chakras and two Mahavir Chakras, besides several other bravery medals.

Lieutenant Haripal Kaushik was awarded Vir Chakra for his heroics in the 1962 war. He, now a retired Colonel, was a member of the Indian Hockey teams that won gold medal at the 1956 and 1964 Olympic Games held at Melbourne and Tokyo respectively.

'I was, I am, and will remain anti-Chinese'