In the '70s, when other Latin American nations were crumbling under ruinous debt, Venezuela remained economically solvent and politically stable.
Not only was it a democracy in a continent plagued with coups and fallen governments, it had the highest standard of living among all Latin American nations.
Devastation struck when oil prices started collapsing in 1982, following a global oil glut. Venezuela's economy contracted overnight.
Radha Roy Biswas watched the country she loved spiral into political and economic chaos. 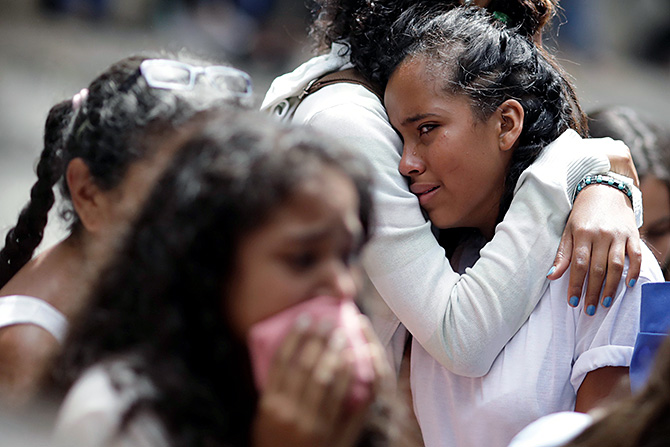 IMAGE: Friends of Jhoufer Hernandez Vasquez, 14, weep at his funeral after he was killed during a protest against President Nicolas Maduro's government in Caracas, May 4, 2019. Photograph: Ueslei Marcelino/Reuters

What are the chances of us getting to ever watch a star expand or implode?

For much of the second half of the century, up to 1980, Venezuela was the star of Latin America.

In the '70s, when other Latin American nations were crumbling under ruinous debt, as their currencies devalued and inflation soared, Venezuela managed to remain economically solvent and politically stable.

Not only was it a democracy in a continent plagued with coups and fallen governments, it had the highest standard of living among all Latin American nations.

For the first half of the 1900s, Venezuela had followed the Latin American model -- a primarily agrarian nation, with a land-owning economic and political elite.

In the 1950s, liquid gold was discovered under Lake Maracaibo. Venezuela's fortunes changed almost overnight -- as it discovered some of the world's largest oil reserves, and it charged ahead of the rest of Latin America. 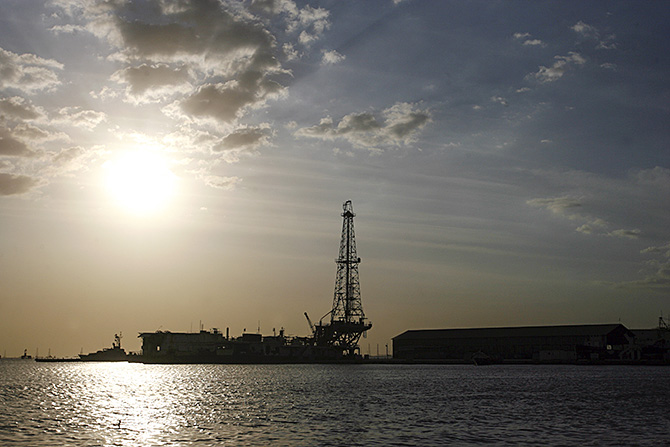 However, in 1978, in nearly 30 years, Venezuela remained heavily dependent on oil exports and imported nearly everything else.

Oil comprised an unholy 90 per cent of Venezuela's exports and more than half of its GDP.

In 1980, world oil prices were at an all-time high, cresting at $35 a barrel, Venezuela was raking it in and the evidence was all around.

The country bought almost everything with its revenue from petrol, including the steady hum of industrialisation that reverberated through the area where we lived -- in addition to the steel plant where my father worked, there was an aluminium plant and a major hydroelectric project, one of the world's largest; all funded by the oil being pumped daily from the rigs in Lake Maracaibo.

Most of it was managed with the help of international consultants like my dad, for whom Venezuela paid in dollars.

It was ironical, he would say, how foreign engineers like him were brought in to manage import substitution for this growing nation.

All these larger facts come into my rear view mirror, as I look back at the time, but my 11-year-old self could only revel, revel, revel, in the joys and excitement of living in this new country so different from India.

Coming abroad was not quite what I had imagined it to be.

For one, Venezuela was too hot, hotter than Jamshedpur with no winter to break the heat, while for me the idea of going abroad was inextricably linked to cold winters and snow, like in London or New York, places that were more popular as foreign destinations.

But much to my delight, I found that nearly every place was centrally air-conditioned, our home, the car, the stores, even my school, no small mercy this. In India, the privilege of air conditioning was rare then.

There were other delights too.

The large supermarkets and department stores, and the endless shopping possibilities, fascinated me.

The shelves of the supermarkets stocked with an unimaginably rich variety of products, from cheese to cereals to green Granny Smith apples, to the Coke and Fanta that we took home in large crates, a sharp contrast from the occasional bottle we got back home. By far, the greatest change was school. The American international school that I attended simply did not feel like one.

There were no uniforms. Oh, joy! I obsessed daily about what to wear, much to my mother's dismay. And, again to my mother's horror, there was barely any homework, or exams.

I was thrilled with my Spanish lessons, and in a few months, beat my dad who was still struggling and speaking with his hands. I started singing in Spanish and lost my heart to a succession of Latin crooners of the time.

Venezuela's wildly popular television programmes drew artists from all corners of the Latin American world and had the nation hooked every Saturday evening in a programme called Sabado Sensacional!

Latin American and Spanish artistes with their soft ballads and swinging salsas gave me a whole world of amor.

I held up hairbrushes to the mirror and sang my heart out on love and loss, while trying to swing my hips to beats like I saw Venezuelans everywhere do. 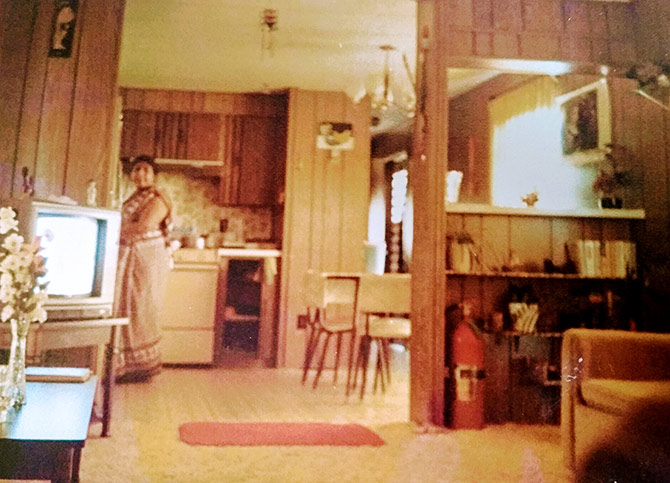 How the Venezuelans saw us, however, was a little different.

For a start, all Indians were called 'Hindus', as in Hindustani, but pronounced 'Indoos', the term Indio being reserved for indigenous native American tribes of the region.

For the most part, Venezuelans typically knew little about India, their imaginations mostly crowded with images of a mystic India of saints, elephants, snake charmers and rajas.

The mystic Indian reputation was quite potent.

Once, one of our Indian neighbours got bitten by a deadly local snake, the Mapanare, while depositing his trash at night. Luckily, not only did the gentleman survive the incident, but managed to drop the lid on the snake and crush it.

The next day, however, the local newspaper carried this cryptic headline, 'Snake bites Hindu, Snake dies'.

Even in more mundane instances, we were still exotic.

My mother, who only wore saris all her life, was often stopped in malls and parking lots, as curious women tried to figure out how exactly it was worn, once almost unravelling the whole thing in their enthusiasm. 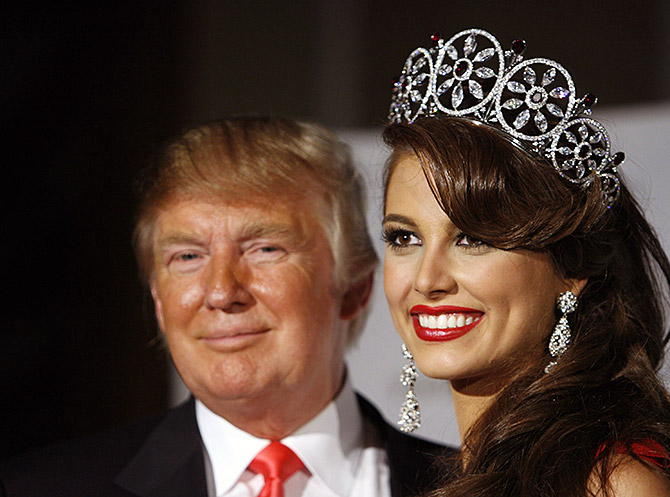 IMAGE: Miss Universe 2009 Stefania Fernandez of Venezuela smiles as she stands with then Miss Universe organisation owner Donald J Trump after winning the crown during the annual pageant at Atlantis on Paradise Island in the Bahamas, August 23, 2009. Photograph: Lucas Jackson/Reuters

After a year, we were back in Jamshepdur, but in 1982, to my great joy, I found myself in Venezuela again.

This time, my father had decided to leave for a longer time, and I was to stay there until my schooling was done.

We were back in Mapanare, the international colony. But I was enrolled in a different international school, with fewer Americans and more Latin Americans, and with far less air-conditioning -- a fact that was closer to the reality of the majority of Venezuelans removed from our privileged colony existence.

Life in Mapanare was simple and contained and, along with a small group of Indian friends, I made friends from Peru, Chile, Argentina, Honduras and, of course, Venezuela.

I began to appreciate the nuances of in their cultures, including the way they spoke Spanish; the Chileans and Argentineans with their Spanish lisp, the Mexicans and Venezuelans with their more rustic Castellano.

Venezuela too, had become famous by then, thanks to a most unusual feature -- it seemed to have a gift for producing beauty queens.

During the 1980s, Venezuelan beauties captivated international audiences in one pageant after another!

On holidays in India, I loved it when cousins and aunts called me Miss Venezuela.

But the Latin American star was falling. 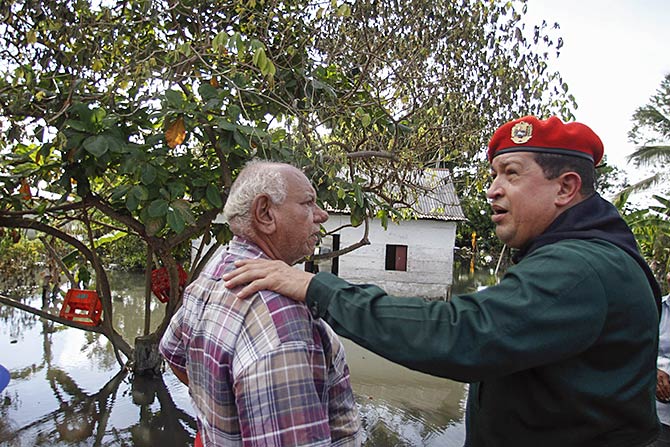 IMAGE: Venezuela's then president Hugo Chavez speaks with a flood victim during a visit to the flooded areas on the south side of Maracaibo's lake, December 8, 2010. Photograph: Miraflores Palace/Handout/Reuters

The Bolivar started on a perilous decline, going through catastrophic spirals of devaluation.

Black Friday, February 18, 1983, exploded over the Venezuelan economy, when the government was forced to devalue the currency by 100%.

And thus, from roughly 4 Bolivars to US$1 in 1980, the Bolivar began its long journey down, reaching 40 Bolivars to the US dollar, nine years later.

The devaluation led to stratospheric inflation in this import economy and began to inflict untold grief and hardships on the people; if foreigners like us were spared, it was because people like my father were paid partly or entirely in US dollars.

For locals, the pain was just beginning. 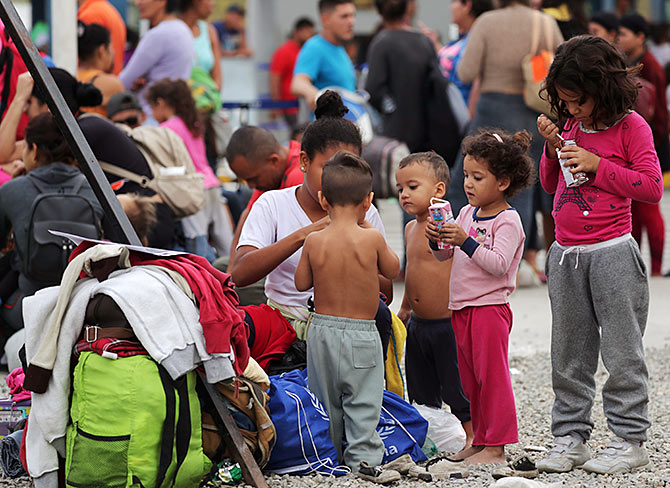 As savings began to evaporate, people queued in front of appliance stores with whatever they had to buy durable goods as the currency lost its value. And for the first time, food became unaffordable for many.

The fears and anxiety became palpable. Not unlike the news that filters out today, of food queues that start before daybreak and last until nightfall, zigzagging for miles, as hungry citizens wait on their assigned day for whatever the stores might offer.

But these wretched scenarios seem to be just a repeat of the economic unravelling that started in the 1980s.

Back then, my mother witnessed a disturbing event at a supermarket one afternoon.

After going through the aisles, she headed for the meat section. Ahead of her, was an American customer shopping for a large cut of meat.

A reasonably well dressed Venezuelan woman next to her kept pointing to various items, asking after the prices; shaking her head, getting visibly angrier by the minute, as she realised they were all out of reach for her.

Right then, the man behind the counter handed the American her large package of frozen meat.

But before she could put it in her cart, the local woman grabbed the frozen meat, flung it at her feet, and spat out the words, 'If we can't have it, neither can you!'

My mother, after witnessing this, left the store shaken.

While we were not as badly off as the locals, at home too, differences began to be felt.

I experienced the devaluation in my own little way, when the crisp green apples that my mother used to put in my snack box every day, disappeared from the shelves.

Venezuela could no longer afford to import these apples, along with much else, from the USA.

In school too, the meltdown began to show.

The country could no longer afford many of the international consultants it had hired. And so my school began to shrink, as some teachers and classmates said goodbye and returned to their countries.

Even among the 80 odd Indian consultants, the departures began.

A pall descended over our school and our little community. 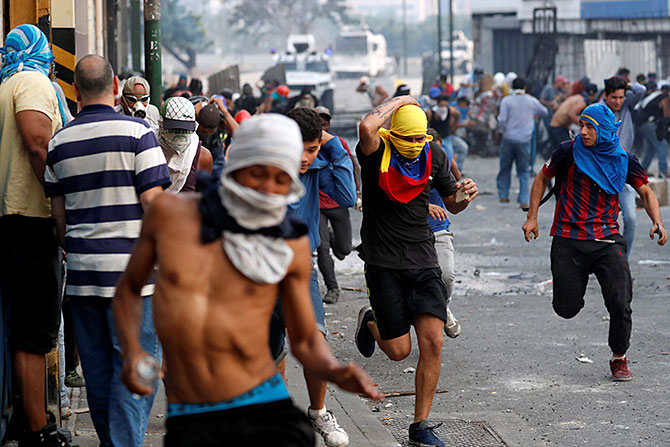 In this turbulent period, what the precipitous fall in the Bolivar really laid bare was the level of corruption and waste in Venezuela's government.

In 1982, as the currency tumbled, private banks were liquidated overnight and public officials were caught fleeing Venezuela with cash dollars in suitcases.

One particularly egregious scandal during this period involved the organisation that oversaw exchange rates.

Between 1983 and 1988, businessmen were found to have bribed its officials in return for access to half-priced United States dollars to funnel billions of dollars overseas. 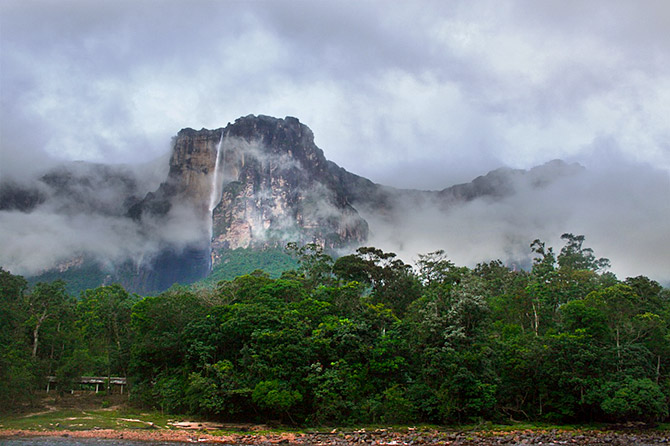 Although I am sure the situation must have caused my father some worry, life continued more or less normally for me, with school, friends and visits to India; and holidays in Venezuela to the Caribbean Coast, but most memorably, to Canaima, the site of the splendid Salto Angeles -- the Angel Falls, and the Ayauantepuy and Roraima, the cloud covered green mesas -- flat tabletop mountains that rose out of the wilderness.

Here, the Rio Negro, the black river, thick with oil and minerals, cascaded spectacularly towards the Amazon.

One indelible experience for me, was sitting under a thundering cascade in a lagoon in the middle of the river, with the water gushing over and around me as it sped downstream.