A Journey to Dominique Dada's Sunderbans

India is a passion with him. He is immersed in India. But he cannot help worrying about India too.
16 years ago, Payal Singh Mohanka accompanied Dominique Lapierre, who died on Monday aged 91, to the Sunderbans for an exclusive feature for Rediff.com. IMAGE: Thousands of villagers turn up to felicitate French author Dominique Lapierre and his wife as they disembark from a boat. All Photographs: Mukul Gangopadhyay

This feature was originally published on Rediff.com on February 22, 2006.

Drums, beating a rhythm of love and gratitude, greet French author Dominique Lapierre and his wife as they disembark from a boat and walk the narrow pathway that leads to Choto Sahera, an island village in the Sundarbans in the South 24 Parganas district of West Bengal.

Thousands of villagers have turned up to felicitate them.

Petals are showered on them. The smell of roses fills the air.

Banners greet them. They read: 'You are not for a day but for a life' and 'Lives begin with Dominique Dada and Didi.' For folks of this region, Lapierre is the messiah who has brought education and medical care to a remote corner of the state.

Lapierre -- whose The City of Joy has sold 9 million copies and his other books together have sold 40 million copies -- pours 80 per cent of his royalties into the Sundarbans region faithfully year after year.

The other 20 per cent, incidentally goes to Bhopal's gas tragedy victims ever since he wrote Five Past Midnight in Bhopal in memory of the casualties of that tragedy.

But for Lapierre it is not enough that he pours in more than Rs 140 million each year to projects in India.

He wants to be here too.

Lapierre visits India at least thrice a year. He has a strong urge to be in touch with the family he has adopted. He is supported in his efforts, for the last 40 years, by a wife, who in her words, "Shares everything with him including her first name!"

Clad in a denim jacket, trousers and a hat, to protect him from the strong sun, his bouyant humour and boundless energy belies his 75 years.

His wife Dominique Conchon-Lapierre says, "He has been gifted with energy and enthusiasm by the creator. What is nice is how he can give that energy to others. The love that we receive refills our energy."

Overwhelmed by the smiles on the faces of the thousands who have gathered to hear his address in Choto Sahera, he says "I am sure in a previous life I was an inhabitant of the Sundarbans. Mahatma Gandhi would say the world is my village. Today Choto Sahera is for us the world." IMAGE: The Lapierres are greeted in the Sundarbans.

Lapierre talks passionately about the need for education. Only education can change the future of this isolated area he feels.

Almost 20 years ago, Lapierre was approached by an NGO, the Southern Health Improvement Samity, which was looking for help for underprivileged rural areas in this forgotten region of the country. The proposal struck a chord. Lapierre committed himself.

Sundarbans, a world heritage site, is known for its dense mangrove forests and for being one of the last habitats of the elusive royal Bengal tiger. But the enchanting mystique of these remote jungles cloaked a sad reality. Lapierre discovered that its inhabitants were badly plagued by tuberculosis. Being somewhat inaccessible, it was partially neglected by the state administration.

Lapierre was determined to provide a measure of relief for those suffering from this disease. He set up a TB centre here. According to the law, a TB hospital is entitled to receive medicines from the government but initially he barely received 15 percent of the quota. Lapierre went to the press, made a noise and eventually emerged victorious. The centre now receives medicines from the government.

His centre's administrative abilities have inspired government officials to visit to take a close look at its functioning. "We can all do something to make things better," he adds. IMAGE: A boat welcomes the Lapierres .

On his trips to India he visited the 54 inhabited islands of the Sundarbans and he got a feel of the needs of the villagers. He began by providing a boat to them.

Gradually he donated a second, a third and finally a fourth. These boats are a lifeline for inhabitants because they bring teams of medical specialists into the region.

Lapierre takes a personal interest in the TB centre. In the last decade almost one million TB patients have been treated. But he feels educating patients is as important as providing medical aid.

He recounts cases of patients who felt better after three days of medication and then went ahead and sold the rest of their medicines. As a result numerous cases of relapses were reported. Now a team educates them on the importance of continuing the medication for a period of six months.

There are other projects he nurtures around here. Medical schemes and empowerment progammes have been initiated for inhabitants of the area. The eye hospital conducts almost 30 cataract operations a day, five days a week. The centre has a micro-credit programme offering loans to non-earning women members of the family. A laboratory to detect arsenic in water, a major hazard in this region, has also been set up.

His love for India is evident in every story he narrates: There was a time he helped a village to grow cauliflower. The joyous villagers gifted him their first cauliflower. Touched by their love, he still has it preserved in a glass case in his home in Paris! For him it is not just a vegetable but a precious gift steeped in love. 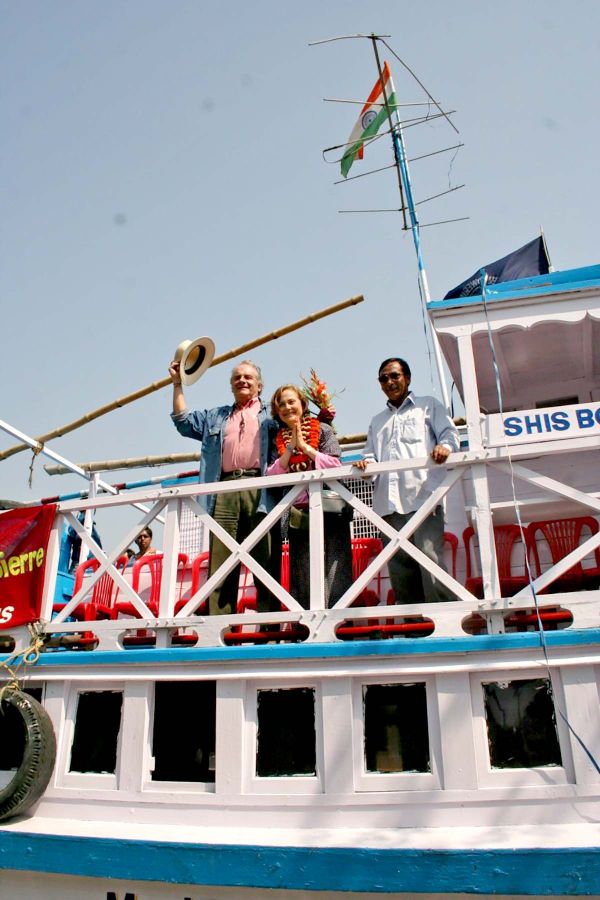 IMAGE: The Lapierres show their gratitude to the villagers.

The French author first came to India on his honeymoon. And he fell in love with the country. He returned in 1971 and spent three years in India doing research for Freedom at Midnight.

The book was an international success. Lapierre returned to express gratitude to India for its hospitality. "Gandhiji had a great deal of compassion for lepers, I wanted to set up a home for leprosy victims." This was how he got involved with Udayan: The Resurrection in Barrackpore, near Calcutta.

For Lapierre it has been a long journey not without its obstacles. When we reach Bhangar, now the hub of his operations in the Sundarbans, he recollects his fight for electricity. He wanted to install an X-ray machine but there was no electricity.

He and his team threatened to go on hunger strike. In a bid to appease them the government installed the electrical boards. Their protests continued. Gradually the lines were fitted. And days later electricity finally flowed through.

By the time the X-ray machine began operation, Lapierre had returned to Paris. One evening he received a courier with the first X-ray. On it was the logo of the Southern Health Improvement Samity, the NGO he was supporting. Two Muslim hands and two Hindu hands holding each other in a bond of love. A touching gesture from a country which has seen the ugly face of commualism.

Braving the heat and dust, 15 friends from France, Spain and Italy accompany him on this trip to get a first-hand feel of the work he passionately talks about each time he returns from India.

They talk of his infectious enthusiasm and love for India. "It was impossible to not follow him here!" says Florence Decoster from France.

He is secretive about his next literary work, but hints about extraordinary lives. One cannot help marvelling at his far from ordinary existence.

India is a passion with him. He is immersed in India. But he cannot help worrying about India too. He laments the widening economic gap. Lapierre echoes the words of Nobel Laureate Amartya Sen -- as one part of India becomes California, the vast majority is sub-Saharan Africa.

If this gap is not bridged, he cautions, there will be a revolution.

As the boat pulls away, the sun sinks into the Hooghly, illuminating the waves with a golden sparkle. Lapierre's face has a quiet sense of fulfillment.

Maybe it is the joy of lighting up lives. And leaving in his wake a radiant glow. 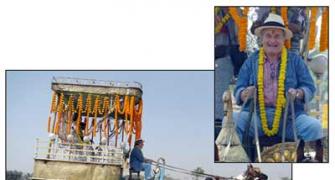 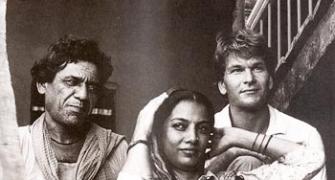 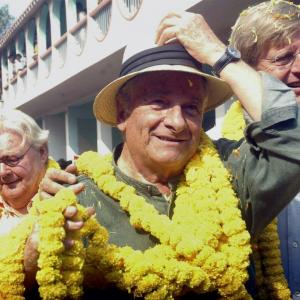