News
Business
Movies
Sports
Cricket
Get Ahead
Money Tips
Shopping
Sign in  |  Create a Rediffmail account
Rediff.com  » News » What went on inside Bengal's house of terror?

Rediff.com's Indrani Roy digs up chilling details of the ongoing investigation into the Bardhaman blast case, which has exposed the militant network that had been operating in West Bengal since many years. 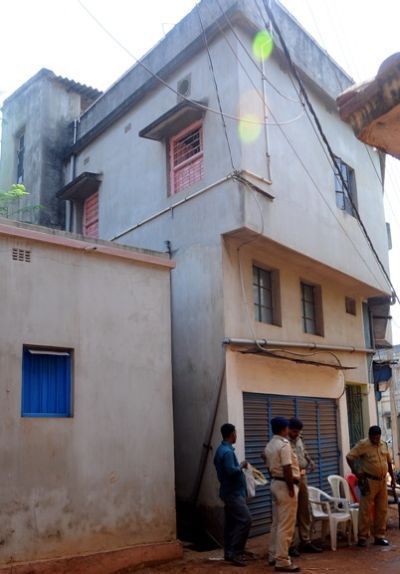 Image: The two-storey house at Khagragarh where the militants had been staying on rent.

Till recently, Khagragarh used to be a nondescript point on the map of West Bengal. Not anymore.

As thousands thronged Puja pandals in Kolkata on October 2 to offer prayers to Goddess Durga on Ashtami, the second and most auspicious day of the festival, a powerful explosion rocked a house located in not-so-far-away Bardhaman town’s semi-urban colony of Khagragarh.

The large number of watch dials, SIM cards and other tools required to make improvised explosive devices seized by police from the house indicated that it was no ordinary explosion caused by cooking gas leak nor were the occupants of the house common folk as believed but militants.

In fact, the explosion blew the lid off a terror network that has been thriving in the state for years -- some of the SIM cards recovered from the blast site were more than five years old.

The National Investigation Agency, which was handed over the probe on Friday over the head of a reluctant state government, has been coordinating with the state police and the criminal investigation department to get to the bottom of the case.

On Friday, the CID came up with shocking revelation that the militants had chalked out a plan to set off serial blasts in Kolkata and parts of West Bengal during Durga Puja and Bakri Id.

“They had visited the city many times and shortlisted some pandals and shopping malls as targets,” sources told Rediff.com.

A large number of bombs, explosives, IEDs, fake voter identity cards and Aadhar cards were seized from the site of the explosion along with pamphlets and leaflets propagating the ideology of Al Qaeda and even Chechen rebels, senior police officers involved with the case told Rediff.com.

While one of the militants, Shakil Ahmed, was killed on the spot, his associate Sovan Mandal died at the Burdwan Medical College and Hospital a few hours later. Shakil hailed from Nadia and Sovan was from East Medinipore.

An injured Abdul Hakim alias Hasan, who hails from Lalgola in Murshidabad district, was admitted to the same hospital in a serious condition, and was shifted to Kolkata’s SSKM Hospital on Friday.

Shakil's wife Gulshana Bibi alias Rumi and Hasan’s wife Alima alias Amina Bibi, who were in the house at the time of the explosion, were arrested and are being interrogated.

According to insiders in the state CID, cadres of the terror outfit Jamat-ul-Mujahideen Bangladesh, a wing of the Harkat-ul Jihadi Islami-Bangladesh, were involved in the Bardhaman blast.

Other agencies probing the case claim to have found evidence that the banned Students Islamic Movement of India assisted the Khagragarh terror module with logistics and recruitment.

The two women arrested by the police apparently received training at a madrasa located at Simulia in Bardhaman under the aegis of some prominent JMB activists.

The house that was the militants’ den

Hasan Chowdhury, owner of the two-storey house at Khagragarh, is a retired government servant. One of his sons is a homoeopathic doctor and has a chamber on the ground floor of the same house, while Chowdhury lives next door.

Though Chowdhury refused to speak to Rediff.com despite repeated attempts, one of his kin said in private: “Chowdhury saheb had let out the first floor to Shakil for a monthly rent of Rs 4,700 on the request of a family friend.”

This was corroborated by Abdul Gaffar, inspector-in-charge, Bardhaman police station.

“Though he claims to be getting Rs 4,700 as rent, we believe the rent was much higher,” the officer told Rediff.com, “We have been questioning Chowdhury for the past few days to find out if he had any connection with the tenants. Since we seized a number of fake IDs from the blast site, we need to investigate if he had verified his tenants’ antecedents.”

Why the militants chose this house

Investigators are of the opinion that the militants chose Chowdhury’s house because of its vantage location.

“The house has three exits -- one to the highway leading to Birbhum, the other towards Bankura, and third that leads to Lalgola in Murshidabad, close to the Bangladesh border,” a source in the CID told Rediff.com.

“Moreover, Chowdhury has friends in high places and is a man of repute. The militants thought that if they stayed in his place, they will be above suspicion.” Shakil and Hasan claimed to be burqa makers

Both Shakil and Hasan ran a burqa-making unit from their rented place.

Their wives never socialised with the neighbours and even preferred to go out of town to buy provisions.

“Though they came here a few months back, we have never seen their face. The women were always in burqa,” Rajani Khatun, a college student and Shakil’s next-door neighbour, told Rediff.com.

“Their body language was mysterious. They never smiled or looked at us,” Rajani said.

A rather populous area otherwise, the lane leading to Chowdhury’s house wore a deserted look when Rediff.com visited the place on Friday. Three policemen stood guarding the main entrance to the house; its doors and windows were shut and repeated knocks elicited no response even though one could hear television sounds and muffled voices inside.

‘The arrested women are jihadi to the core’

According to the investigators, the wives of Shakil and Hasan are also well-trained militants.

“They are skilled shooters, can make and hurl bombs and are equipped to indoctrinate others,” claimed a source in the CID to Rediff.com.

“Both the women are tough nuts to crack and seem totally unfazed by the explosion,” he added. Both women have a child each but they come across as “indifferent mothers”.

The inspector in-charge of Bardhaman police station seconded the CID’s version during his interaction with Rediff.com.

“No one can make out from Shakil’s wife Gulshana Bibi’s expressions that she has lost her husband. Playing with death to them is as easy as feeding their child,” he added.

‘Blood was streaming out of the pipes’

Initially, when the explosion went off, the residents of the area thought a gas cylinder had burst.

“It was 11.45 am. I was at my tea stall when I heard a deafening sound,” local tea-stall owner Mita Mal told Rediff.com.

“We rushed out and saw one of the women at the window. She said a cylinder had burst but there was nothing to worry. But people who had gathered saw blood streaming out of the pipes. That is when they decided to call the police.”

“The woman, however, kept insisting that her husband was scaling and cooking a big fish and chicken for lunch and that the blood was from the meat,” Mal said.

When the police arrived, the wives of Shakil and Hasan resisted their entry and even allegedly threatened to open fire at them.

“The police broke in to find two men lying in a pool of blood and the women meticulously washing away the blood with water,” the tea-stall owner added.

Shakil, according to the investigators, was one of the skilled IED makers for the militants. Image: Tea-stall owner Mita Mal says the women tried their best to eliminate traces of the blast before the police moved in.

Following the interrogation of Shakil's wife Gulshana Bibi, the investigators have zeroed in on one Kausar who, they believe, was the kingpin behind the group and who also acted as a courier for Shakil.

The police are also looking for three other associates of Kausar -- Naseerullah, Saqib and Sajeed.

According to the CID, Kausar and Naseerullah carried the IEDs that Shakil made for Saqib, a resident of Beldanga in Murshidabad.

From Beldanga another trusted man, Sajeed, would transfer the devices to Lalgola, also in Murshidabad, bordering Bangladesh.

From here, the devices were smuggled into Chittagong in Bangladesh via Rajshahi and Satksheera, according to the investigators.

According to investigators, the militants culled raw materials through illegal channels from mines in and around Bardhaman district as also from Kolkata.

Money reached them through hawala channels from Bangladesh as well as from some countries in West Asia, sources told Rediff.com.

Shakil prepared IEDs on specific demand from across the border.

Sometimes orders would also come from Assam and other north-eastern states, the sources added.

A few people arrested on Friday from Assam’s Barpeta district are suspected to be involved with the Bardhaman case, an agency report said on Saturday.

An Assam police spokesman claimed that one of the arrested, Shaikhul Islam alias Abdulla, is an important member of a JMB module operating in Assam and was an associate of Shakil.

Kausar, like Shakil, used the ‘couple module’ and took a house on rent in Bardhaman’s Baburbagh for about six months from one Haji Abdul Razzak, a highly respected man in the locality, to ward off any suspicion about them.

Kausar lived with his ‘wife’ and a married friend. “The women were in burqas,” he said.

They occupied three rooms on the first floor and the ground floor was rented out to a few undergraduate students.

“Earlier, these students used to socialise with mama’s former tenants but ever since these people moved in, they were barred from going upstairs,” Habibur said.

“They did not like us going to the terrace to hang the clothes out to dry,” he said, as their wives were too conservative.

“Kausar and his 'friend' claimed to be suppliers of surgical materials to hospitals and would always be seen moving around with heavy rucksacks,” Habibur added.

“Soon after the explosion occurred, around 12.30 pm, the couples absconded but to hoodwink us, they left the main gate unlocked and the fans in their rooms switched on.”

The owner of the house Haji Abdul Razzak has been picked up by the police for interrogation. ‘The state government is responsible’

“If there were terror modules in such close proximity to the police station and the police were clueless, we have to assume that intelligence agencies in the state have failed to perform their duty,” he told Rediff.com.

"However, it may also be the case that the police knew about the terrorists’ hideouts and had informed those in power but the latter chose to keep mum for political interests. Whatever may be the case, the state government cannot pass the buck,” Islam said.

The Bangladesh government has sounded a high alert following the Bardhaman blast.

Its Prime Minister Sheikh Hasina has asked the national security intelligence to prepare a comprehensive report on the Jamaat’s involvement in the incident.

The two countries are expected to discuss the issue during the next round of diplomatic talks.

Top Image: The two-storey house at Khagragarh where militants had been staying on rent. Below: A sketch of Kausar, the alleged kingpin. Photographs: Dipak Chakraborty 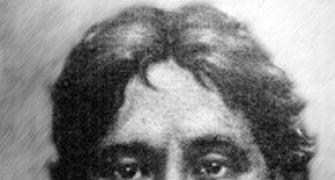 Are Trinamool MPs harbouring Bangladeshi terrorists in WB?
How influx of migrants, terror is interlinked 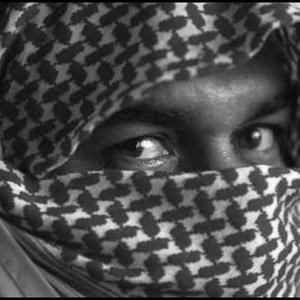 MUST READ: The terror transporters of India