By Renu Mittal
January 19, 2013 22:19 IST
The Congress Working Committee anointed Rahul Gandhi as party vice-president at the party's Chintan Shivir in Jaipur on Saturday. He is now the official number two in the Congress, paving the way for his projection as the party's prime ministerial candidate in the run up to the 2014 general elections.

Late Saturday evening, senior leader and Defence Minister A K Antony said before the CWC meet that he wanted to move a resolution. He said that for long there has been speculation and demands from Congress leaders as well as within the media for a bigger role for Rahul Gandhi.

Politically it would also change equations within the Congress at the highest level as a more assertive Rahul would take key decisions, which were hitherto the forte of the powerful group around party president Sonia Gandhi. One of the most direct beneficiaries of this elevation is likely to be Digvijaya Singh, who is known to have an easy and comfortable working relationship with Rahul Gandhi.

This would be immediately visible in the upcoming All India Congress Committee reshuffle where the Rahul imprint is likely to be visible as well as in state Pradesh Congress Committees and changes in some chief ministers.

Sources say that there was a proposal before the Congress president to make him the working president of the party. But that by implication would have meant that Sonia Gandhi was on the verge of retirement with the power centre in the Congress moving towards Rahul Gandhi.

It is learnt that some leaders, who are powerful in the current dispensation, advised Sonia Gandhi to move slowly and not upset the applecart immediately as it could create problems within the Congress.

It is learnt that just before the CWC meeting began, Prime Minister Dr Manmohan Singh, Sonia Gandhi and Rahul Gandhi met separately as members of the extended CWC waited in another room. A little while before that Rahul had called the Youth Congress and National Students' Union of India delegates for discussions.

The decision taken by the CWC would be endorsed and ratified by the AICC meeting on Sunday in Jaipur. AICC members from all over the country have gathered in the pink city for the AICC session, where the atmosphere is likely to be lively and enthusiastic after the decision to formally anoint Rahul Gandhi the number two in the party.

Rahul is the third vice-president of the Congress. The first was Arjun Singh who was appointed by Rahul's father Rajiv Gandhi, followed by Jitendra Prasada, who was made the vice-president by the then Congress president Sitaram Kesri.

The decision to appoint Rahul has ended months of speculation and media hype. The party officially made it clear that he is the number two and does not need any position to prove that. But still speculation continued fuelled by the illness of Sonia Gandhi, who is believed to have been keen that Rahul share her responsibilities and take a more active and commanding role in the decision-making process of the Congress.

While the 43-year-old Rahul Gandhi stepped into politics in 2004 as a MP, there has been intense speculation over his role and when he would take over the reigns of the party. His elevation was inevitable and has come at a time when the party is fine-tuning its strategy for the upcoming assembly and Lok Sabha elections.

The last two days of discussion and deliberation when emphasis has been on youth leaders and the need to reconnect with vast sections of the younger population, there were growing demands within the party to give Rahul a broader role rather than just his limited role with the Youth Congress and the NSUI.

His work with the youngsters led to the youth brigade being given prominent space in the party as in the last cabinet reshuffle a number of young MPs were given charge of key portfolios.

The party shift towards the youth has been a deliberate and well-crafted act to give Rahul the required comfort level in the run up the elections. 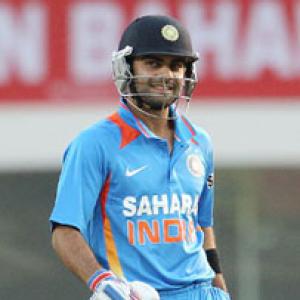 Stats: Kohli has completed his 22nd fifty in ODIs