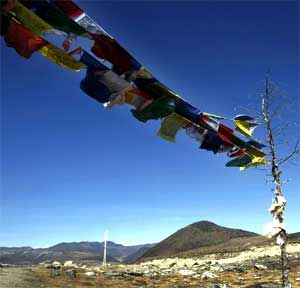 On the title page of the Top Secret Report, Henderson-Brooks quotes the Chinese tactician Sun Tzu: 'Know yourself, know your enemy: A hundred battles, a hundred victories', says Claude Arpi, highlighting where the Indian Army and government failed to counter the Chinese attack in 1962.

It was probably late 1963. A senior Indian Army officer, just released from a Prisoner of War camp in Tibet where he had spent seven months in dreadful conditions, had gone to the Grindlays Bank in Connaught Place in New Delhi.

As he entered the bank, he saw a familiar figure at one of the counters. He had served under this person before being taken prisoner to Tibet by the People's Liberation Army of China.

The officer was one of hundreds of ill-fated jawans and officers caught by the Chinese at the front, near the Namkha Chu (river) in the Tawang sector of West Kameng Frontier Division (today the Tawang district of Arunachal Pradesh).

Hundreds of others were even less lucky; they never returned from West Kameng.

The officer went to the familiar figure and saluted him: 'Good morning, Sir.'

The person stood still, staring at him, silent. After what seemed to be a very long time, the officer asked the familiar figure: 'Anything wrong, Sir? Are you not keeping well?' He added: 'Do you recognise me, Sir?'

The person started crying and said: 'Of course I recognise you, how could I not, but you are the first officer who has been fit to salute me after such a long time.'

The person was Lieutenant General B M Kaul, Jawaharlal Nehru's blue-eyed boy, the Commander of the 4 Corps.

For many, he was the chief villain of the 1962 debacle against Mao's troops.

The officer who greeted him had served under General Kaul in the 4 Infantry Division (of 4 Corps).

This story came back to my mind, when I read the now declassified report of the 1962 war prepared by Lieutenant General Henderson-Brooks and Brigadier Prem Bhagat.

General Kaul, who was Chief of General Staff at Army Headquarters, before taking command of the 4 Corps, is one of the main persons indicted by the Henderson-Brooks Inquiry Commission, as we shall see in the excerpts published below.

But Nehru, who had promoted Kaul to positions that the general was unable to assume, was the real guilty man. His name is not mentioned in the Henderson-Brooks report, as the terms of reference of the Commission were limited to military operations.

I am posting here the 'conclusions' of the operations in the Western Sector (Ladakh) and the lack of preparedness of the Indian Army. The 'Headquarters' (meaning, Nehru, V K Krishna Menon, the defence minister, General Thapar, the army chief, and General Kaul, amongst others) had tried to bite more than they could swallow.

Time and again, the myth that 'The Chinese will not attack' was reiterated.

The intelligence agencies (under B M Mullick) are definitively to blame.

The 'Chinese will not attack' mantra was still being recited on the morning of October 20, 1962, when thousands of Chinese descended the slopes of Thagla ridge and surrounded the Indian troops.

On the title page of the Top Secret Report, Henderson-Brooks quotes the Chinese tactician Sun Tzu: 'Know yourself, know your enemy: A hundred battles, a hundred victories'.

In the paragraphs below from the Henderson-Brooks report, I try and understand why General Kaul was crying in Delhi that day. The comments in brackets are mine.

1. This Review of the Western Command was undertaken as the 'Forward Policy' was primarily introduced to baulk the Chinese claims in Ladakh. Had the developments stemming out of it been correctly apprised by the General Staff (Lt Gen B M Kaul) at Army Headquarters and correlated to NEFA (North East Frontier Agency); it is possible that we would not have precipitated matters till we were better prepared in both theatres.

2. As it was, we acted on a militarily unsound basis of not relying on our own strength but rather on believed lack of reaction from the Chinese. We forgot the age old dictum of the 'Art of War' summed up so aptly by Field Marshal Lord Roberts.

'The art of war teaches us to rely not on the likelihood of the enemy not coming, but on our own readiness to receive him; not on the chance of his not attacking, but rather on the fact that we have made our position unassailable'.

3. Militarily, it is unthinkable that the General Staff did not advise the government on our weakness and inability to implement the 'Forward Policy'. General Kaul in his report (Appendix paras 65-69) has brought out that, on a number of occasions in 1961-62, the government were advised of our deficiencies in equipment, manpower, and logistic support, which would seriously prejudice our position in the event of a Chinese attack on us.

The fact, however, remains that orders were given by the General Staff in December 1961 for the implementation of the 'Forward Policy' without the prerequisite of 'Major Bases' for restoring a military situation, as laid down by government.

Indeed General Kaul as CGS and the DMO (Directorate of Military Operations), time and again, ordered in furtherance of the 'Forward Policy' the establishment of individual posts, overruling protests made by Western Command.

4. There have been pressure put on by the Defence Ministry (V K Krishna Menon and probably Nehru), but it was the duty of the General Staff to have pointed out the unsoundness of the 'Forward Policy' without the means to implement it.

This was brought out very forcibly by GOC-in-C (Army Commander) Western Command in his letter of August 17, 1962 (Annexure 21). Apparently, however, the General Staff at no stage submitted to the government an appraisal on the consequences of the 'Forward Policy' or the basic requirement of troops and resources required before it should have been implemented.

5. General Kaul in his report goes on to state that in a number of meetings held by the defence minister and attended by COAS (Chief of Army Staff. General P N Thapar), himself as CGS, DIB (Director Intelligence Bureau, B N Mullick) and representatives of defence, external affairs, and home ministries, the general view was that the Chinese would not provoke a show-down.(Appendix para 70).

This is strange, because military action emerges from both political and military appreciations. It was clear from 1960 onwards that China had greatly increased her forces in Tibet.

A strength far greater than that required for defence of quelling of the Tibetan uprising. This was brought out in October 1960 in the Military intelligence Review 1959-1960.

6. To base military actions and place in jeopardy the security of troops on suppositions and beliefs put across at conference tables indicates either acceptance of the belief or a militarily immature mind.

The General Staff, particularly the CGS, Deputy CGS, and the DMO went a step further and permeated this belief into the army, with the disastrous result that even field formations were infected with a sense of complacency.

This stemmed from the fact that after 1960 planning and detailed staff work be essential for 'Higher Direction of War' was never seriously undertaken (that is the tragedy).

7. Where there are so many intangibles, as in war, it is essential that all facets of a problem are thoroughly examined before a course of action is determined. The higher the level the greater the necessity for a thorough examination.

This process of higher levels must be carried out in writing as the wide range of examination cannot obviously be covered mentally or verbally.

Thus, in modern times, staff has increased as the complexities of war increased, and a system of staff duties have evolved which ensures a thorough appraisal and systematic planning before a course of action is adopted.

8. The detailed staff work that was carried out before the Normandy Operations is common knowledge. Our staff at Army Headquarters is patterned on the War Office in the United Kingdom. Our General Staff with its Operations, Intelligence, and Staff Duties Directorates is designed for such detailed staff work.

9. In fact, till 1960 one can see systematic planning being carried out at all levels. Intelligence and operational appreciations were made and plans evolved, in which the tasks laid down were compatible with the resources available.

The plans were then tried out through war games and it was hoped that the flaws discovered would be put right.

This as has been seen was not done. In 1961-62, major developments took place that required fresh appraisal at each state. These were as under:

(a) The Chinese build up in Tibet by end of 1960 had substantially increased and was brought out in the Military Intelligence Review 1959-60. This required a fresh reappraisal of our forces and tasks.

(b) The introduction of the 'Forward Policy' end of 1961. Before its introduction it was essential that an appreciation should have been prepared, bringing out the requirements of troops and resources and also possible Chinese reactions.

(c) The incidents in August/September 1962 including the surrounding of the Galwan Post in Ladakh and the Dhola in NEFA showed clearly the mounting tension and a possibility of an armed clash.

The Western Command had brought out in August 1962 in no uncertain manner the dangerous situation that had developed. This again required a fresh appraisal for the steps to be taken to meet the overall situation.

(d) At the outbreak of hostilities if a coordinated plan had been made to meet the Chinese offensive our troops would perhaps have been more balanced and there would not have been any question of plugging holes at the last moment.

10. It is apparent that none of this planning took place and no operation orders or instructions were issued by the General Staff. It was therefore not possible for Command or lower formations to issue any comprehensive order without a directive from the General Staff.

All that could be done by Western Command to meet the situation, when the hostilities broke out, was done. Troops and equipment were depleted from formations facing Pakistan to reinforce Ladakh.

11. This lapse in Staff Duties on the part of the Chief of General Staff (Lt Gen B M Kaul), his deputy, the DMO, DMI, and other Staff Directors is inexcusable.

From this stemmed the unpreparedness and the unbalance of forces. These appointments in General Staff are key appointments and officers were hand-picked by General Kaul to fill them.

There was therefore no question of any clash of personalities. General Staff appointments are stepping stones to high command and correspondingly carry heavy responsibility.

When, however, these appointments are looked upon as adjuncts to a successful career and (if) the responsibility is not taken seriously, the results, as is only too clear, are disastrous.

This should never be allowed to be repeated and the staff as of old must be made to bear the consequences for their lapses and mistakes.

Comparatively the mistakes and lapses of the staff sitting in Delhi without the stress and strain of the battle are more heinous than the errors made by commanders in the field of the battle.

12. The unmilitary poise of our forces in Ladakh has already been too clearly brought out and needs no further elaboration.

Claude Arpi
Related News: M Kaul, Henderson-Brooks, CGS, General Staff, North East Frontier Agency
Print this article
The 1962 war -- Where did India go wrong?
Why we must acknowledge the blunders of the 1962 war 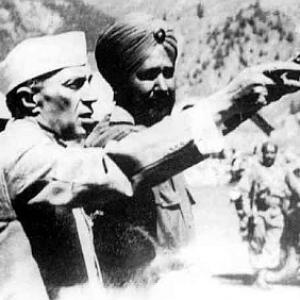