Cyberspace is a battleground as important as the traditional domains of air, land, sea and space, says US Defence Secretary Ash Carter, who visits India next week.
Ajai Shukla reports from Philadelphia. 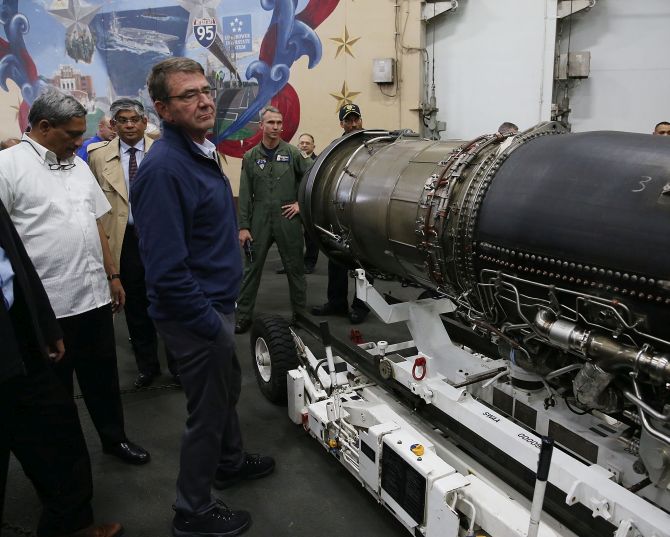 Just before a three-day visit to India that starts in Goa on Monday, US Defence Secretary Ashton Carter has initiated far-reaching changes in America's military command structures to ensure it remains a globally effective force.

Unlike India, where a proposal for a tri-service chief of defence staff (CDS) remains on the back burner and military command structures almost never feature in top-level discussions, Carter has ensured attention from President Barack Obama himself.

Obama spent Tuesday afternoon in discussions with Carter's military team -- including Chairman of the Joint Chiefs of Staff (CJCS) General Joseph Dunford, top US combatant commanders from across the world, and senior Department of Defence (DoD, or Pentagon) officials. Their discussions of threats, strategies and budgets continued over dinner.

Just before that presidential meeting, Carter, speaking at a Washington DC think-tank, the Centre for Strategic and International Studies, publicly outlined his proposed changes to the 30-year-old Goldwater-Nichols Act of 1986, which mandates America's current military structure. The United States Congress will be required to approve these changes before they are implemented.

Carter indicated the cyber command would become a full-fledged combatant command; rejected a proposal to reduce the number of combatant commands; and ruled that America's nine combatant commanders (COCOMs) would continue to report directly to the defence secretary and the president.

The Goldwater-Nichols Act distributes US combat units worldwide between nine combatant commands, each commanded by a COCOM -- a four-star general with a mix of army, navy, air force and marine corps units under his command.

Goldwater-Nichols places COCOMs directly under the defence secretary. The CJCS remains outside the operational command chain, functioning as an independent military advisor to the defence secretary and president, advising on overarching issues of global force deployment, roles and long-range planning.

India's military structure has far less inter-service coordination. Except for the small Andaman and Nicobar Command (ANC), there is no joint service command. Instead, 17 separate army, navy and air force theatre commanders (India has no marine corps) report to their respective service chiefs.

In the absence of a tri-service chief, each service chief functions in his own silo. A three-star chief of integrated defence staff provides the facade of jointmanship, but he is largely powerless before the three service chiefs.

Interestingly, India, which lies within the area of responsibility of USPACOM, has asked the Pentagon for formal linkages with USCENTCOM, which is associated with areas to the west of India, including Pakistan, Afghanistan, Iran and West Asia. It is possible that the USPACOM headquarters in Hawaii, and also the USCENTCOM headquarters at Tampa, Florida, might each have an Indian liaison officer posted.

Carter's most far-reaching proposal is to make the Cyber Command a full-fledged combatant command.

Pointing out that cyberspace was a battleground as important as the traditional domains of air, land, sea and space, he said: 'That is why our budget increases cyber investments to a total of $35 billion over five years, and why we should consider changes to cyber's role in (the Pentagon's Unified Command Plan).'

Next, Carter nixed the long-standing proposal to reduce the number of geographical commands by merging North and South America into a single entity; and, similarly, place Europe and Africa under a single command. Experts had wanted this in order to reduce senior management personnel by 25 per cent.

Carter, however, has pointed out that geographically distinct commands served a purpose -- to cater for 'their distinct areas of emphasis.' Instead, savings could be made 'by integrating functions like logistics and intelligence and plans across the joint staff, the combatant commands and subordinate commands.'

Next, Carter rejected a proposal for COCOMs to report to the CJCS, rather than to the president and the defence secretary. Explaining this, he stated: 'In today's complex world we need someone in uniform who can (advise the defence secretary).... about to where to allocate forces throughout the world and where to apportion risk to achieve maximum benefit for our nation. And the person best postured to do that is the Chairman of the Joint Chiefs of Staff.'

In February, Carter had issued the 2017 Defence Posture Statement, which identified five evolving challenges for the US. Two related to great power competition and 'full-spectrum warfighting.'

The first was the evolving challenge that Russia again poses in Europe, after a quarter of a century; and, second, the aggressive rise of China in the Asia-Pacific.

The Russian threat remains subordinate to that of China, with the Defence Posture Statement explicitly stating that Obama's 2012 rebalance to Asia will continue, 'to maintain the regional stability we've underwritten for the past 70 years... in this, the single most consequential region for America's future.'

The other three challenges include deterring North Korea by placing US forces in the Korean peninsula; deterring Iranian aggression against US allies, especially Israel; and to counter terrorism, especially the rise of ISIL.

Underlining the shift from the counter-terror and counter-insurgency operations that tied down the US in Iraq and Afghanistan for fifteen years, the Defence Posture Statement notes: 'We will be prepared for a high-end enemy... what we call full-spectrum. In our budget, our plans, our capabilities, and our actions, we must demonstrate to potential foes that if they start a war, we are able to win, on our terms.' 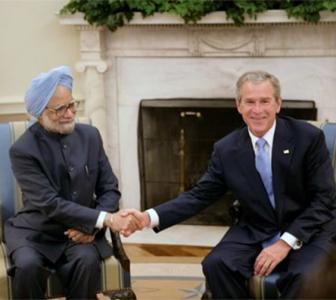 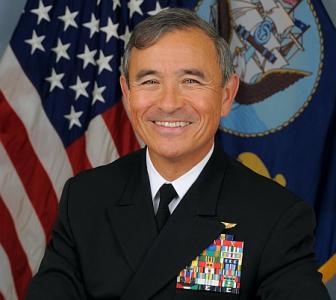 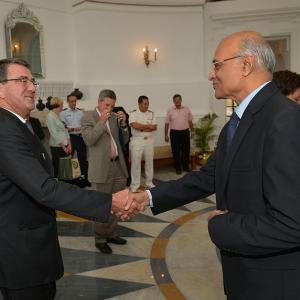