Historian Mridula Mukherjee narrates how the Quit India movement swept across the country even in the absence of its leaders, convincing the British that they could no longer continue to rule India. 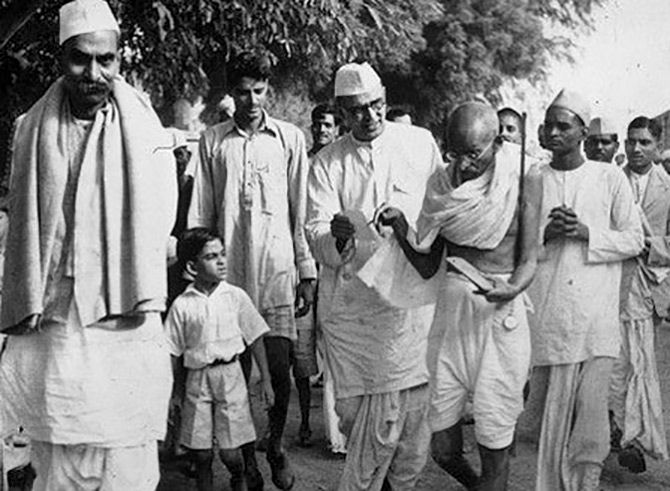 The city awoke to news of the arrests of the entire Congress leadership.

People in their hundreds of thousands rushed to Gowalia Tank (now August Kranti Maidan) where, a day earlier, Gandhiji had made his famous 'Do or Die' speech in an open session of the All India Congress Committee, and where a big public meeting was scheduled. The angry crowd clashed with the authorities.

The last big battle for India's freedom from colonial rule had begun.

It was a battle that took many forms, ranging from non-violent mass satyagrahas, mammoth public meetings, huge protest rallies in cities and towns to underground organisation of sabotage of communication and transport networks, an underground radio, illegal patrikas (newsletters) and the formation of parallel governments in Ballia, Midnapore and Satara.

Why did the Congress, and particularly Gandhiji, reach the conclusion in mid-1942 that a movement against the British had become necessary?

In 1939, when the British had declared that India was a party to the war (World War II), the Congress criticised the decision as having been taken without Indian consent. Provincial Congress ministries resigned in protest.

However, despite this, it expressed its strong sympathy with the anti-fascist aims of the Allied powers, including Britain, and had refrained from obstructing the war effort.

As late as March 1942, it was willing to negotiate with the Cripps Mission, sent by the British cabinet, to work out a settlement for Congress cooperation in the war effort in exchange for promises of constitutional advance after the end of the war.

Further, the Japanese had advanced very rapidly since their attack on Pearl Harbour in December 1941, and had overrun the Philippines, Indo-China, Indonesia, Malaysia and Burma. It occupied Rangoon in March 1942 and the war had reached India's doorstep.

The manner of the British withdrawal from Southeast Asia in the face of the Japanese advance had created a very negative image in India.

The British had evacuated the white residents and generally left the subject people to their fate. There was a very genuine apprehension that they might repeat this in India.

The leadership of the Indian national movement were worried that the Indian people, demoralised by the news of British betrayal in Southeast Asia, might remain passive in the event of a Japanese attack.

A movement against the existing colonial power would help to create the mood for a possible struggle against a new colonial power.

Besides, high-handed government actions such as the commandeering of all the boats in Bengal and Orissa to prevent their being used by the Japanese in event of an invasion had alienated the people further.

Wartime shortages of essential goods combined with high prices added to the discontent.

Faith in British stability was at an all time low and there was a run on banks and deposits in post office accounts and hoarding of gold, silver and coins.

Thus, when the Congress met in Bombay in August 1942, there was already a mood of great agitation and expectancy.

In fact, on August 8, Gandhiji had said that he was not yet giving a call for struggle, but would give the viceroy a few weeks to respond.

The government, however, treated the August 8 resolution as a declaration of war by the Congress and decided to not give Gandhiji the time to build up the tempo of the movement.

Large-scale arrests of leaders immediately led to large-scale protests, even without the formality of an official launch of the struggle.

For the first six or seven weeks after August 9, there was a mass upsurge all over the country.

Crowds of villagers were seen courting arrest at district and tehsil headquarters, and also pulling out railway tracks.

Students in schools and colleges remained on strike and paraded on the streets in increasing numbers.

Many went out to villages to organise the resistance. They also wrote and distributed thousands of illegal newssheets.

Workers in Ahmedabad, Bombay, Jamshedpur and other towns struck work, often in connivance with their mill owners.

In eastern Uttar Pradesh and Bihar, the movement attained the shape of a rebellion.

According to official figures, in the first week itself, 250 railway stations, 500 post offices and 150 police stations were attacked and damaged or destroyed.

Repression was swift and severe.

The police and the military fired on 538 occasions, and villages were machine-gunned by low-flying aircraft.

Villagers were whipped, made to pay collective fines running to Rs 90 lakhs (Rs 9 million) and taken as hostages.

Entire villages were burnt if the inhabitants ran away to evade arrest.

In the name of the war, the British had armed themselves with draconian powers and completely suspended civil liberties.

Newspapers were gagged and many suspended publication.

The severe repression only succeeded in driving the movement underground.

They provided guidance, money, material and inspiration to underground groups all over the country.

Many people supported the underground movement by providing money, shelter, information and other kinds of logistical support.

We have it on Achyut Patwardhan's testimony that one of the three members of the high-level official committee formed by the government to track down the Congress underground regularly informed him of the goings-on in that committee.

The underground movement focused on disruption of communications and transport by cutting telegraph and telephone wires and derailing goods trains and on dissemination of news.

A very brave effort in the latter direction was the setting up of the Congress Radio, which regularly broadcast from different secret locations in Bombay till November 1942. It could be heard as far away as Madras (now Chennai).

Usha Mehta was one of those who organised it and Ram Manohar Lohia regularly broadcast on it, right under the noses of the British!

A fascinating aspect of the movement was the emergence of parallel governments in some areas.

A short-lived one was set up in Ballia in eastern Uttar Pradesh under the leadership of Chittu Pande in August 1942.

In Bengal's Midnapur district, the A Jatiya Sarkar government continued from December 1942 to September 1944.

It set up arbitration courts, did cyclone relief work, distributed surplus grain to the poor and set up an armed Vidyut Vahini.

In Satara district in Maharashtra, a prati sarkar set up in early 1943 with Nana Patil at its head, continued till 1945.

It set up peoples' courts, village libraries, enforced prohibition and conducted 'Gandhi marriages' to which the scheduled castes were invited.

Government collaborators and informers were dealt with severely.

The Quit India movement ensured that the British left India after the end of the war.

The mass support that it generated in such adverse conditions -- all the top leaders in jail and no civil liberties -- convinced the British that if they had to face another such movement in normal conditions, when they could not use the war as an excuse to use draconian measures, they would be in very deep trouble.

It was better, they decided, to leave with their prestige damaged, but not shattered.

As soon as the war ended, the Simla Conference was called, and it was followed by the announcement of the Cabinet Mission in February 1946.

The time to quit India had come. 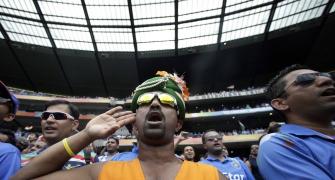 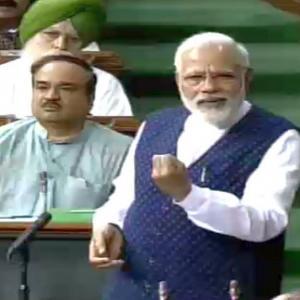 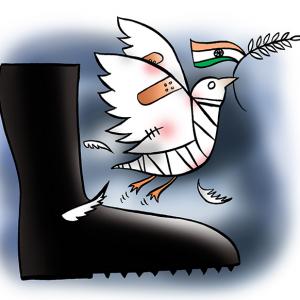 What reality will replace the dream of 1947?