Charles 'Biharilal' Thomson, is an Australian who speaks fluent Hindi learnt on the streets, trains and buses of India's hinterland.
Biharilal tells Rediff.com's Archana Masih how India has bewitched him. IMAGE: Biharilal Thomson with a sadhu at a yoga institute in Madhya Pradesh while travelling with his mother to see the Kumbh Mela in Ujjain. Photograph: Kind courtesy Charles Thomson/Facebook

Biharilal Thomson is a white Australian who speaks Hindi better than many Indians.

The first time he saw a non-white person was as a 10 year old. His mother had invited an Indian yogi from Bihar into their home in Australia and asked her son to share his room with the sadhu for a few weeks.

"I had only seen white Australians till then, not even native Aboriginals -- and here was an Indian in a langoti in my room!" he exclaims in good humour, sitting in a film producer's home in suburban Mumbai, wearing a kurta-pajama and a yellow stole.

In the two hour conversation, he only speaks Hindi, a language he learnt in the streets, trains and buses of Bihar where he had arrived at age 13 in December 1974.

He loved his new home on the banks of the Ganga so much that he did not return to Australia for the next 11 years. Accounts of his experiences in India's rural underbelly in the 1970s-1980s, include encounters with dacoits on horseback on at least two railway journeys.

"I saw real sadhus, I saw real dacoits -- and I thought I had reached an amazing place," says Biharilal with a grin. His life experiences, he says are so unbelievable that he sometimes thinks it is like a film.

It also reveals an India of another time -- one that was simpler, wilder, unfamiliar and distant from what it is today.

"India was friendly with the Soviet Union, and I came across Indians who were desperate to emigrate to the USA, Canada or UK -- not to the USSR."

"The other thing that was common was cycles. Only the DM (district magistrate) and SP (superintendent of police) had cars -- and in the trains people sometimes travelled with their own cooks!"

After going back to Australia in 1985, he returned to formally work in India in 2011.

India has seen a giant leap ahead since, and he has spent nearly 16 years here, but one question posed to him that hasn't changed over the years is -- "Why did you come to India?"

"This is what I am routinely asked, especially by the youth. They ask 'Why have you come here when we want to settle abroad?'," says Biharilal, who applied for Indian citizenship in 2014 and hopes to hold an Indian passport soon.

"The other thing I am amazed with is this craze for English. Even if I speak to those who know Hindi in Hindi, they reply in English!" 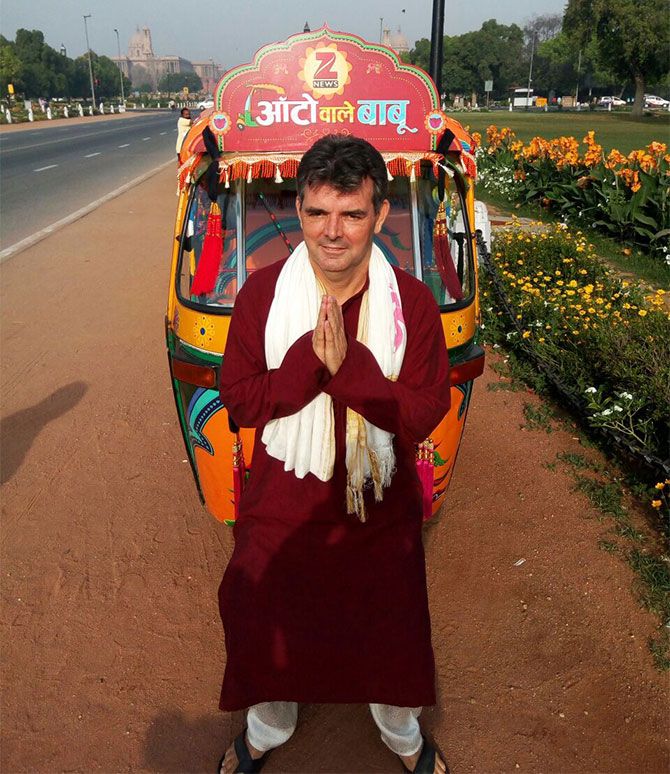 IMAGE: His show Autowale Babu on Zee News covering the Delhi municipal election in 2017 brought him recognition and people still refer to him by that name, he says. Photograph, Kind courtesy Charles Thomson/Facebook

His fluency in Hindi has fetched him invites to Hindi events by the Indian high commission in Australia, to symposia at Savitribai Phule Pune university and Delhi's Hansraj College. He has anchored a few film festivals and done some acting roles.

It has also brought him an FM radio show that he hopes to receive a confirmation for by April.

"In independent India it will be the first time that an angrez will do a radio show in Hindi," he says enthusiastically.

Not wanting to be boxed into roles of the typical gora speaking tooti-phooti Hindi, he refers to the accomplished actor Tom Alter.

"He is an asli Hindustani, I'm nakli, but because earlier directors made him speak broken Hindi like an angrez, people thought he was English."

"People didn't know he was Indian, a Padma Shri, who spoke fluent Hindi and Urdu."

Biharilal works at Josh Talks, a media company that invites guests to share inspirational stories. His focus is on all regional languages and tier-2 cities.

He has also done a few acting roles in Hindi and Marathi television serials, and recently appeared in an airline commercial for Scoot, a budget airline owned by Singapore Airlines.

There are quirky benefits to a white man speaking Hindi too -- like the number of wedding invitations he receives. Many wedding organisers in the Delhi area send him invitations only to have a foreigner on display!

"I get so many invitations for chief guest. In the marriage season, I'll be booked," he laughs.

"People want a gora who speaks Hindi to show at their weddings." 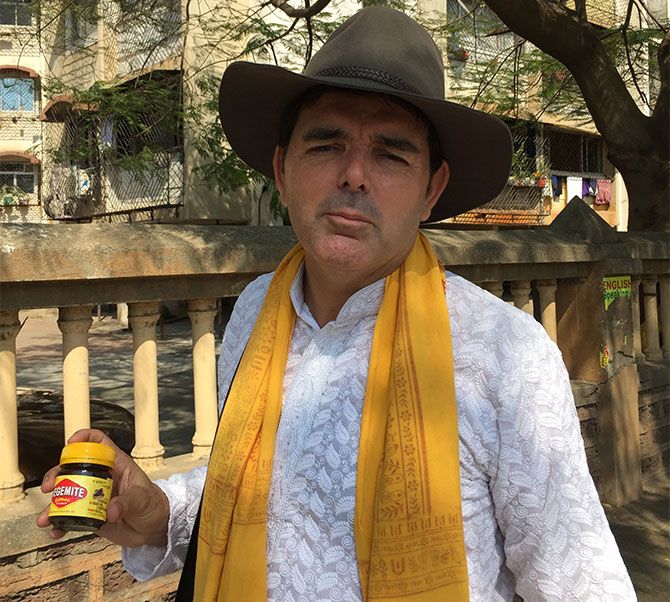 Charles Thomson has spent 16 years in India and has applied for Indian citizenship. Photograph: Archana Masih/Rediff.com

The move from Australia to India may have been a continental shift, but for Charles 'Biharilal' Thompson, it was like coming home.

It was a life introduced to him by his mother, a ballerina and an early convert to yoga, who came to learn at the Bihar School of Yoga in Munger in 1972.

"At that time only 1% of the world travelled by aeroplane," says Biharilal, who is often recognised as 'Biharilal Autowale Babu' after a show on Zee TV where he covered the 2017 Delhi municipal election in a colourful autorickshaw.

"We used to fly to the Gold Coast to visit my grandparents every year. I made my father promise that he would send me to India instead, if I stood 1st or 2nd in school."

He stood 2nd and travelled to Calcutta, he says, taking a train to Jamalpur and then a bus to Munger.

"I was shocked to see the poverty in Calcutta, but hearing 'garam chai' by tea vendors in the train was like music," he remembers.

Eight weeks later, his father returned to take him home.

"I told him I wanted to stay for one more year," he says over a cup of tea.

He has now spent 16 years in India -- first at the Bihar School of Yoga in Munger, then working in a financial tech start up Eko India, and currently in the entertainment industry.

At the famed yoga school in Munger, he says he learnt yoga and managed the library. He helped in the institute's office work which would take him to Patna and Delhi.

It was on one these travels that he found himself in the middle of a dacoity.

He had bought a third class ticket and boarded a train from Jamalpur to Patna in Bihar. The TT saw his ticket and upgraded him to first class. Along the way, dacoits came riding alongside the train, detached the first class compartment and started looting passengers.

When they reached his coupe, he held out his hands, and said, "Ruko, ruko! (stop, stop!)"

"I was a young boy and did not know very good Hindi at that time, so I just managed to ask a dacoit if he had any videshi friend?"

The dacoit said 'No' and Biharilal told him that he would be his friend.

"He smiled and did not take anything from me."

"When they came to me, I just sprang up and started chanting Bum, Bum Bole-Bum, Bum Bole and they said, 'Yeh toh Ganga jal wala aadmi hai' and let me go," he chuckles.

India was very different then, he says. Yoga institutes were very austere and drew only the most committed.

He remembers the first function he organised which had a generator as backup for electricity failure. When the lights went off and the generator was switched on -- the crowd left the sammelan and rushed to get a first glimpse of a generator at the back. 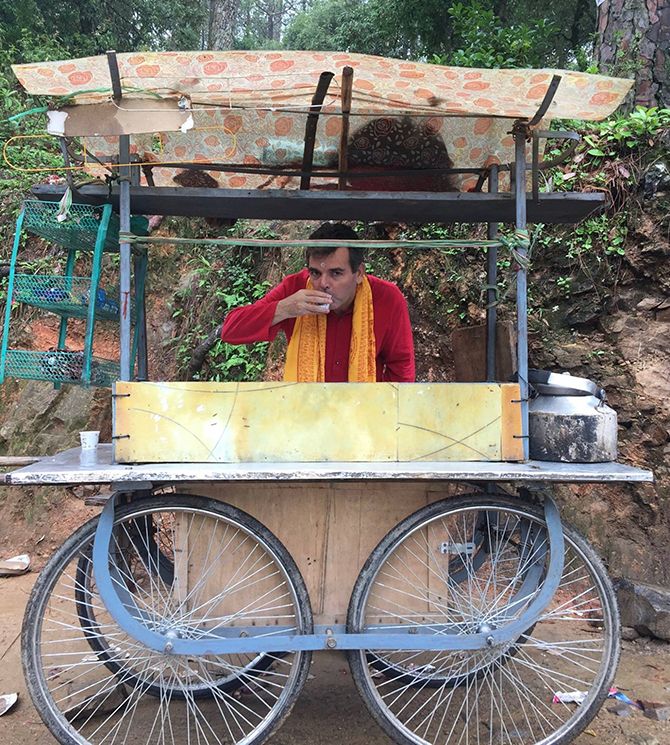 IMAGE: A tea break during one of his travels. He does yoga every morning, eats vegetarian food and prefers only tea for dinner. Photograph: Kind courtesy Charles Thomson/Facebook.

At fifty-seven, Biharilal has seen the arc of India's history from Indira Gandhi's Emergency to her assassination to the post liberalisation. He has travelled widely, even taken his mother to the Kumbh Mela.

In between, he returned to Australia and ran a Thai vegetarian restaurant but kept coming back to India.

"I started coming back in the late 80s, but visas were very difficult. Till the Modi Sarkar came, getting a visa to India was not easy. Sushma Swaraj is doing a good job," he says.

In 2009, a startup started by Biharis, Eko India, offered him a job and he moved to India.

But it was a chance encounter with an Indian student at a Sydney swimming pool that opened the door to acting.

Shashank Ketkar, now a popular television actor, had got talking to him by the pool hearing his Hindi and came to eat at his Thai restaurant.

Few years later, Biharilal would visit him on the sets of his show whenever he was in Mumbai. His kurta-pajama style of dressing and fluency in Hindi caught the eyes of the director and led to small roles. He also got to play an angrez in a Marathi film Shashank Ketkar was acting in.

"I went to Kolhapur and shot a scene where I was seated on a horse in 40 degrees heat. I loved it. I thought I had become Shah Rukh Khan!"

He has also acted in a Hindi suspense thriller that will release this year.

Every day, he receives a large number of messages on Facebook and makes it a point to at least say 'Ram, Ram' or 'Namaste' to them.

"I feel the whole of Hindustan is made for me. Yeh kamal ka desh hai, yaha aapko sab kuch mil jayega (this is a great country, there is nothing you can't find here)," he says, adjusting the famous Australian Akubra hat he is wearing and steps into the hot Mumbai sun. 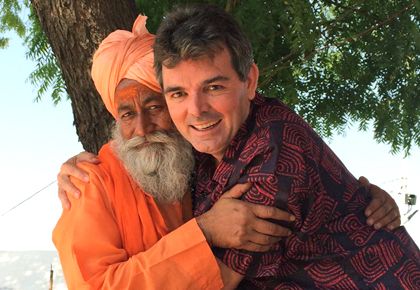 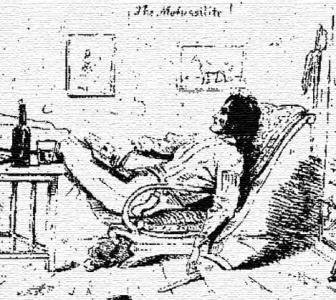 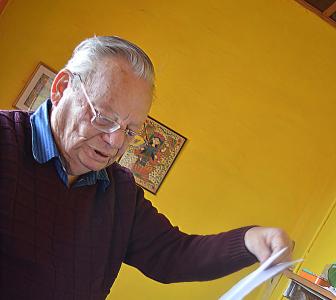 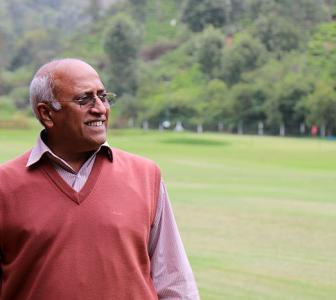 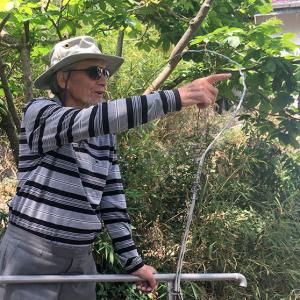