Seven farmers, same woes. Their stories represent thousands like them who have marched more than 200 kilometre from Nashik to Mumbai seeking redressal of their woes.

They all looked the same: with their red caps, the colour of revolution, symbolising their fight against the unjust system, and dark, wrinkled, scrawny faces betraying years of hardship, penury and abject poverty; they have marched from Maharashtra's Palghar and Nashik districts on foot on a 200-odd kilometre journey to the heart of India's financial capital in search of something as mundane as the right to live.

Most of them tribals, tilling lands their forefathers had tended to for generations; most of them are marginal farmers, with average landholding size less than five acres; most of them have been allotted plots of land by the district administration in 2005 with the assurance of making them the title holders of the land they were given; those among them who don't own land, work as farm hands or engage in odd jobs for their subsistence; all of them have marched on this arduous journey to demand implementation of their rights conferred on them under the Forest Rights Act.

Most of them, fortunately, were not burdened with debt and so had no idea what a farm loan waiver is all about.

Not too fluent in Marathi or Hindi, these tribals spoke about their hardships and explained why they embarked on a long march. Here are glimpses into the lives of seven such people. 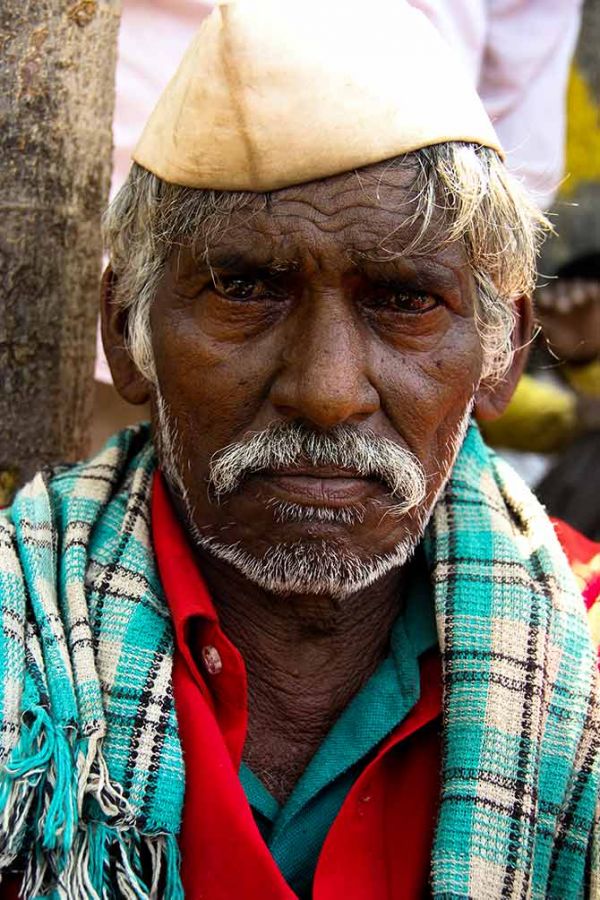 Living in a mud-thatched dwelling with his wife and three children, Diva and his family work as farm hands to earn a living.

The four months when the rains bestow its mercy in this tribal heartland, Diva gets work and also a small share of foodgrain like rice, ragi, black gram, and pigeon peas wherever his family works. It is the only time of the year that brings hope and joy to the Diva household.

The rest of the year, Diva and his family move out of their hearths in search of employment as labourers.

Diva and his ancestors have been tilling land since 1957.

Landholding: At first he didn't remember how much land he owns; then he suddenly recalled owning an acre of land 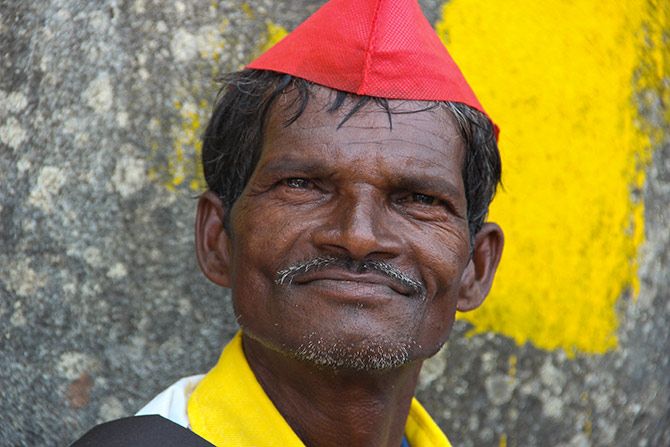 Kadale's main grouse, like that of so many others who surround him during this interview, was the title of his land, and lack of irrigation facilities once the monsoon is over; after the monsoon he moves away from his home in search of work.

With his wife and three children, Kadale's family of five grows green gram, wheat, and millet in his one-acre farm.

"My grandfather, father and I have been farming here for the last 20 years but the land still does not belong to me. It is still government land; I have come here with the demand that the land's title be transferred in my name," he says.

"I want implementation of the Forest Rights Act in letter and spirit," he says.

Landholding: Half an acre Sthale became a widow in 2003, when her husband died due to 'bimari (disease)'. She doesn't remember what exactly killed her husband. "But I was pregnant then with my only son," she remembers.

Sthale's son Ashok studies in Class X in a local school. Sthale, who has been staying with her aunt after her husband's death, owns just a small piece of land where she grows rice. But that too is under threat as the local tehsildar has already issued her a notice to vacate the land that takes care of her son's education and their subsistence.

Her land is Sthale's only hope to see her son get a decent education but that too now, she claims, is on the line.

"I hope this government accepts our demand for a decent living and clears our land titles," she says. 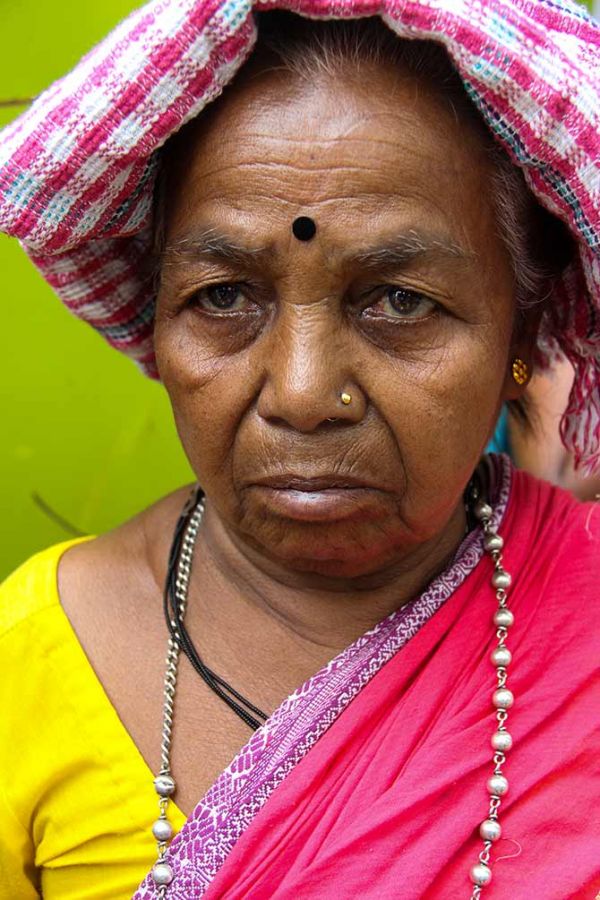 Kathe's grim face clearly articulates her hardships. Despite having two acres of farmland, she lacks adequate irrigation facilities, rendering her landholding unproductive when it doesn't rain.

When water is easily available during the rains, between June and September, Kathe and her son work hard to grow tomatoes, green vegetables and rice.

"But we don't get a remunerative price for our produce at the local mandi (bazaar)," Kathe says. "So, what we earn is not enough to see us through the rest of the year," she adds.

As a result Kathe and her son work as farm hands for some of the rich farmers in Dahanu, and earn Rs 150 per day as their labour's worth. "The work, though, is not regular," she says.

So Kathe and her son then move out to work in one of the many hazardous chemical factories that dot the industrial corridors of Palghar district.

"What else can we do when we don't have work? We need money to survive," she says.

Ask her about her main demand that has brought her to Mumbai's Azad maidan, and she says, "Let the government give us remunerative price for our produce. That will be some help." 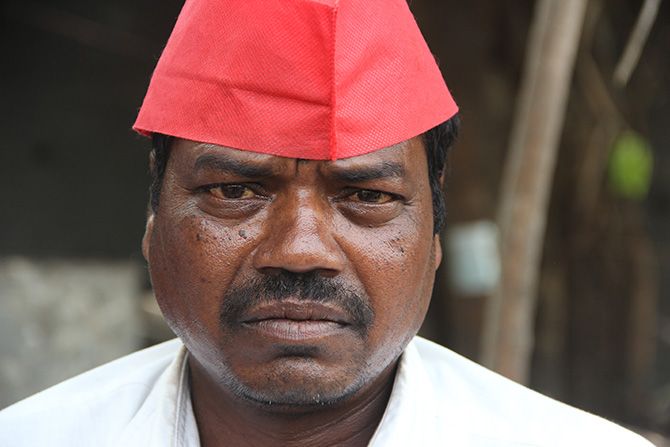 Jadhav, and two of his village folk -- Ashok Dashrath Barde and Ramchandra Rajaram Barde -- each own five acres of land in Kalwan. Their ancestors have been tilling their farms since 1957 but all three have a common grouse.

Affiliated to the Communist Party of India-Marxist, these three joined the Akhil Bhartiya Kisan Sabha's long march on the day it left Nashik on March 6. After spending three nights in the wilderness, these three were among those protesting passionately at Azad maidan. 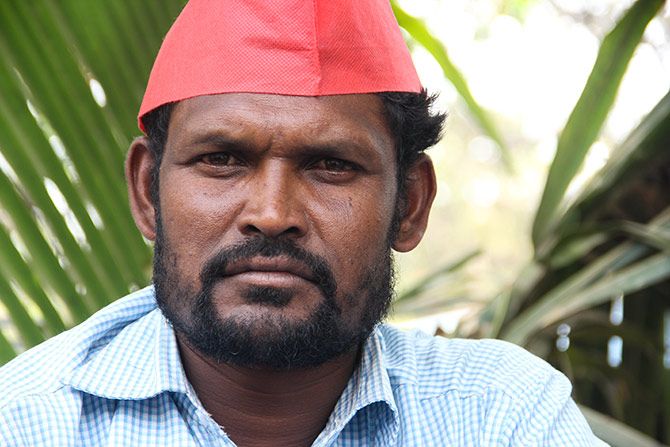 "It was because of the CPI-M that we have some voice in our village and district. It seems no other political party is interested in our welfare as farmers," says Ashok Barde (above).

All three grow foodgrains like jowar, ragi and rice once a year when it rains abundantly and water shortage is not an issue. 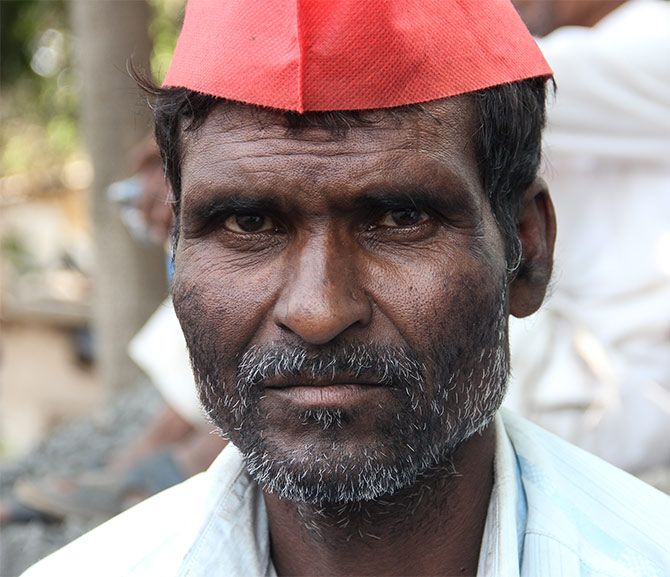 "In other months we become vagabonds and go out in search of work," says Ramchandra Barde (above). 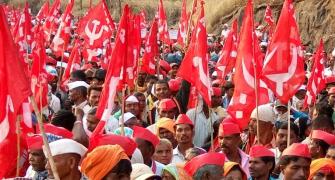 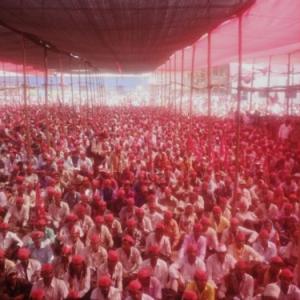