News
Business
Movies
Sports
Cricket
Get Ahead
Money Tips
Shopping
Sign in  |  Create a Rediffmail account
Rediff.com  » News » The Englishman who was more Indian than Indians

The Englishman who was more Indian than Indians Buried in a Kolkata cemetery is an Englishman who served India well during her struggle for freedom.
A close friend of both Gandhi and Tagore, Charles Freer Andrews was more Indian than many Indians of his time.
Rediff.com's Indrani Roy rediscovers the priest-teacher who was a benevolent force that neither Indians nor the British could ignore. 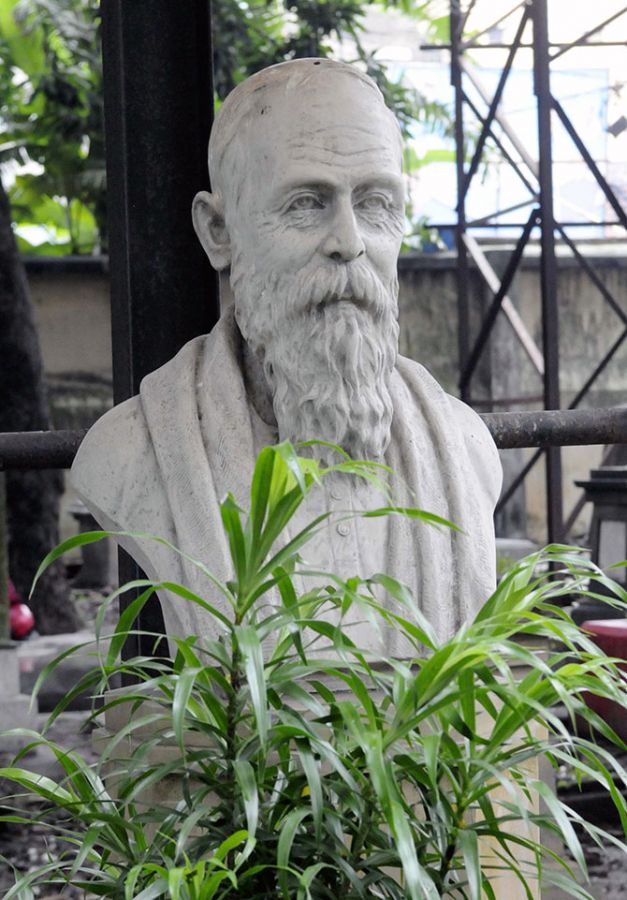 It is a wet morning.

We are on our way to the Lower Circular Road Cemetery in central Kolkata to look for Charles Freer Andrews' grave.

To Kolkatans, the Lower Circular Road Cemetery is mostly known for the graves of the poet Michael Madhusudan Dutt and his wife Henrietta Sophia White.

"Very few in this city are aware that it also has the grave of C F Andrews," Ashim Kumar Biswas, the cemetery secretary, says as he leads the way.

"In my long career here, I haven't seen much activity around this one," he says, pointing to Andrews' tomb that has the the inscription: The friend of the poor.

Many Englishmen understandably came to India during the British Raj. Some fell in love with this country and stayed back. History remembers only a few of them, says Professor Susanto Das, former head of Rabindra Bharati University's history department.

Of them, C F Andrews, a priest from the Church of England, an educator and social reformer, shines brightest.

In 1904, Andrews joined the Cambridge Mission to Delhi and arrived there to teach at St Stephen's College. Some years before my visit to the cemetry, St Stephen's alumni installed his bust by his grave.

Andrews taught at St Stephen's for ten years and became friends with many of his Indian colleagues and students.

Touched by the social and cultural injustice inflicted upon the Indians by the British, he became a part of the social and political movements of the day, and championed the causes of the labourers, railway workers and other downtrodden.

With his connections among influential people in England, he tried to arouse public opinion against the atrocities inflicted upon the colonised people in India, Fiji, South Africa and other parts of the British empire.

His love and compassion for the poor earned him the affectionate title, Dinabandhu, friend of the poor. Andrews first met Gandhi in Durban in January 1914, an encounter encouraged by Gopal Krishna Gokhale, one of the greatest leaders of his time.

Andrews was a key force at Gandhi's ashram in Natal and help the publication of the magazine, The Indian Opinion.

He also convinced Gandhi to return to India from South Africa and initiate a movement against British oppression in his mother country.

He then took upon himself the task of interpreting Gandhi to the West. He kept open the possibility of a dialogue between the Indian leaders and the British government, says Bandyopadhyay.

In a lecture delivered at the National Army Museum, London, on September 18, 2006, lawyer and columnist T Sher Singh said: 'In my readings on C F Andrews, I repeatedly came across people -- in India, in England, in different parts of the world -- who amazingly, over and over again, compared him to St Francis of Assisi.'

'My favorite quote on Andrews,' Sher Singh added, 'is from Sir Gordon Guggisberg, who served as the British governor of the Gold Coast (present day Ghana), and later of British Guyana.'

'Sir Gordon met with him, had discussions with him on various thorny issues, they had lunch together, and then, Sir Gordon saw him off at the door.'

'As the taxi drove away carrying Andrews -- an eyewitness describes this graphically -- Sir Gordon gazed after it with bowed head and fixed eyes... he breathed deeply (and said): "I feel as though I had been honoured to give lunch to Our Lord".'

Andrews decided to be a part of Tagore's Visva Bharati, an educational institution that was Gurudev's brainchild, after he met the poet in London in 1912.

Andrews was floored by Tagore's poetry when he heard them for the first time at William Rothenstein's house in London, the poems read no less by the acclaimed poet, William Butler Yeats.

Tagore's poetry had such a profound influence on Andrews that he roamed around the streets of London reciting On the sea shore of the world like a man possessed, the late writer Pramathanath Bishi wrote in his book, Purano Sei Diner Katha.

After Tagore won the Nobel Prize in 1913, Visva Bharati saw the arrivals of many foreigners, but of them Andrews stood out for the uniqueness of his character, Bishi noted.

In Santiniketan, Andrews was everyone's darling, Bishi, who had the privilege of working with the clergyman, wrote.

His presence at Shantiniketan will be written in gold forever, says Sabujkoli Sen, a senior professor at Visva Bharati. "When he and Tagore met for the first time in London in 1912, it was love at first sight for both," she told Rediff.com

After he arrived at Visva Bharati in 1914 with his friend W W Pearson, Andrews worked closely with Tagore in the making of Visva Bharati and travelled widely with the poet in India and abroad. He also translated many of Tagore's works into English.

Andrews was a soul besotted with the cause of the poor, Bishi wrote. He would give away money, food, even his clothes for charity. His heart wept for the downtrodden.

When Andrews wrote his life story, What I Owe To Christ, he earned a lot of money. 'He soon got rid of that wealth by providing for the education of one of our associates at Oxford University,' Bishi recalled.

Andrews was Tagore's constant companion -- he would read out newspapers to Gurudev or ferry him around Santiniketan in a rickshaw.

In the initial years at Visva Bharati, many parents did not pay the education fees on time and Andrews was entrusted with the task of collecting money from them.

On hearing that a sahib would be coming to ask for the dues, many parents would get scared. But in came Andrews, clad in a dhoti and kurta, with kind eyes and a golden heart.

The defaulting parents saw in him a friend, and not a collector.

Andrews worked in tandem with Tagore when he initiated the Brati Balak Sangha, an indigenous form of the Scout Movement, health cooperative, movement to uplift the condition of the tribals, especially Santhals, in and around Visva Bharati. 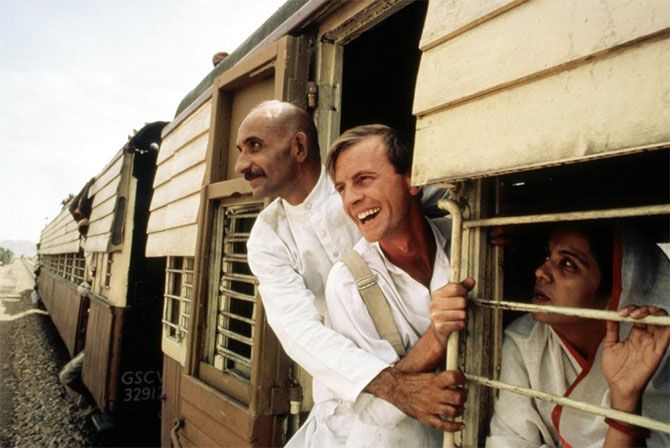 He was 'Charlie' to both Gandhi and Tagore.

The unifying force that brought Gandhi and Tagore together on a common platform, the duo's ideological and political differences notwithstanding.

In Gandhi, Andrews saw a leader with enormous potential to free India from the clutches of British rule, whereas in Tagore, he saw unparalleled creativity that could make age-old conventions stand on their head.

"What fascinates me most about Andrews is that though he arrived in India with an aim to propagate Christianity, he fell in love with this country and its people," historian Chittabrata Palit tells Rediff.com

Both Gandhi and Tagore had a huge influence on him and they expedited the process of his 'Indianisation,' Professor Palit adds.

Andrews arrived in India at a time when the people were desperate for freedom from British rule, adds Professor Susanto Das.

One of the few Englishmen who courted arrest for taking part in the non-cooperation movement, many Indians believe Tagore gave him the title Dinabandhu. "He was named thus by the indentured labourers of Fiji whose cause he fought for," clarifies Professor Sabujkoli Sen. 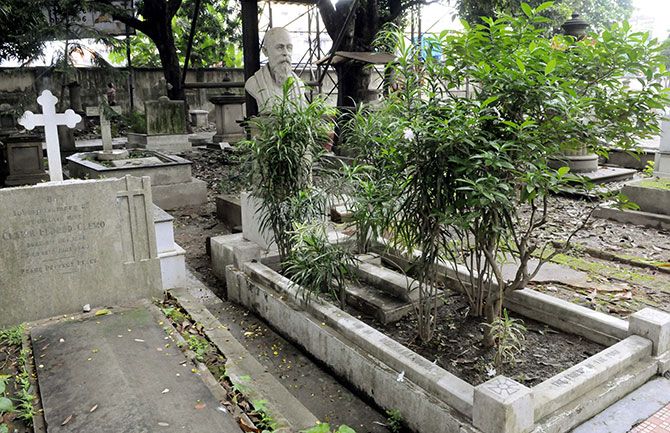 In 1925 and 1927, he was elected president of the Trade Union Congress. As a crusader against untouchability, he also worked with Dr B R Ambedkar in formulating the Harijan (Dalits) demands in 1933.

After taking an active role in India's fight for freedom, Andrews returned to England in 1935.

On his next visit to Calcutta in 1940, he was taken ill and passed away on April 5 that year. In those final days at a Calcutta hospital, C F Andrews refused to receive special treatment. He wanted to die among the common people, says Professor Sabujkoli Sen, those whom he worked for all his life.

A few days after Andrews' death, Tagore paid tribute in a song:

On the day Andrews died, Gandhi declared: 'I have not known a better man or a better Christian than C F Andrews.'