"There were 48 pellets in my body, out of which 35 were removed. The rest are still inside."
"Being part of the police force is very difficult under these circumstances, but I have no choice."
Compelling voices from the youth caught on both sides of the Kashmiri conflict.
Photographs: Cathal McNaughton/Reuters 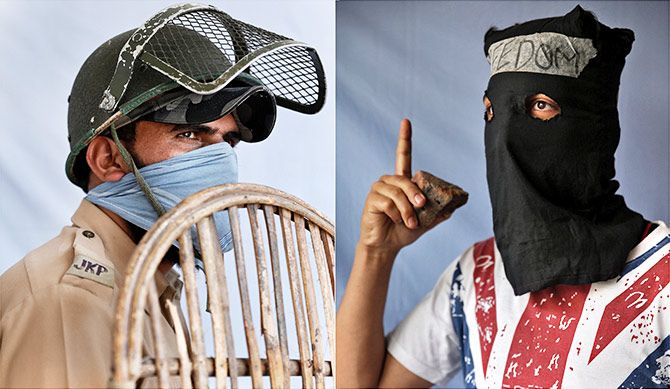 Police officer (25)
"I am the son of a farmer and joined the police as I had no job.
We are part of the same society, and using force against children is very difficult for us.
We try to exercise maximum restraint -- that is why we get injured."

Protester and student (18)
"I was hit by pellets last year during stone pelting,
and taken to a nearby hospital.
There were 48 pellets in my body, out of which 35 were removed.
The rest are still inside." Police officer (47)
"I've been in crowd control since 2008.
First, we chase the stone pelters.
We fire tear gas only when the crowd gets out of control."

Protester and student (19)
"My parents tell me not to do stone pelting,
but I do, as we want freedom from India.
I was hit by pellets in 2016.
Two pellets are still in my body." Police officer (31)
"I am the son of a farmer.
I joined the police as I had no job.
We exercise restraint during crowd control.
But when they get out of control, we have no choice but to use force.
It is very difficult to target our own people,
but it is our job and we have no choice."

Protester and student (19)
"My father is in the police.
I feel a stone is a more potent weapon than a gun.
We are being forced to resort to violence.
I feel violence is the best way to achieve lasting peace." 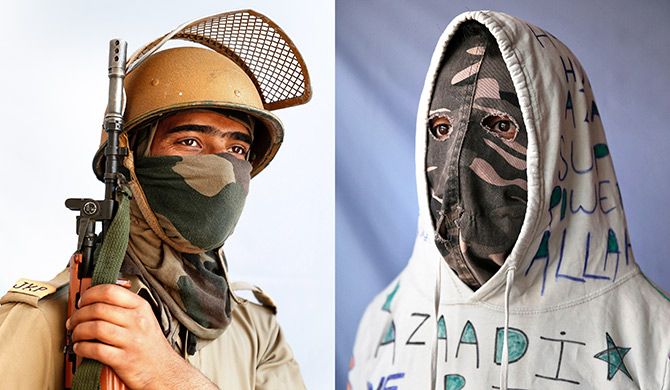 Police officer (25)
"I joined the police as I had no job.
We don't want to fire tear gas or pellets at the protesters,
but we do it for public safety after mobs go on the rampage.
We have to protect life and public property".

Protester and student (20)
"I was hit by pellets during stone pelting.
I have 80 percent vision in my right eye now,
but if I get a chance, I can pick up a gun." 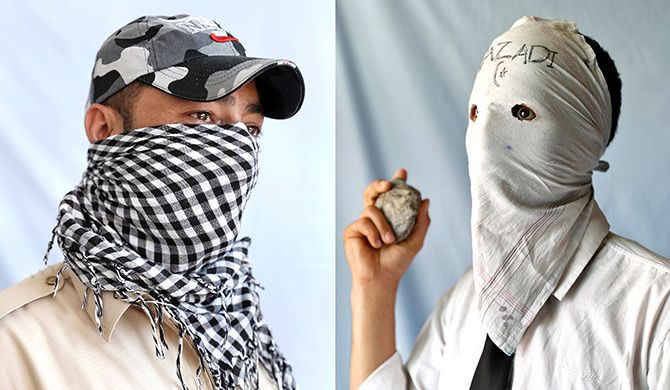 Police officer (24)
"I joined the police as I had no job.
Being part of the police force is very difficult for me
under these circumstances, but I have no choice.
Even our own children and relatives take part in these protests."

Protester and student (18)
"I will continue stone pelting to fight against Indian oppression in Kashmir.
I feel we will achieve our freedom by stone pelting." Police officer (23)
"I am the son of a farmer, and joined the police as I had no other job.
I have no regrets in joining the police.
I don't differentiate between who is pelting stones at us.
We have to act whether he is a policeman's son or someone else's.
For me, every stone pelter is equal."

Protester and student (23)
"If I get a weapon, I am ready to join the militancy,
but for the time being, the stone is our weapon.
My father is in the police, posted in Srinagar.
He used to tell me to join the police,
but now he does not insist." 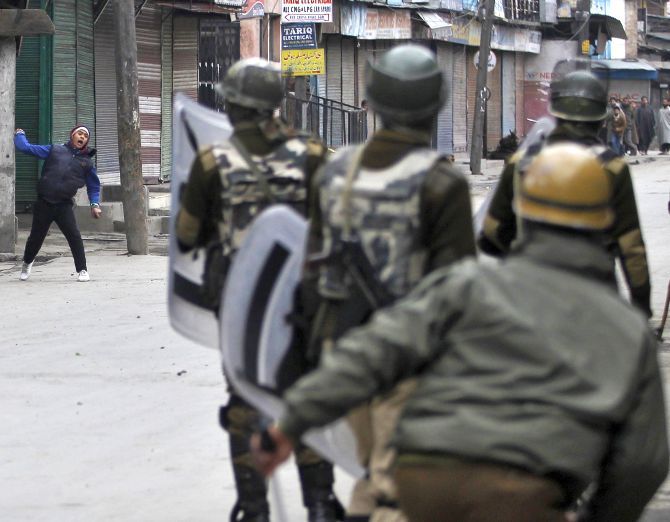