By A Ganesh Nadar
November 24, 2010 17:44 IST
What do Biharis think of the electoral verdict? A Ganesh called up citizens in the state to find out.

With the Nitish Kumar-led Janata Dal-United-Bharatiya Janata Party alliance sweeping the assembly election in Bihar, the cross-section of people I spoke to in the state appeared pleased with the results.

Dr Shehzad Alam, a teacher in Chhapra district in north Bihar, told Rediff.com, "We were hoping for this result. Nitish Kumar has laid the foundation for development. We now hope that lots of development will take place. The law and order situation has improved, but much more needs to be done. Corruption has to be removed from the police force. Power, roads and water supply has improved."

"Healthcare has become very expensive," Dr Alam adds, "government hospitals should improve to take care of the poor -- I think Nitish (Many Biharis refer to their chief minister by his first name, as they did his celebrated predecessor, Lalu Prasad Yadav) will do it."

Sushil Sharma, who runs a printing press in Chhapra, which Lalu Yadav represents in the Lok Sabha, is ecstatic. "I have no words to describe how happy I am. All Biharis are happy. The anarchy of Lalu Yadav has been abolished. We can see development in Bihar and we expect more development."

"This is a clear mandate on the issue of development," he adds. "Nitish Kumar's responsibility is more now. Even he would not have dreamt that he would win with such a great margin."

Sharma feels women voted for Nitish Kumar because of the free cycle scheme for school-going girls. The improved law and order situation was another reason. "There is no fear on the streets now and we know that it will further improve."

Vijay, a teacher in Patna, says, "We expected this result. It is the result of work and not only speeches. The NDA (National Democratic Alliance) has established a bridge over caste, creed and religion. Even Muslims voted for BJP candidates because of the faith they have in Nitish Kumar."

Anil Srivastav, another teacher in Patna, says he is happy with the electoral verdict because development has beaten caste combinations. "Women and children are happy because there is peace. Law and order has improved. Hospitals are better now -- we had the Congress for 40 years and the Rashtriya Janata Dal for 15 years -- nothing happened. In five years, Nitish has done lots and we hope for more development," he says.

Ajay, a businessman in Patna, is also happy that development has triumphed over caste barriers. Caste politics, he feels, was rampant during Lalu Yadav's tenure, but not any more.

"Biharis around the country are proud that the bad opinion about the state has changed," he says. "Peace has prevailed. The crime rate has dropped. There was a time when men could not go out after sunset, now women and children can go out. There is no fear."

Zohra, a teacher in Chhapra, says her students are happy because schools are run better now. More teachers have been recruited. "Roads are being laid where earlier there were none," she says.

ALSO READ: The true winners are the people of Bihar 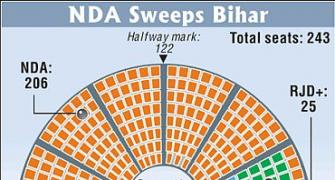