'Chavan is far, far better than any Maharashtra politician today'

By Sheela Bhatt
November 10, 2010 13:33 IST
Prithviraj Chavan 'will resist the obvious temptations of cutting deals that comes our way, daily.'

Congress colleagues share their impressions of Maharashtra's next chief minister with Sheela Bhatt.

"There was hardly any choice," a senior Congress leader said about Congress President Sonia Gandhi's selection of Prithviraj Chavan as Maharashtra's next chief minister.

Chavan, currently the Union minister of state in the Prime Minister's Office, won the coveted seat of power because two Congress stalwarts were nixed in one stroke because of their alleged involvement in the Adarsh housing society scam.

Former chief ministers Vilasrao Deshmukh and Sushil Kumar Shinde could not thus be considered to succeed Ashok Chavan who resigned as chief minister for his alleged involvement in the Adarsh controversy. Former Shiv Sainik Narayan Rane, the state's revenue minister, is seen as unreliable by most Congressmen.

It is not often that a scam about an urban skyscraper drowns three politicians in one stroke.

Prithviraj Chavan is now in the forefront by default, not just because the taint of corruption trapped his colleagues, but also because he is a Maratha, the caste that dominates Maharashtra politics.

Chavan, who more than anybody else understands the realities of his ascendancy in the world of real power, will have to tread the difficult path in political management of a state where he does not have robust grassroots connections.

Sonia Gandhi called Nationalist Congress Party leader Sharad Pawar on Tuesday and briefed him about her choice. The Congress-NCP alliance government rules Maharashtra, and Pawar's approval of the next chief minister is considered critical.

Pawar calculated that Balasaheb Vikhe-Patil, who was also in the race, could prove difficult because of the veteran Congressman's strong hold over the Marathwada region.

Prithviraj Chavan has long been an adversary of Pawar and his party. But Pawar apparently thinks Chavan will be politically weaker than Vikhe-Patil, points out a senior Congressman closely involved in Maharashtra politics.

Congress sources say Chavan, who is a member of the Rajya Sabha, will choose to become a member of the Maharashtra Legislative Council instead of fighting an assembly by-election.

Chavan has been a bridge between the Congress party and the Prime Minister's Office because he enjoys Dr Manmohan Singh's complete trust. His selection as Maharashtra chief minister will create a void in the PMO that will not be filled till the next ministerial reshuffle takes place.

Though party workers think Chavan lives in "his own world," a senior colleague believes "Chavan is far, far better than any Maharashtra politician today in terms of probity in public life. He is a family man. He will resist the obvious temptations of cutting deals that comes our way, daily."

Chavan is an open-minded politician, who believes in liberal politics. He is media savvy and knows the importance of the opportunity that has come his way today.

A Bachelor of Engineering from BITS, Pilani, and a post-graduate from the University of California at Berkeley, Chavan, who will turn 65 next March, has not seen many adversities in life.

He loves to talk about engineering and is absolutely committed to fast-paced scientific development within India. He even went to inaugurate India's Antarctica to South Pole expedition. He has researched the computerisation of Indian languages as well.

He enjoys Thai food, his Blackberry and cherishes gossip sessions with friends. Unlike most Indian politicians he opens up quickly.

These last four years, he has made connections with the bureaucracy and politicians in his home state, Maharashtra.

Says a veteran Congress leader, "He won't find it difficult to run the state administration, but his political management will be the real challenge. While Chavan proves himself, the Maharashtra government will remain stable for the coming two years at least."

The challenge facing Chavan cannot be underestimated. He has been put in high political orbit by the force of circumstances, but now he will have to use his chief ministerial powers and authority to balance various interest groups and in the process carve out a political base.

His hometown of Karad in Maharashtra's Satara district will rejoice today. His family home at Patan colony in Shaniwar Peth in Karad will get political attention after a long time.

His supporters would like him to take risks and show political strength by taking tough decisions to lift the Congress's poor image in the state.

It will be closely watched how Chavan navigates his way through the political minefields of the state's sugar lobbies, real estate mafia and Mumbai's corporate world.

One wonders how he will emerge from the shadow of the party high command in New Delhi and emerge as a leader of consequence in Maharashtra.

The Congress culture is such today that the Congress leadership's nomination of a particular chief minister for whatever compulsions in no way ensures the continued support of party cadres through thick and thin.

That will be the sobering advice Andhra Pradesh Chief Minister K Rosaiah can give Prithviraj Chavan.

In spite of the backing he has received from the Congress high command, Rosaiah, who succeeded Y S Rajashekhar Reddy when that chief minister died in a helicopter crash last year, is fighting a losing battle for survival.

ALSO SEE: From Centre's backroom to the hot seat 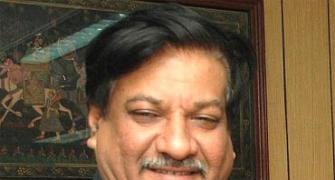 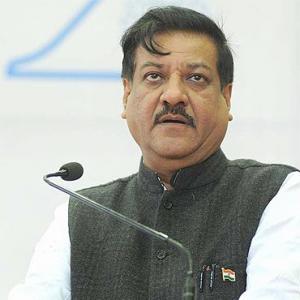 Prithviraj Chavan: From Centre's backroom to the Maha seat 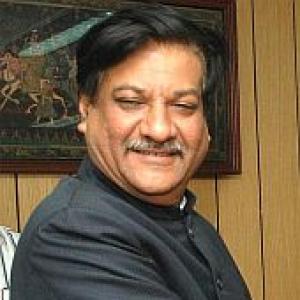