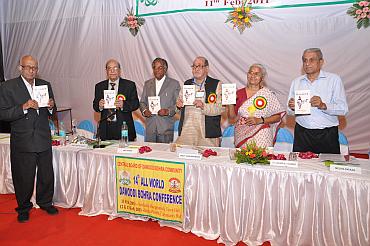 Yogi Sikand chronicles the voices for change in one of India'sï¿½richest and most progressive Muslim sects -- the Dawoodi Bohras.

Dawoodi Bohras are one of the many branches of the Ismaili arm of the Shia Muslim sect. Throughout their chequered history, the Ismailis have faced numerous dissensions over succession to the post of imam, whom they believe to be appointed by God as the deputy of Prophet Mohammed.

The Dawoodis belong to the Mustalian branch of the Ismailis, and believe that their 21st imam, Tayyeb, who resided in Yemen, went into seclusion, and that in his absence he had appointed a dai-e mutlaq, a deputy with absolute power over his followers, to control the community. Faced with violent opposition from Sunni Muslims, who regarded the Ismailis as heretics, the Mustalian-Tayyebi Ismailis, led by their dais, carried on an underground religio-political movement for several centuries in Yemen. But when Sunni opposition became intolerably severe, the 24th dai shifted his base to Gujarat.

Following this, missionaries of the sect made numerous converts in Gujarat, particularly among Lohana traders (called Bohras in Gujarati). The Dawoodi Bohras, the largest of the various Bohra groups, are followers of the 27th dai-e mutlaq, Syedna Daud-bin-Qutb. The present dai-e mutlaq, Syedna Burhanuddin, is the 52nd in line. Today, this man finds himself in the centre of a brewing controversy, faced with angry protests from growing numbers of reformist Bohras amidst allegations of massive corruption and dictatorial control.

With a population of just over a million, the Dawoodi Bohras are one of the smallest of the numerous Muslim sects. Earlier this month, several hundred Dawoodi Bohras gathered at Udaipur for the 14th World Dawoodi Bohra Conference. The thrust of the conference was to galvanise the ongoing movement within the community against what the organisers described as the draconian rule of their spiritual head or dai-e mutlaq, Syedna Burhanuddin, whom some of them lambasted as running a parallel State of his own.

In his address to the Udaipur conference, noted Islamic scholar and social activist Asghar Ali Engineer, general secretary of the Central Board of the Dawoodi Bohra community, recounted how the Syedna and his cronies in the Kothar, the Bohra religious establishment, have consistently sought to scuttle the reformist movement, not hesitating to use force in many cases.

In an interview with this writer, Engineer spoke of the total control that the Syedna imposes on his followers, including demanding that they prostrate before him, although in Islam prostration is to be made only before God. He referred to Syedna Burhanuddin's father, Tahir Saifuddin, the 51st dai-e mutlaq, wherein in a statement made in the Bombay high court he even declared himself to be 'God on earth' (ilah ul-ard), a claim that is unambiguously un-Islamic. He added that the Bohras are made to believe that if they disobey the Syedna,they will certainly be bound to hell.

Over three days, dozens of Bohra men and women expressed their anguish at the oppressive and corrupt practices of the Syedna and his vast family of a thousand members and at the persecution that they continue to unleash on those Bohras who dare to question them.

Abid Adeeb, president of the Udaipur Dawoodi Bohra Jamaat, spoke of how the present Syedna levies a number of taxes on the Bohras that had no sanction in Islam. Through his representatives or amils, he said, the Syedna extracted several crores of rupees from his followers annually, demanding payment on almost every conceivable occasion. Even prayer spaces in Bohra mosques in the month of Ramzan are now up for sale, he revealed. As a result of this, he said, the Syedna now presides over a multi-billion dollar empire. Adeeb opined that opposition to the Syedna's crass exploitation was mounting among many Bohras, but that they were too scared to speak out.

Those who dared to do so, like the reformist Bohras gathered at the conference, are immediately excommunicated. Their social ties with their community are severed. Adeeb recounted numerous cases of excommunicated dissidents being forced by the Syedna and his cronies to divorce their spouses. The reformists had taken the issue of barat, the power of excommunication that the Syedna claimed for himself, to the courts several years ago but, Adeeb lamented, the case was still pending. He noted that various political parties were hand-in-glove with the Syedna, owing to the vast economic clout that he wields and the votes he can deliver, because of which these parties are, he alleged, indifferent, if not hostile, to the demands of the reformists. He pointed out that the Syedna even had close links with Narendra Modi, despite the fact that Bohras, along with other Muslims, had suffered immensely in the anti-Muslim violence in

Gujarat in 2002 which the Modi government had instigated.

He also claimed that the Syedna routinely paid various Sunni Muslim institutions money so as to project himself as a pious Muslim as well as to buy their support and their silence on his un-Islamic practices and exploitative ways. Likewise, he said, the 'mainstream' media, which routinely sensationalises Muslim issues, had largely ignored the scandals that abound in the Bohra religious establishment.

'The Syedna spends vast sums of money to place advertisements for himself in the newspapers, and I would not be surprised if the Kothar pays some media persons hefty sums to keep off writing on the corruption of the Bohra religious establishment or to praise the Syedna,' he added.

Zainab Bano, president of the Bohra Youth Association Udaipur, and head of the department of political science in Udaipur University, spoke of the origins of the reformist movement in Udaipur in the 1970s,

when a group of reformers rose up against Burhanuddin's oppression.

She recounted the torments they have had to suffer over the years as a result, including being beaten up by Burhanuddin's men, being forcibly divorced from their spouses, banned from Bohra mosques and denied access to graveyards. She pointed out that the present Syedna had invented new titles for his sons and daughters, styling them as 'princes' (shehzada) and 'princesses' (shehzadi), which was a complete departure, she said, from precedent. He had, she added, appointed key members of his family as amils in towns with a sizable Bohra population, and many of them had amassed vast fortunes by levying a host of taxes on Bohras and through shady deals.

The 70-year-old Saifuddin Insaf, one of the pioneers of the Bohra reformist movement and editor of the reformist journal Bohra Chronicle, traced the degeneration in the Bohra priesthood to the 47th dai, Abdul Qadir Najmuddin, great-grandfather of Syedna Burhanuddin, who had established hereditary rule, although before his time the position of dai was not limited to a single family.

Earlier, dais lived simple lives, he claimed, many of them dying in penury. But from the 47th dai onwards, and particularly with Burhanuddin's father Tahir Saifuddin, things rapidly began to change as the economic conditions of the Bohras improved under British rule. This led to the dais and their cronies revelling in luxury and imposing new taxes on the Bohras that had no historical precdent. He pointed out how Tahir Saifuddin had deviated from the stance of earlier dais by claiming to be not just the religious head of the Bohras but even 'the lord and master of their lives and properties' (jan-o-mal ka mailk).

Accordingly, he had illegally usurped vast properties of rich Bohras, including a lavish palace on Malabar Hill, home to Mumbai's ultra-rich, that once belonged to the Bohra industrial magnate Adamjee Peerbhoy, which he had christened after himself as Saifi Mahal and made into his personal residence.

In order to dispossess the Bohras of the numerous trusts that Bohra philanthropists had set up across the country, the present Syedna had gone so far as to claim to be their sole trustee. The reformists had challenged this claim in the courts years ago but, Insaf lamented, the verdict was still pending.

'Through a carefully-conducted media campaign, the Syedna and his cronies want to create the impression that they are helping the community, but this is sheer rubbish,' Insaf alleged. 'He collects vast sums from the Bohras, and then sends out a few lakhs here and there to his amils to distribute so as to project himself as a do-gooder. Even this paltry amount does not reach the poor, as many amils are neck-deep in corruption.'

Insaf revealed that in order to impose total control on the Bohras, the Syedna insists that no Bohra can pray in a mosque or marry without his permission. 'This is a complete violation of Islamic teachings. It is is a tool to ensure complete slavery. If a Bohra marries without the Syedna's permission, the marriage is considered illegal and the offspring of that union illegitimate,' he explained.

He spoke of how Tahir Saifuddin had invented a new rule demanding that every Bohra adolescent give an oath of allegiance (mithaq) to him, rather than, as in the past, to the imam who is believed to be in seclusion. This new oath insisted on complete surrender to the Syedna's will, and required that every Bohra declare himself to be the 'slave of the Syedna' (abd-e syedna).

The present Syedna, he said, continues with this mithaq, which he castigated as 'wholly un-Islamic'.

Mumbai-based journalist Moinuddin Ajmeri, whose Urdu weekly Sirat has, for over five years, hosted a regular column exposing the corrupt and oppressive practices of the Syedna, described the Bohra Kothar as a 'mafia in the name of religion'.
'Burhanuddin was born in a broken-down house in an obscure lane in Surat, but now is so rich that he and his cronies are funding a several hundred crore rupee building project in Mumbai today. How did he get so much money?' he alleged. 'His family has around a thousand people who are spread throughout the world as his agents who, by taxing the Bohras, have become multi-millionaires. The Syedna earns crores from his followers but spends almost nothing on their welfare. When the reformists began pointing this out, he was compelled to save face by launching some so-called welfare schemes for poor Bohras, but even these are wracked by corruption, and hardly anything reaches the needy,' he claimed.

Next month, Burhanuddin turns a ripe 100 years old, and lavish preparations are underway to celebrate his centenary. Conference participants revealed that instructions have been sent to every Bohra family to cough up a substantial amount of money to fund his birthday revelry.

Speaker after speaker also spoke of battles behind the scenes between rival factions among Burhanuddin's several brothers and sons to succeed him as head of the vast empire he controls, since he has not as yet revealed his successor.

Spreading light through the minarets