Where the great Mughals lie

475 years after he was laid to rest, Zahiruddin Muhammad Babur Mirza is back in the news. Thanks to Indian Prime Minister Manmohan Singh.

On the agenda for his two-day visit to Kabul was a visit to Bagh-e Babur, on the outskirts of the city, where the first of the Mughal rulers is buried (Dr Singh at the tomb).

From 1526 to 1857, Mughal rule in India spawned tremendous developments encompassing art, architecture and language. The authors of that era, the great Mughal emperors, now rest in forgotten corners across Asia, resurfacing only when leaders of today come visiting.

Born on February 14, 1483 in Andijan, Central Asia, Babur (1483-1530) arrived with royal blood coursing through his veins. His mother was a descendant of Ghengis Khan; his father, of Timur the Lame (Tamerlane), who conquered and ruled Samarkand. Babur tried controlling Samarkand too, but failed. He opted for the Sultanate of Delhi instead, then controlled by Turkish Sultan Ibrahim Lodi.

In 1526, after crushing Lodi, Babur created his dynasty of Mongol warriors -- the Mughals. He died suddenly of fever, four years later, leaving the kingdom to his son Humayun.

Buried in a garden in Agra (some believe it is Ram Bagh), his body was moved to Kabul nine years later, as per his wishes.

Humayun (1508-1556) -- known as the luckless one -- came next. History remembers him as the emperor who almost lost his empire soon after it was created. He was overthrown by Sher Khan, a rival sultan from Bengal, in 1540, and exiled to Persia.

When Sher Khan died, Humayun attacked Delhi, reclaiming his lost sultanate in 1555. Tragically, he enjoyed his rule for just another year, dying after falling down the steps of his library. His tomb garden was built at the south of old Delhi -- a few kilometres from the city centre at today's Connaught Place -- under son Akbar's rule. It was conceived as an imperial family tomb with chambers for future emperors, but this didn't happen. He still lies alone.

The Shah of Shahs, Akbar (1556-1605) initiated what is now recognised as the Mughal dynasty's greatest period. Apart from extending his rule across most of north India and Pakistan, including independent states like Gujarat and Rajasthan, Akbar was the most respected of Mughal emperors. He was also the most travelled, thanks to his habit of re-assembling his capital in a different city every ten years or so.

After five celebrated decades of rule, he died in 1605 and was buried in a tomb garden at Sikandra, a short distance from Agra. The tomb doesn't have a dome, and ends with a marble pavilion instead. Interestingly, at the time, marble was reserved only for the tombs of Muslim saints.

If Akbar's death didn't throw the empire into chaos, it was only because of his son Jehangir (1569-1627), who ruled for two decades. His name, adopted after he was crowned emperor, means 'Holder of the world', although he left little apart from a memoir behind. He was buried in a tomb garden (image alongside) at Shahdara, outside Lahore in Pakistan.

Of all Mughal emperors, the one with the most beautiful tomb is Shah Jahan (1592-1666). Which makes sense, considering he is known for world-renowned examples of architecture like the Red Fort and Jama Masjid. Yes, he constructed the 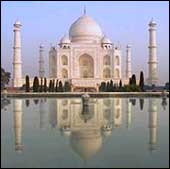 gorgeous Taj Mahal along the banks of the Jamuna, for his wife Mumtaz Mahal who died during childbirth.

Overthrown by his son Aurangzeb, Shah Jahan was imprisoned in the Octagonal Tower of the Agra Fort. He stayed there, forgotten, amid the grand city he had built, until his death eight years later. He now lies beside Mumtaz, in the world's most famous mausoleum.

Surprisingly, the tomb's placement at the far end, rather than the centre, has led scholars to believe it was always intended to be the emperor's tomb. And considering the throne of God is always depicted at the end of the garden of paradise, Shah Jahan must have thought rather highly of himself.

The years that followed were dark, belonging as they did to Aurangzeb (1618-1707), the intolerant one. Making enemies was, by all accounts, what he did best. In his quest for power, Aurangzeb overthrew his father and executed his brother, Dara Shukoh. During his 49-year reign, he did expand the kingdom, but failed to maintain it. His death left a weak empire that was ripe for exploitation. The Persians, followed by the British, were quick to pounce.

As for Aurangzeb, that proud, ruthless emperor rests in a simple tomb with no mausoleum, at Khuldabad, 25 kilometres on the road to Ellora in Aurangabad.

Finally, many moons later came Abu Zafar Sirajuddin Mohammed Bahadur Shah Zafar (1775-1862), son of Akbar Shah II, last of the Mughal emperors. A weak ruler, Zafar's reign was witness to unrest, British domination and the First War of Independence of 1857. He was nominated as a leader by nationalist forces and captured when the rebellion failed. Sadly, his sons were executed in his presence, and their severed heads presented to him.

The British exiled him to Rangoon (now Yangon, Myanmar). With his removal, the Mughal dynasty came to a close. The title Emperor of India was taken by Queen Victoria. Bahadur Shah died in exile on November 7, 1862 and is buried near Shwe Degon Pagoda, Yangon.

Scholars believe a number of Mughal emperors set their tombs in gardens to represent their nomadic past as well as to express a desire to settle. Of those glorious lives, little remains, apart from dusty plaques. It is funny what time can do.

The last emperor, who was also an Urdu poet, used this as his epitaph:

Of what bad fate is Zafar!
For burial, even two yards of land were not to be had, in the land of the beloved